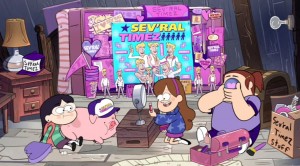 Dipper sees Robbie win Wendy over with a suspicious looking CD and becomes convinced that she’s being mind-controlled; meanwhile, Mabel and her friends discover that the members of their favorite band, Sev’ral Timez, are actually vat-grown clones and decide to save them from their manager by hiding them in Mabel’s room.

This is it. This is the episode when the show finally figured out how to start sending off Dipper’s crush arc in an interesting way, and to let Wendy be an actual character in her own right (though she’ll always be the most secondary of the main group). The fact that it came with a hefty edge of willingness to acknowledge how they’d fumbled this subplot in the past is a nice bit of icing on top.

Half the reason “Boyz Crazy” works as well as it does is because of how Mabel’s plot is executed. The “boy bands are actually mass-manufactured” gag is a rather culturally prevalent one—it’s hard to avoid, if you’ve read even a little bit about the mercenary tactics of Lou Perlman and his ilk. And it means that this episode has a built-in reason for multiple montages and a lot of silly sight gags to play with; everything about the Sev’ral Timez boys is on point, from the clash between their manufactured 90s color palette and the reality of the Shack to their blank-eyed designs. Maybe knowing that the joke had been made before, the writers decided to answer by tackling it with everything they had. And it’s always nice to see Mabel getting the main spotlight, even in a fairly by-the-numbers friendship plot (I’ll take any excuse to have Candy and Grenda around).

But Mabel and Dipper’s plots strengthen each other as a unit. Dipper’s plot is likewise fine enough on its own: he finally crosses over the line into convincing himself he needs to save Wendy and thus earn her affections as a prize without even, y’know, talking to her or treating her like a person (with a nice speech from Wendy herself at the end just to drive the point home). It’s the ultimate extension of his previous over-complicated plans to “win” Wendy, played this time with an understanding of how messed up that whole mentality is.

The supernatural element of the episode, which could so easily have been played as a means of actually rendering Wendy helpless, is instead a crutch that gives Dipper a reason to dismiss Wendy’s ability to make decisions on her own (which is the crux of 99% of these “she just doesn’t KNOW that she’s with the wrong guy” plots)—right up until it shoots him in the foot. In fact, one of the best parts of the episode is the fact that the entirety of the adventure could be explained away as something completely mundane. The messages don’t have an unavoidable effect, and the cover could easily have been made by or marketed to angsty teens. It’s never the point, making it one of the best subtle misdirects on the show.

And it’s contrasted perfectly against Mabel’s adoption of her pet boy band: characters who are literally created to be objects of desire, packaged and sold to an audience. And they are pathetic. Hilariously so, but pathetic nonetheless. Showing the audience a person who’s created solely to play to someone’s desire for a relationship is a great way to drive home the point of the B-plot. It also implies that the real emotional core of Mabel’s story is her relationship with her friends. The object lesson is never overtly connected; the script just stands the two next to one another and trusts that the viewer can draw the necessary comparison.

And, as always, any romantic relationships are never as important as the platonic ones, with Mabel and her friends reasserting their connection while Dipper and Stan finally get the chance to bond (even if Stan gives terrible advice). 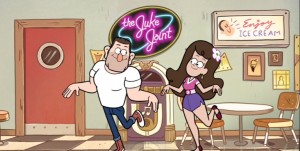 Carla McCorkle. Even now the name locks my eyes into a thousand yard stare. There were so many theories about that character, from the belief that she and Stan were married to betting that she would reappear in season two and somehow be important to the plot. The majority of the fandom’s theories worked off the belief that Stan’s self-aggrandizing story about Carla leaving him because she’d OBVIOUSLY been hypnotized against her will by some other man (rather than just choosing someone else over him) was an actual account of supernatural events—which didn’t gel with Stan’s role to this point as someone firmly trying to dissuade Dipper’s dabbling in the weirdness around Gravity Falls. As opposed to, y’know, Stan lying to make himself sound better in hindsight.

Eventually this reached a full-on fan character point not seen by yours truly since the days of Death Note fandom’s obsession with Matt—a state of affairs that remained pretty firmly in place as a camp of fandom theory until another cipher fully debunked the whole idea of Carla’s importance in Stan’s life almost an entire season later. 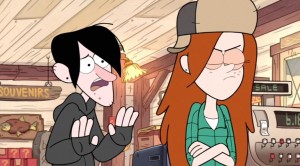 CREDITS CIPHER: “Happy now, Ariel?” (Ariel, for those not in the know, is Alex Hirsch’s sister.)

In the realm of references, the case for Robbie’s CD resembles the Necronomicon—which is a doubly clever reference, since things went bad in the original Evil Dead when the Disposable Meat listened to taped recordings of the Store-Brand Necronomicon being read.

Stan also makes two comments about the apocalypse this week (“storing meat for the apocalypse” and “you’ve been buying gold, right?”) which will both receive callbacks down the line. Whether Stan actually knows about some specific portent or has simply adopted some doomsday prepper advice in order to cover all his bases is anyone’s guess. 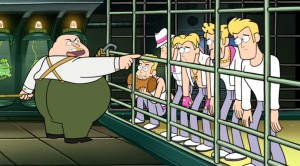 Light on the spoiler talk this week, since most of the best parts of this episode are in the moment. It’s always a little bit of a question mark exactly how much Stan knew at this point—Journal 1 definitely had a lot of doomy sounding portents, but a lot of them were in invisible ink (way to effectively warn potential readers about the apocalypse situation there, Ford).

Also, nice to know that those beautiful, trash-eating men are doing just fine for themselves out in the woods.

Vrai is a queer author and pop culture blogger; they’re beginning to think those scheduling woes are contagious. You can read more essays and find out about their fiction at Fashionable Tinfoil Accessories, support their work via Patreon or PayPal, or remind them of the existence of Tweets.