Time Travel. What a nice thought at present. 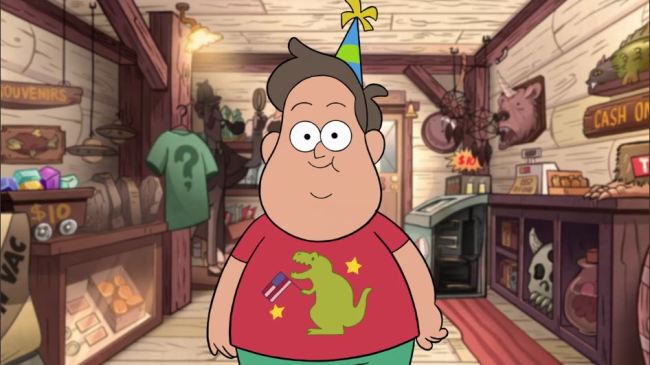 Dipper and Mabel try to throw a surprise party for Soos, not realizing that Soos hates his birthday for unknown reasons. Their attempts to cheer him up are interrupted when Blendin Blandin reappears, having challenged them to Globnar – it seems he was put in prison after the events of “Time Traveler’s Pig” and this is his one chance to get revenge and receive a paradox-free time wish.

While “Soos and the Real Girl” offered a Soos-centric episode only to fall short on the possibility, this episode delivers in spades. Despite the fact that Soos’ arc has to share time with time-travel shenanigans, it’s still a poignant piece about found families. It’s a savvy move that balances out the show’s central grounding in issues of blood family members (a perfectly valid type of story to explore, but one where the writers can often forget about the people who’ve gotten away from their relatives for good reason), offering a connection for kids who DON’T have a supportive relationship with biological family. Also, “Stan getting banned from flying in an effort to make Soos feel better” remains one of my alltime favorite background details. Stan is trying so hard to be a better dad than either he or Soos had.

It also has such a great denouement to Dipper’s crush that I wound up kind of disappointed that it was later somewhat revisited in “Roadside Attraction.” The use of the time travel mechanic to create a situation where Dipper has to not just intellectually understand but empathize with where Wendy’s coming from is fantastic, and the actual writing of that scene is just as understated as it needs to be to get its point across. It’s a fantastic character moment for Dipper, who cares about others but has always had trouble getting outside his own head and experience.

Centering this episode around, implicitly, the prospect of getting older (and foreshadowing the plot element of making the most of a disappointing birthday) gives the chance for the twins to really show how much they’re growing up. The recognition that they not only can’t but shouldn’t try to fix Soos’ family drama—because it’s not their place to decide what’s best for him—is a show of maturity that even a lot of adults fail to grasp. It’s good to want to help, but eventually that crosses over into just wanting the credit of being the one who fixed things to how YOU would want it rather than them.

I’m always so pleased by the Soos plotline that I wind up glossing over the Globnar stuff, which is a lot of fun. It’s not necessarily a mind blowing future, borrowing a lot of elements from Blade Runner, Tron, etc. as a means of visual shorthand or parody, but it really works for what’s going on here. The artists make their chosen elements really visually appealing with bright teals and pinks on black to contrast with the more natural colors of Gravity Falls, and the shorthand keeps the viewer from getting bogged down too much on a setting where we only really spend a few minutes. And, as always, Roiland knows exactly how annoying he can make his voice for comedic effect, and the writing knows it too. 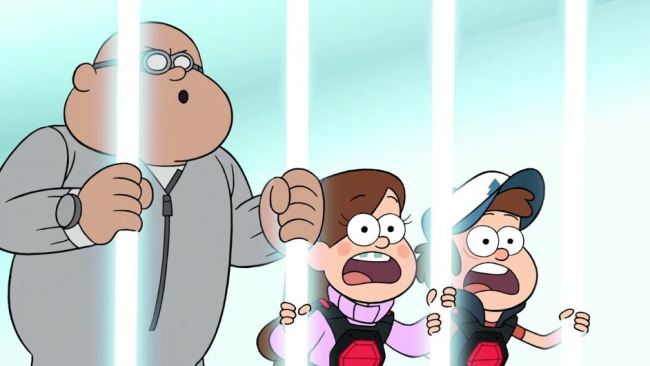 It’s about time we talked about Search for the Blindeye. Should we have talked about this last time? Probably. Was I determined to crowbar in talk of my pet crossover? Decidedly. So, here we are, because I’m not any good at discussing time paradox business and the show’s not really that interested in them either.

This was the first of a series of ARGs that the crew used during the airing of the show as a way of throwing a bone to the audience during the long hiatuses. It popped up in August of 2013, not long after the first season had finished airing. The Gravity Falls Wiki has a pretty detailed description of the timeline of the site, so I’m just going to hit the highlights.

While the site had a decent amount of extra content on the surface – ominous messages from Bill, that kind of thing – it was digging into the code that really got you places. The file names for the various images on the site often contained coded messages, which were implicitly from the Author (behold, though if you’re one of six people who still don’t know the Author’s identity, mind the spoilers). People spent WEEKS poring over those messages. Aside from the scribbled out fawning on Bill’s journal page, it was one of the only available clues as to HOW things had gone bad.

Though, not to forget about time travel altogether, you would not BELIEVE the number of theories that Bill was secretly another character, usually Dipper, who’d been somehow transformed by magic and had come back to the present for reasons, something something time loops. OR, alternately, that the generic brown-haired man visible in the background as Blendin is making his escape from prison was actually future-Dipper (in fairness to this one, the fandom had spent weeks being trained to look for Powers and Trigger in the background of shots). 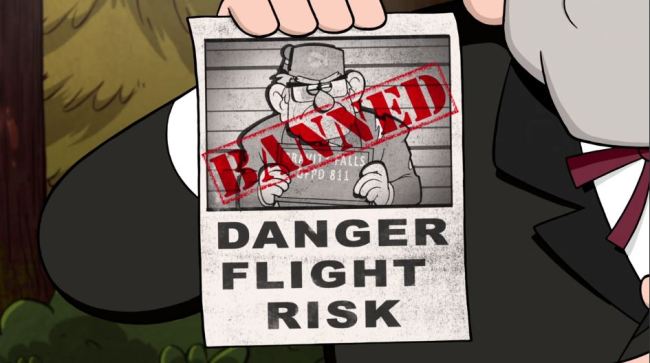 In addition to the usual stuff to look out for, we have the added element of Blendin’s jumpsuit. The various locations that flash by as he fiddles with the settings are all future episode locations – including the Northwest Mansion and the still much mysterious Glass Shard Beach.

By the way, you might’ve noticed the goat is there as far as ten years ago. This remains a semi-unanswered question in lore: on the one hand we know that a customer came to the shack, tried to pay with the goat, then left it behind. On the other, the infamous Bill Cipher AMA (which we’ll discuss in depth later) implies that there IS indeed something weird about its creepy eyes, saying “I LIKE HIM BETTER THAT WAY.” Yet again, the world may never know (well, there is a brief mention in Journal 3 that suggests the Hand Witch might’ve been involved, but that’s the best we’ve got). 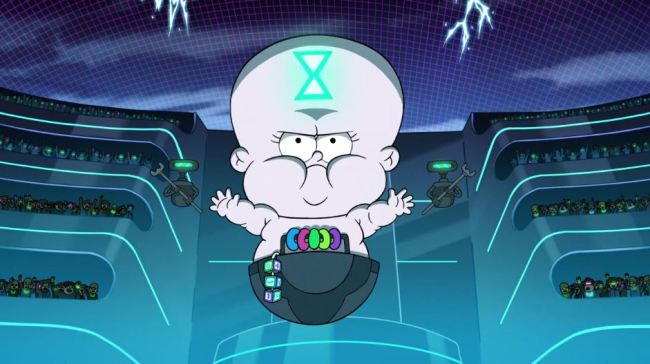 Surprisingly, given the nature of the episode’s setup, there’s not a lot of overarching plot stuff here. It’s still somewhat surprising that Time Baby didn’t play a larger role in the plot, but I wouldn’t necessarily call that a fault in the writing. Rather, having him set up as such an imposing, powerful figure really made for a crackerjack moment in establishing how powerful Bill had become as an antagonist by the finale.

And come to think of it… there IS a bit of a sneaky background timeloop thing going on here, isn’t there? Dipper and Mabel restore Blendin’s job, which means that Bill had access to all of time and space when he took over Blendin’s body (as to what deal he offered, yet another point of “the world may never know”). This means that he would’ve had the ability to go back and sabotage Ford’s project (which, as many have pointed out, winds up looking a LOT more busted than could be accounted for by Stan bumping into it), thus causing the initial schism that lead to the portal being built.

Vrai is a queer author and pop culture blogger; at last check they’re still here. You can read more essays and find out about their fiction at Fashionable Tinfoil Accessories, listen to them podcasting on Soundcloud, support their work via Patreon or PayPal, or remind them of the existence of Tweets.