The one with (not quite) all the answers. 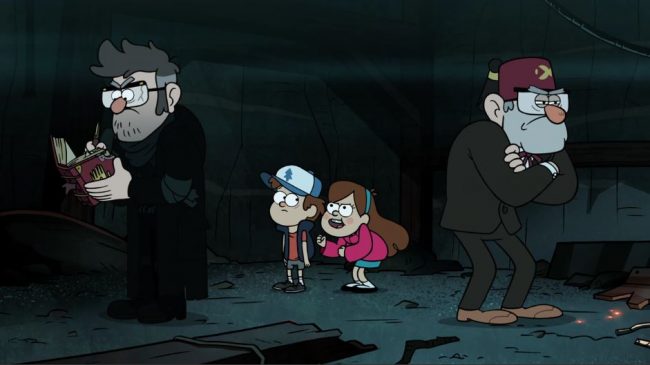 This episode was never ever ever going to live up to the expectations around it. Putting aside the people who’d pinpointed Ford’s existence for up to a year before the reveal, Disney also put a four month gap between the airing of “Not What He Seems” and “A Tale of Two Stans,” giving the fandom plenty of time to work itself into a frenzy with potential backstory. One episode would be tasked with telling the entire life stories of two characters, one of which it had to sell us on basically from scratch. And even at 28 minutes in length (almost an extra quarter longer than the average episode), that’s the most a single episode of the show has ever covered in terms of sheer plot details.

The episode that came out of that pressure is by no means a failure, but it stumbles a bit under the weight of what it needs to do. A few scenes play with the idea of an unreliable narrator, from Stan’s obvious glossing over of his hardships to Ford notably editing Bill out of the telling. This then casts aspersions over the rest of the two Stans’ respective stories, but the need for this episode to also Reveal the Truth keeps the script from going full bore in pitting the twins’ narratives against each other. There’s a tension in the fact that these are clearly edited narratives, and the fact that no one questions or corrects them (aside of the Bill issue), leaving them as a sort of defacto “truth.” And a few moments rely a little bit on narrative convenience, too–why did they call Stan to the office with Ford, exactly?

Some of the most interesting elements get left on the cutting room floor, whether it’s Ford’s time working with Fiddleford (which gets shoved out to Journal 3), Stan’s more adventurous criminal exploits, or even just digging into the psychological meat of the two Stans in their younger days. A lot of this falls under the show’s ethos that it’s more fun for some mysteries to be left unsolved, but in the episode that takes on the burden of Explaining the Things, it’s inevitable that it can’t be everything to everyone.

The high points are still astronomically high, particularly the final fight that pushed Ford through the portal. It’s not uncommon for creators in comedies to wind up playing characters just because nobody outdid the initial demos, but Hirsch does downright gutwrenching work as Stan here. And that’s no small feat next to J.K. Simmons, who gets a solid foot in the door while having to play a lot of emotional registers (young, old, happy, scared, paranoid) right off the bat. Ford’s design is a treat too, the dark color palette laying the groundwork for what a flawed character he is in spite of also serving as Dipper’s mentor. But we’ll be talking much more about that in the future. 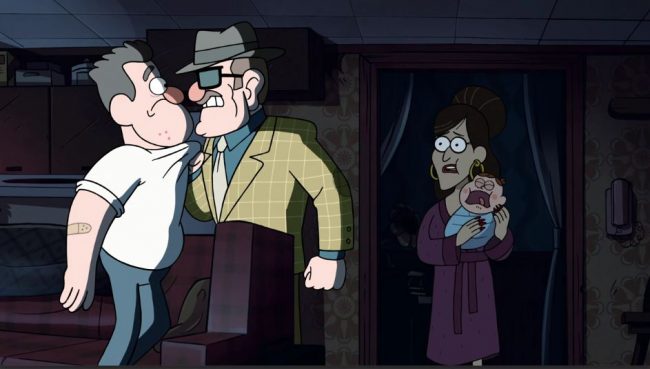 “Grunkle for Grandpa.” To this day those words send a shudder down my spine, leaving me able only to stare vaguely into the middle distance and wait for the flashbacks to pass. It holds the dubious distinction of being one of the only conspiracy theories in Gravity Falls fandom that refused to let go even on confirmation that it had been debunked, not quite to the point of the believers peddling loose change but close.

The theory went thusly: Stan(ley) is Mabel and Dipper’s great uncle. We never meet their great grandpa during the show (well, we do–he’s the baby who appears when Stanley gets kicked out as a teenager; the counterargument there is that the theoretical timeline doesn’t match up for two generations to have very young pregnancies, which of course was not at all common among baby boomers), and Stan was reportedly based on Hirsch’s grandfather. Given that Stan’s lied about his identity multiple times, then, it must be true that Stan is actually the twins’ biological grandfather.

There’s not anything actually wrong with this theory in abstract, but it’s always rubbed me the wrong way. Between its subtextual inference that Stan’s bond with the kids is somehow much more meaningful if he’s more directly related to them, to the fact that it tended to rope in a last-ditch effort to make Carla McCorkle an important character who really WAS brainwashed into dumping Stan because what is close reading, to the insistence that Hirsch was for some reason lying about saying the theory was not true after he did.

It had far more fervent supporters than anything besides the Twin Theory, and perhaps running on inflated confidence after that one turned out to be right, the whole thing got downright shrill. Not that I won’t agree that Shermy as a whole character is the most throwaway plot hole bandaid in the entire show, but choosing this as a hill to die on always frankly baffled me. 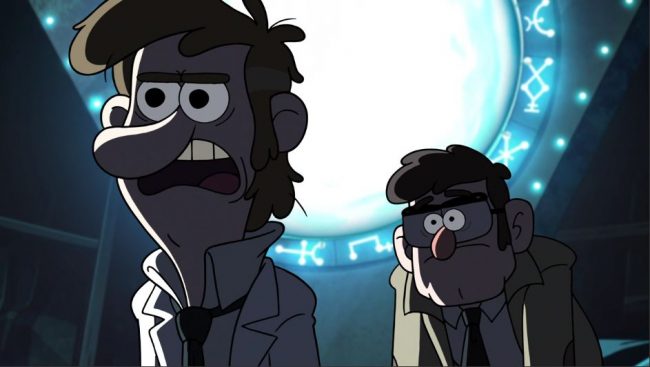 PAGE CIPHER: A Stubborn Tough New Jersey Native, Filbrick Wasn’t Too Creative. Having Twins Was Not His Plan, So He Just Shrugged And Named Both Stan

This episode is full to the gills with callbacks, including the revelation that the backwards message from Fiddleford’s forgotten memories (“Bill Cipher Triangle”) was apparently something he picked up while looking through the portal.

One can also see the message “Blendin was here” written on the boards at Glass Shard Beach, which is a huge piece of foreshadowing for the show’s finale (and led to the theory that Stan wasn’t, in fact, the one who completely broke Ford’s perpetual motion machine).

And finally, there’s a mezuzah hung near the doorpost of the Pines’ New Jersey home, confirming the popular headcanon that our main characters are Jewish. 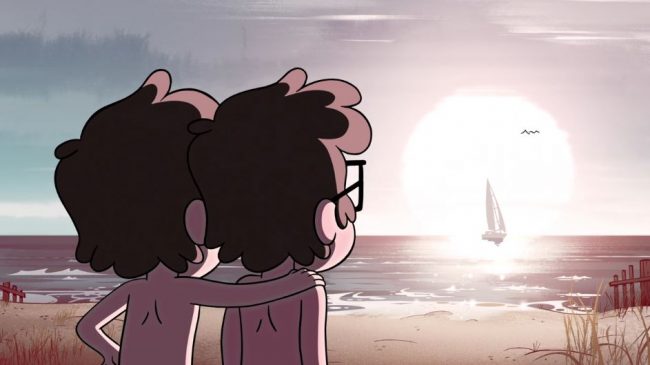 You could fill books with the amount of meta written about the Stans in this episode, usually to the tune of which one of them was The Worst and which was a sweet, blameless angel. This is a depressingly simplistic way of looking at it, since the rift between the Stans had as much to do with extenuating factors on both sides and both being dumb kids as anything else. Also, the fact that Filbrick Pines is the worst and the root cause of the majority of toxic masculinity Stan’s been carrying around all his life (both Stans, probably, but we’ve had more time to see it in Stanley).

There’s a lot of adult content in this episode that’s just sort of left to the side. Not adult in the way that terrible CGI kids’ films try to keep parents entertained, but just factors of adult life that the show drops in for flavor but doesn’t explain. Stan, for example, accuses Ford of “hoarding” his grant money rather than helping Stan or their parents, but that’s not how grant money works (Ford’s expenditures would’ve been real closely monitored to make sure they didn’t get abused in just such a way). But of course, Stan couldn’t be expected to know that as a high school dropout, and it makes sense that if he (albeit incorrectly) thought that Ford just refused to help him despite being able, then that would contribute to his resentment. Little touches like that are part of what make the show so rich to revisit.

Also, speaking of dropping out of formal education, Stan started a successful business AND got the portal running on his own despite not having any kind of degree. A moment of slow clap is more than called for on that one.