There’s Something Very Wrong With This Picture of GOP Lawmakers, but I Can’t Quite Put My Finger on It

Hmm, what could it be? 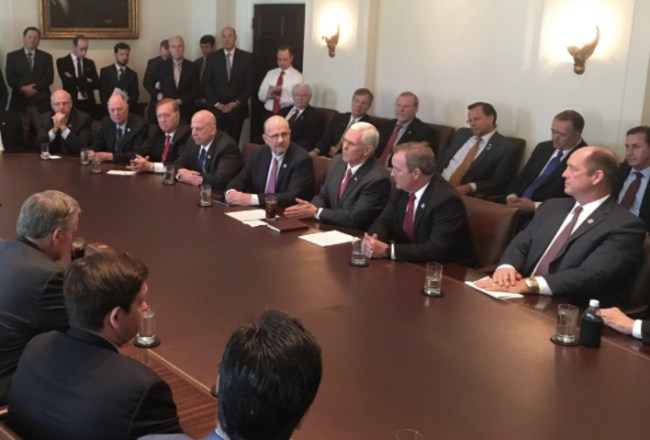 On Thursday afternoon, Vice President Mike “I always look like I’m about to introduce legislation to outlaw the X-Men” Pence tweeted a picture of the far right conservative House Freedom Caucus meeting with President Trump. They were trying to hash out a deal in the mad scramble to approve the universally abhorred Trumpcare bill—but the picture set the Internet on fire.

Appreciated joining @POTUS for meeting with the Freedom Caucus again today. This is it. #PassTheBill pic.twitter.com/XG6lQIy5a6

What, exactly, is so wrong here? Well, Trump was pandering to the Freedom Caucus, whom he needs on his side if Trumpcare has any hope of passing. The Freedom Caucusers aren’t upset with the bill for revoking insurance from millions—no, no, they want it to be more harsh, and strip away benefits that would otherwise remain. The government has no right to meddle with people’s bodies, they claim, except of course if those bodies are female.

And there’s the rub. As CNN explains,

The photo featured no women, even though lawmakers were discussing Republicans’ health reform proposal—and members of the House Freedom Caucus want to strip a requirement that health insurance plans cover essential benefits, including coverage for maternity services.

Yup. So a room full of wealthy, primarily white men gathered together to scheme about taking away maternity care and  other basic essentials from those who need it most. The rank hypocrisy in this room must have challenged the overwhelming stench of Drakkar Noir for supremacy. Not only would the Republicans’ American Health Care Act make it extremely difficult to have insurance cover an abortion, but the “Freedom” Caucus wants it to remove support for mothers and babies. How do these people sleep at night?

Compounding the whole mess was Senator Pat Roberts of Kansas, a man who was never taught to think before speaking. When he was asked about the removal of health benefits to women, he snarked to a Politico reporter, “I wouldn’t want to lose my mammograms.”

Roberts was widely criticized for his “joke” and later apologized, but not before social media roasted him and several made the point that mammograms aren’t limited to, you know, female problems. As the great science fiction author John Scalzi pointed out:

There are male breast cancer survivors in my family. Yes, men can get breast cancer. This asshole isn’t funny. https://t.co/veOtgc6hoW

Here’s the thing about these social media kerfluffles: they demonstrate the total ignorance and complete apathy of Republican lawmakers and authorities towards women, minorities and the less fortunate. I know what you’re thinking—this is hardly news. But while many of us imagine them plotting away James Bond villain-style, I think it’s even more terrifying to realize that they litertally do not care and it never occurs to them that the things they say and the company they keep has meaning.

Sen. Pat Roberts does not care if people die of breast cancer if it is politically expedient to his ends. It would never occur to VP Mike “I make the monster under your bed seem approachable” Pence and his social media team that for the VP to tweet out a picture of only men making decisions about women’s health might be a misstep. In their world, they only care about themselves and their perceived successes.

As the talking heads on TV keep saying as I type this, “They want to win regardless of what’s in the bill.” Americans are going to suffer and die, but at least these guys might score. That’s their only priority. They do not care about you, and they never will.