No Need to Turn off the Annoying Google Homepage Background: Google Just Did it For You.

It looks like Google has listened to the thousands of complaints about the automatic, difficult-to-turn-off background on their front page: Google has just turned it off for you.

While the promotion was meant to just go on for today, Google’s VP for Search Products & User Experience, Marissa Mayer — who announced today’s 24-hour promotion on Google’s blog — just Tweeted out that the background change has been rolled back. If you go to Google.com, you will see that it has been done.

Meyer announced the change in a response to one dissatisfied customer: “Actually as of now :) @Jon_E Google search background back to normal tomorrow, says @marissamayer.” 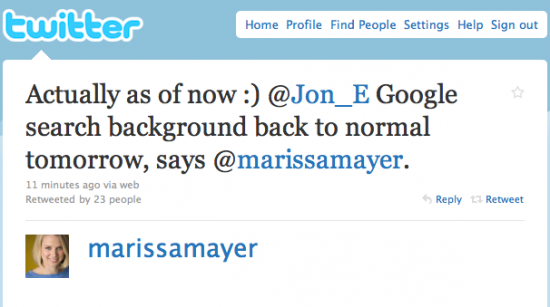 While Google can’t be happy that this promotion turned out to be a flop, you’ve got to give them some credit for responding to customer complaints relatively promptly and not sticking too rigidly to a disliked plan.

If you’re one of that handful who actually like the Google homepage background, check out our instructions for how to turn it on and customize it.