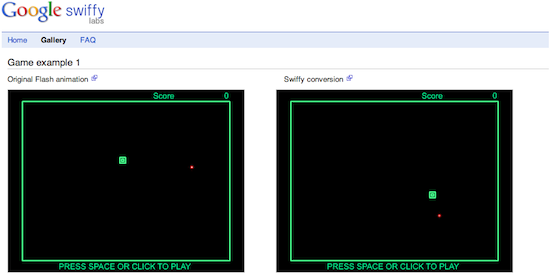 Overshadowed by yesterday’s announcement of Google’s next attempt at a social network, Google+, was another, albeit smaller, tool released by Google: Swiffy. The handy tool converts Flash files to HTML5 so users can run Flash files on devices that do not support Flash, or on devices on which users do not allow Flash’s tendrils to reach. Considering this is an early version of the tool, Swiffy doesn’t convert all Flash animations, but according to the press release, it works great on ads and animations.

The converted HTML5 files run on web browsers with high SVG support, such as Chrome and Safari, and Swiffy uses a compact JSON representation of an animation, which is rendered using a combination of HTML5, CSS3, and some Actionscript 2.0, which is interpreted in JavaScript in the browser. The method supposedly makes the conversions nearly as compact as the original SWF files. Google provides a few examples of the conversion over here, and one can give Swiffy a go over at its Google Labs page.