They may look ridiculous, but they're getting paid to lose weight and look at pretty views. 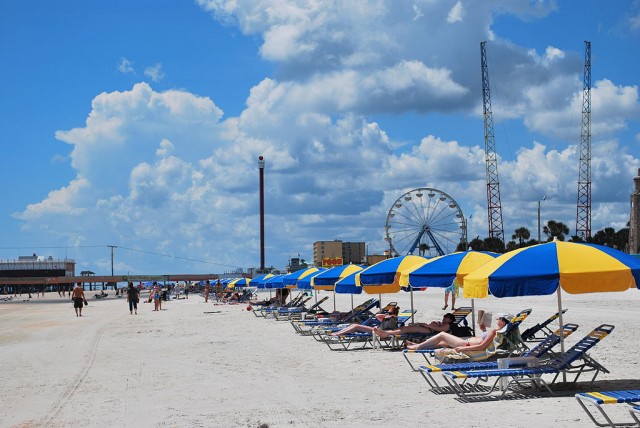 Gregg Matthews and Chris Officer are walking on the Florida beaches, in hiking boots, with camera orbs strapped to their backs as a job. The Florida tourism agency is paying them and one other team to gather images that will be compiled into panoramas and then sold to Google Maps– all 825 miles of it.

Since starting back in late July, the pair literally walk along the beaches, trading the camera orb back and forth as its 15 cameras take pictures every 2.5 seconds to create the world’s first massive beach mapping project a la Google Streetview. The project is intended to boost tourism, Florida’s top industry which brought over 90 million people and 70 billion dollars in to the state last year).

While bringing more people to Florida might be the idea footing the bill, Matthews said that he most enjoyed the desolate, unpopulated areas best. He also relishes the chance to bring the beach to all the people who might never get to visit, but can now appreciate the coastline for themselves– and even some of the barrier islands that are only accessible via boat.

The mappers are paid $27 per mile, and Matthews adds that in the three weeks since the project started he has already lost 15 pounds. The pair are nearly done with the Panhandle region, and will then complete another hundred miles. After they wrap there, a second team will take over somewhere between the Atlantic Coast and South Beach, and hopefully finish the entire project in November.

(via Miami Herald, image via Wikimedia)