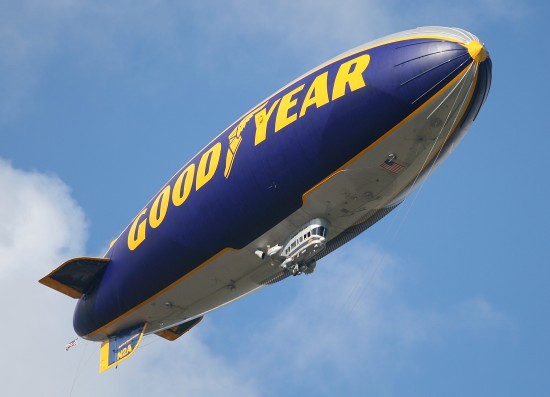 Airship enthusiasts are invited to strap on the goggles and billowing white aviator scarves for the announcement that Goodyear is retiring its current fleet of blimps and replacing them with new airships. The new craft will be built by Zeppelin Neue Technologie (NT), the modern successor to the famous Zeppelin company that brought us rigid airships of massive size and is partly responsible for the phrase, “oh, the humanity!”

Goodyear’s current fleet consists entirely of blimps, those being airships without a rigid internal structure. Blimps are all well and good, but the design limits the attachment of external engines and the overall size of the craft.  The new Zeppelin NT airships are classified as “semi-rigid,” having a limited triangular skeleton of carbon-reinforced plastic and aluminum struts. With engines mounted at the rear of the craft, rather than the control cabin, the new Goodyear Zeppelins should have a quieter, smoother ride, which is better for photography. Goodyear will, of course, continue to use non-flammable helium in the new Zeppelins.

With Goodyear planning on flying their new Luftschiff Zeppelin (LZ) N07-101 craft in 2014, Zeppelin NT will see the number of their craft flying worldwide double. The deal between the two companies is also something of a historic return to form, as Goodyear worked closely with the original Zeppelin company to build airships in the U.S. some 70 years ago. So if you see a Goodyear airship after 2014, remember to politely, but firmly, remind your friends that it’s not a “blimp.” They’ll thank you, I’m sure.

(The Register via Airships.net, image via Wikipedia)