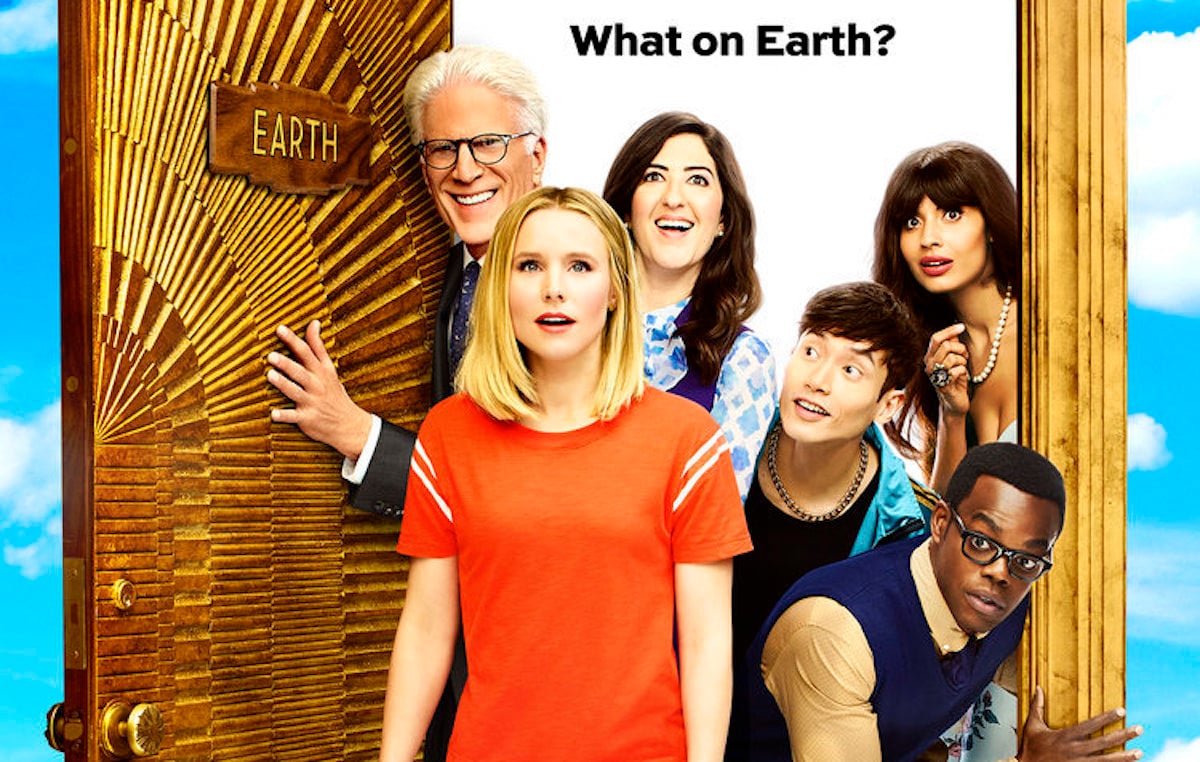 Last summer, at San Diego Comic-Con, I stood in line for about two hours for a packed panel at the Indigo Ballroom. No, it wasn’t for a superhero show or a new movie. It was for the smartest and weirdest comedy on television: The Good Place.

The first two seasons of Mike Schur’s wacky take on the afterlife were smart, challenging, wildly inventive, delightfully absurd and astonishingly heartfelt all at once. Not only did this show deliver emotional beats and incredible surprises while making jokes about wind-chime genitalia and getting ladled onto the surface of a sun, but it made you think about your own morality and place in the universe. That’s rare in even the biggest prestige hits but for a half-hour comedy? It’s amazing.

This quality means that going into a third season, where the characters have literally been to hell and back, the bar is extremely high. I’m happy to report that The Good Place season three doesn’t just raise that bur, it turns that bar into a novelty pencil to skewer some emu with. (There are emu in Australia, right?)

Before we go further, a spoiler warning for seasons one and two. If you haven’t watched seasons one or two of The Good Place, don’t read this! Seriously. The surprises and twists are best experienced in a boundless void of innocence. All twenty-six episodes are on Netflix right now, so you have no excuse. Oh, and spoiling the show for others is a major point-loosing offense, so I need to cover my bases here. Good? Great. Let’s get on with things.

From the get-go, when Eleanor Shellstrop (Kristen Bell) opened her eyes in the afterlife, The Good Place has asked questions, sometimes without us even knowing they were being asked until the last minute. The first season asked, “Where is the gang?” and the shocking answer was the bad place.

The second season delved more into “Who is the team?” and we watched as the humans—Arizona “trashbag” Eleanor, narcissistic beauty Tahani Al-Jamil, perpetually indecisive Chidi (William Jackson Harper), and literally the least intelligent amateur DJ on the planet, Jason (Manny Jacinto)—along with demon architect Michael (Ted Danson), and not-a-girl-not-a-robot Janet (D’Arcy Carden), grew morally and emotionally, enough so that the Judge of the Universe (Maya Rudolf) allowed for a reset of the timeline to prevent the four humans’ deaths to see if they could become good people.

The third season channels Drax the Destroyer by asking, “Why is the team?” as in, why did they grow ethically before, and what are morals in the first place? 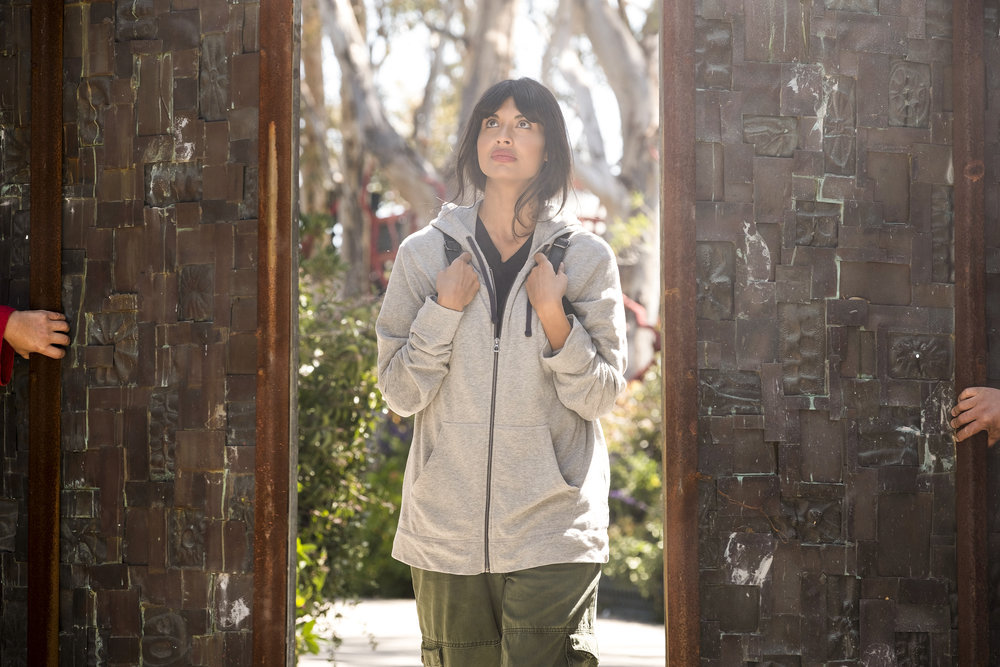 In previous seasons, “team cockroach” learned about all sorts of moral philosophies (and why people hate moral philosophers) in a literal vacuum. They were alone in a monstrous, manufactured reality with unlimited resources, but no other disciplines chiming in. In this season they’re not alone, and they’re in an actual monstrous reality: Australia.

And in a brilliant move, the series has introduced other arenas of study to their examination of humanity in the character of Simone (Kirby Howell-Baptiste), a neuroscientist who works at the same university as Chidi. Simone helps Chibi with his chronic indecisiveness by giving him an actual look at his brain, then later becomes instrumental as the gang converges on the university for a study of their brains and morality.

I love Simone. She’s funny and brilliant, and her scientific background brings something new and awesome to the show. Whereas Chidi could break down moral conundrums from a philosophical point of view, Simone can talk about them in terms of evolution and science, asking Eleanor et al. to look at their actions in some of the most primal terms.

The brain science is one thing to explore, but another answer to the Big Question of why and how people grow morally is something we already know: our connections to each other. Of course, when the four humans originally died, they didn’t know each other, so how are they to grow morally when they’re all apart? That’s the focus of much of the first episode

We saw Eleanor’s year-long journey at the end of last season, so now we get to catch up with Chidi, Tahani, and Jason as they succeed and fail at growth over the course of the year after their near-death experiences. Of all these stories, Jason’s is the funniest, and plays brilliantly into Manny Jacinto’s talents as a lovable ding-dong, and even a dancer. 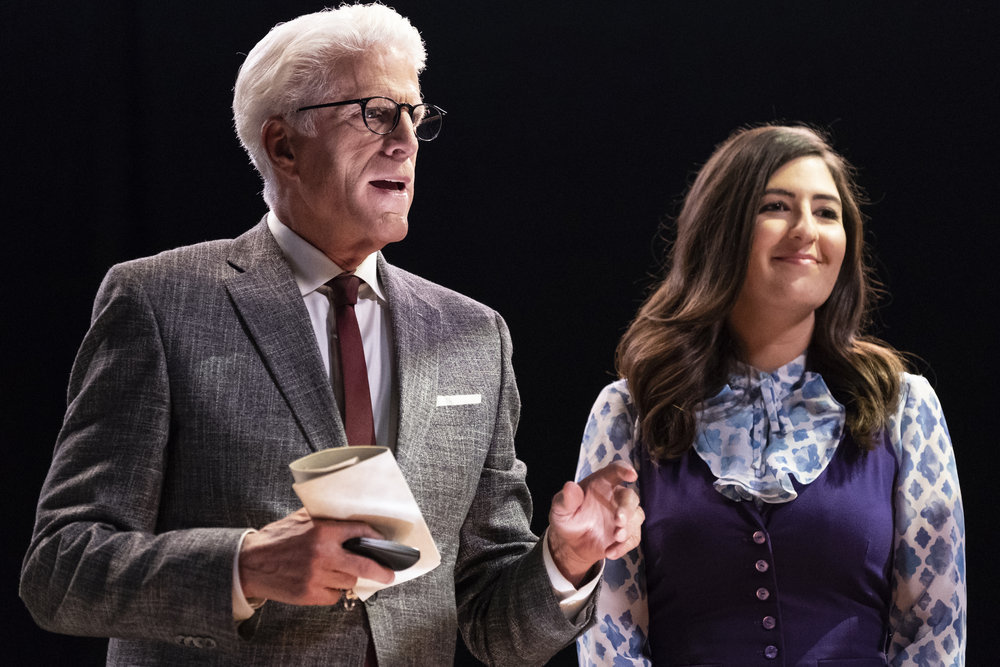 We’re watching, and rooting for them, along with Michael and Janet, who have been told not to interfere … but as we know, Michael’s not great with rules. Their attempts to nudge the humans to come together, and then keep them together, is the major driver of the action for the first few episodes. It’s not easy, as they run up against interference both demonic and mundane.

We see the return of some other familiar faces, along with a former beau of Tahini’s. The results are, of course, hilarious. We get some great emotional beats from Danson and Carden, who get to do some new and very entertaining things as they try to play with human lives and must play human themselves. After Danson’s exceptional work in season two, it’s somewhat odd to see him going back to more of a one-note performance now that Michael seems to be firmly on the human’s side, and in some places, he’s even a bit too cartoonish.

However, this show likes to turn everything upside down every few episodes, and season three looks to be no exception, so my hope is we’ll get something more complex from Michael down the line.

Now that we’re on earth, the very look of the show is different—less saturated colors and fewer sight-gags. Even so, there’s some great visual humor, especially in episode two, which involves a restaurant visit that had me in stitches. As a brief aside, I’m noticing so many of these details because I spent most of my summer enjoying the wonderful, official Good Place Podcast, hosted by Marc Evan Jackson (who plays the demon Shawn).

Each podcast episode tackles one episode from the series with guests that include not only writers, actors and directors, but prop masters, editors, special effects coordinators and more. It’s a fun and very interesting look at how television is made, and I recommend it highly. Take a look at a video clip straight out of the latest episode, in which Jameela Jamil and writer Jen Statsky discuss the origins of the idea for the show to head to Earth:

Even though we’re on earth, The Good Place maintains its delicate balance of whimsy and absurdity with real questions about morality and mortality. There’s more surprises, more feeling, more shrimp and everything else we loved in the last two seasons, but there’s also new challenges and perspectives. So, as you go into season three, don’t worry. Everything is more than fine.

Season three of The Good Place premieres Thursday, September 27 at 8/7 central on NBC.