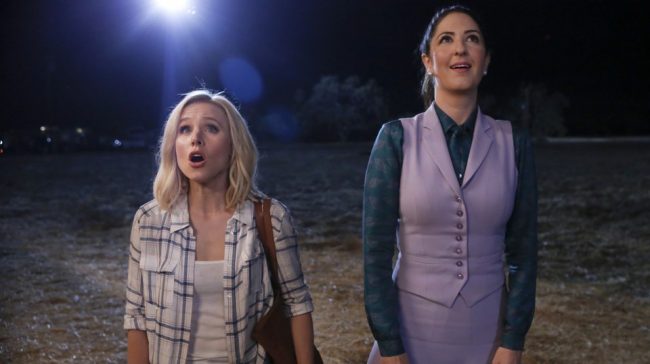 Coming into season two of The Good Place, the big question was how the show would move forward after exploding their entire premise in the first season finale.

Before we go any further, be warned that there are spoilers galore ahead, for season one as well as the first episode of season two, as well as lots of speculation on what’s to come. If you’re not caught up, turn back now and come back once you’re up to speed.

At the end of season one, we learn that the Good Place is actually the Bad Place, designed for the codependent torture of only four people. Whatever direction season two decided to take, it was going to be very different from season one. And as we saw with this week’s premiere, that’s very true, and completely fine.

More than any other character, season one was Eleanor’s show. We knew her secrets and her goals: that she doesn’t belong and wants to stay in the Good Place, and maybe also become a better person in the process. This season, it’s not yet clear who our main protagonist will be. The first episode was split between our four deceased characters, but the central focus seemed to be on Michael. Now we’re in on his secrets, both those being kept from the gang, as well as from his boss.

By the end of the second season premiere, we were already on Michael’s third pass with the construct of his “Good Place.” How many times will he have to reset? What are we rooting for, exactly? It’s not like Eleanor & co. can level out of the Bad Place. Unless they can. We don’t know! The possibilities and mysteries of this season are so exciting, and we have no idea where this ride will go.

As we look ahead, though, there’s one element from the season premiere that stuck with me. Having just done a season one rewatch, I was struck by how different Eleanor felt in this episode than in the pilot. This could just be wild speculation, but this show lends itself to that; it’s part of its fun.

(Me watching The Good Place)

The biggest indicator that something is different about Eleanor is her behavior at the welcome party. As the torture demons try to get her drunk, even Michael notes how out of character her sobriety is. (“She brought a flask to her driver’s test!”) Sure, this can be explained by her need to find Chidi, a circumstance that wasn’t there the first time around—and it doesn’t take long for her to (almost) give in to tequila shots—but this level of responsibility would not have been typical for living Eleanor.

There are other moments that seem to fit the Eleanor of the end of last season far more than her first day in the Good Place. They’re tiny things, like apologizing when she bumps into Jason in the street. That might not seem like much, but it’s worlds apart from this woman:

There’s a relative softness to this new Eleanor that could be dismissed as an acting or directing choice, but on rewatch of season one, you notice Ted Danson give nearly imperceptible reactions–just the tiniest flinches–when things aren’t going according to his plan. This show is committed to details, and if there are any changes at all in a character’s demeanor, I trust they’re deliberate.

All of this is to say, I believe that the growth Eleanor experienced last season has stuck with her on some unconscious, cellular level. And if that’s true, the possibilities for that unknowing evolution are really exciting.

And while we’re talking about awesome female characters who may hold all the answers of the show, let’s talk about Janet!

Janet had a huge moment in the first episode, though I didn’t notice its significance until my second watch. When Janet runs into Jason, he tells her how isolated he feels.

She responds, “What you’re saying is there are certain aspects of your existence here in the Good Place that are confusing for you? And you’re searching for someplace to go where you feel less lonely. I know someplace you can go.”

And then next time we see them, they’re walking into Eleanor’s house, so Jason can speak with her. “Privately. About something.”

And that’s all that’s said about that! Why did she bring Jason to Eleanor to make him feel less lonely? What does she expect him to talk about? The mere fact that she expected him to speak to anyone betrays his whole Good Place identity. THIS IS BIG.

Clearly, Janet doesn’t need notes in her mouth. She doesn’t reference her “marriage” to Jason, but she knows something about the history of the group. I’m calling it here and now, Janet is the key and the savior to this whole thing.