Now that Voyager I Is An Interstellar Ship, Let’s All Listen to the Golden Record

No, we're never going to stop talking about this. It's the coolest thing ever. 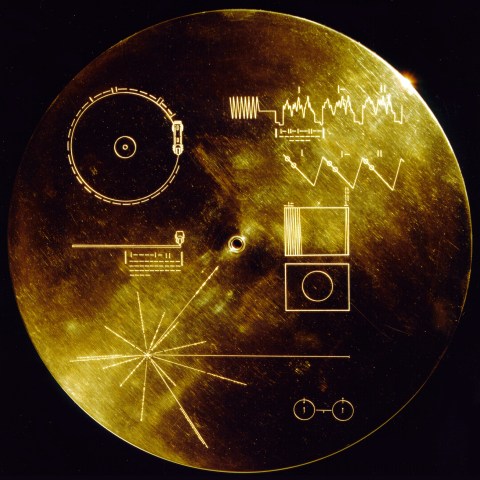 Back when Voyager I was first launched into space, a committee lead by Carl Sagan put together a series of messages for any intelligent life outside our solar system who might come across the ship. Etched on gold-colored copper plates, this series of images and audio greetings is meant to reflect the whole of humanity — and now it’s totally in interstellar space.

There are a lot of ways you can listen to the music that’s contained within the golden discs. First, there’s a simple archive of .wav and .mp3 files on the NASA Voyager archive page. You can stream from there, or you can even download the files and take them around with you on your MP3 player and constantly pretend you’re an alien trying to navigate our way of life. We imagine that would make getting stuck on public transportation so much more fascinating.

If you’ve got a pretty decent internet connection and you also want to stream the record in the coolest way possible, there’s this interactive Golden Record website. While there’s no instructions (the aliens don’t get any, either), you can figure out your way around by clicking on the different parts of the flash menu. If you can’t, here’s a quick tip: top left is the music; top right is the images that were also included; bottom right is the space map that shows Earth’s location in the galaxy.

But what’s on the record? Like, a whole bunch of awesome stuff, including greetings from 55 different languages, a movement from one of the Brandenburg Concertos by Bach, a Senegalese percussion ensemble, whale sounds, a Peruvian pipe band (yes, they are basically inescapable), and Johnny B. Goode by Chuck Berry. It makes for basically the coolest playlist ever — and a perfect soundtrack to your day today if you’re as excited about the Voyager I’s new interstellar status as we are.

(Via How Stuff works, NASA, and GoldenRecord.org)