This picture isn't from the comic book, but boy we sure wish it was. 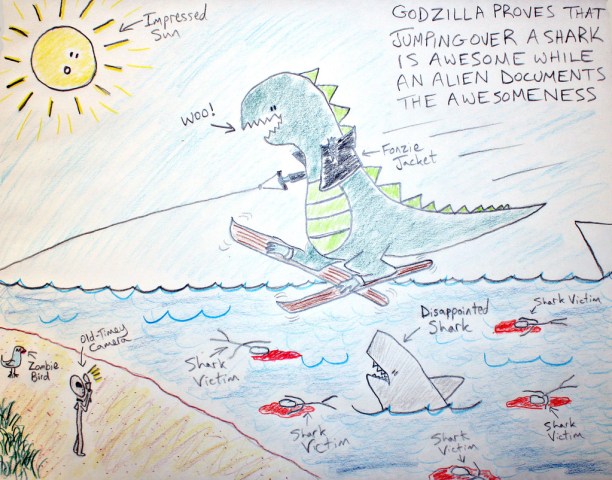 We’re looking forward to the Godzilla remake and can’t wait until May 16th to see it, but we won’t have to — sort of. Impatient fans can get an early look at the new King of Monsters in a prequel graphic novel from Legendary’s comics division. The book was co-written by the film’s screenwriter Max Borenstein.

The prequel will be a 72-page story that’s set a few decades before the film. It’ll be nice to see what Godzilla’s been up to since the last movie. Max Borenstein co-wrote the book with Greg Borenstein, and we’re unclear if they’re related or if it’s just a coincidence. The book is titled Godzilla: Awakening and tells the story of how creatures like Godzilla were awoken at the dawn of the atomic age.

The fantastic art above isn’t by any of those artists, and is unrelated to Godzilla: Awakening. It was done by Jason Sweeney, who is clearly an artistic genius in his own right, and now we want a comic book about the King of Monsters Fonzie-jumping sharks.

Until the book comes out, here’s a video of the movie’s director Gareth Edwards being pretty excited about the comic:

(via Legendary, image via Jason Sweeney)