i try to be generous about some of the nonsense media orgs pull but i will never, ever forgive mass digital byline destruction.

[UPDATE 11/3 3:00 pm: All the sites mentioned below are now back online, with a link to Ricketts’ message pinned to the top. From the look of it, the sites will not be publishing new content, but the work will be up in a read-only form. Joe Ricketts is still a garbage human and a waste of space.]

Yesterday, local-focus websites DNAinfo and Gothamist, as well as the other -ist sites across the country–LAist, SFist, Chicagoist, and DCist–shut down. In this era of pivots to video and slashed journalism budgets, that’s not unusual. The way in which it happened, though, very much is.

Last week, the writers at DNAinfo and Gothamist, but not the sister sites, voted to unionize. On Thursday, billionaire owner Joe Ricketts fired every employee–all 115 of them across the country. What makes his act truly despicable is that he didn’t just close the sites; he wiped their existence from the internet. Now, all links to the sites and any articles published on them redirects to this message: 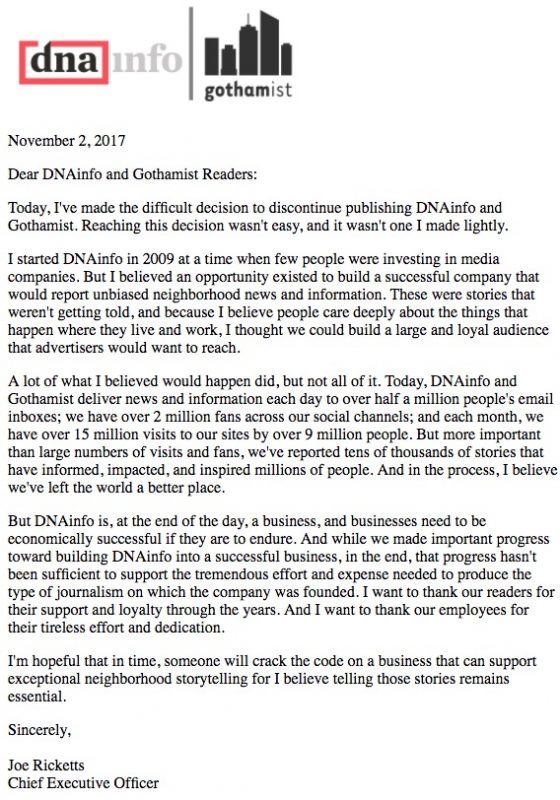 Many of the writers on those staffs had been with their site for years. Their entire careers and all work samples they would have used to get new jobs are now gone. Ricketts didn’t even give them time to gather their work. The shuttering was a total surprise with zero notice. (There are some beautiful people working to help the writers get PDFs of cached articles.)

Who would do something like this? Joe Ricketts would. A little background on Ricketts: He’s a scummy billionaire monster of a human. He and his four kids own the Chicago Cubs. He spent $10 million on attack ads against President Obama in 2010 and donated millions to Trump’s campaign. When he bought the -ists earlier this year (he founded DNAinfo, but had only owned the sites since this spring), past articles with negative coverage of him were scrubbed from the sites.

While Ricketts is terrible, the sites he owned were the opposite. They focused on uniquely local news and employed stellar journalists. (Our own truly stellar Jessica Lachenal left to take a job at SFist just a few months ago.) I’ve visited LAist and Gothamist nearly every day for years. They told important stories with intelligence and humor. Sure, Ricketts wasn’t running a charity, and local news is notoriously hard to make profitable. Though many insiders are saying that Gothamist was profitable, it was Rickett’s original creation DNAinfo that lost money. Either way, the way in which these sites were shuttered and their employees spitefully wiped of the records of their careers just days after voting to unionize is not normal business practice. It was cruel, callous, malicious greed.