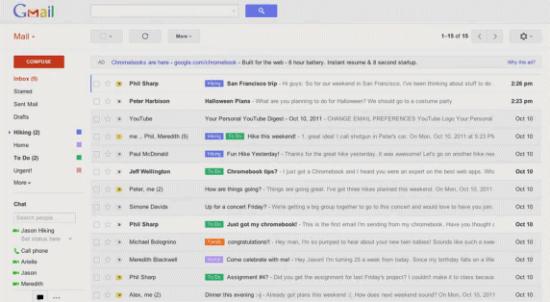 Gmail has been a stalwart companion and workhorse for over seven years, but in that time it has remained mostly the same. However, a recent video posted to the official Gmail YouTube channel heralds the arrival of a new look for the web-based email service, and new functionality to boot.

Though the slick new look of Gmail, pictured above, has been available as a theme for some time, the video announces that this will now become the default theme. Though there will be numerous redesigned HD themes available, this is now the default look of Gmail that other themes will be built on. More than appearance, the video unveils different levels of “density” for the mail service with each displaying more or less information as the user desires. The left sidebar is now resizable, making life easier for people that use chat more than labels and vice versa. Also, Gmail will now automagically resize itself depending on how large the user makes the browser window. Perhaps the most interesting change is the updated search box which — similar to the Chrome browser — is the new centerpiece of Gmail, with advanced search options and the ability to create filters directly from the search box.

Strangely, the video has been made private since it was originally spotted earlier this week, suggesting that it was accidentally made public in the first place. However, someone was able to nab it, and you can view it below.