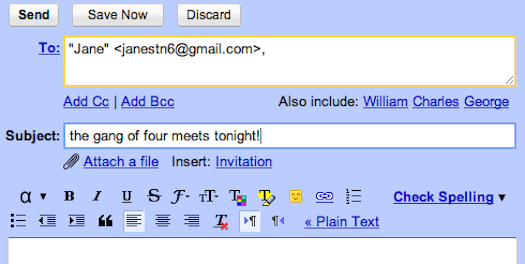 Gmail’s forgotten attachment detector is a wonderful thing, and in that vein — helpfully analyzing the context of an email using the data centersful of information without being too pushy — Google is rolling out two new features to Gmail which previously existed only in Google Labs. Called “Don’t forget Bob” and “Got the Wrong Bob?”, respectively, they both analyze a user’s email history and scan the current recipients of the message in draft.

The first of the two makes suggestions as to who to include “based on the groups of people you email most often”: Clicking on those suggested names automatically adds them to the recipients list. The second has the potential to avert even more awkwardness: If Gmail ‘thinks’ you are accidentally including the wrong person as the recipient of a message in the place of someone else with a similar name, it gives you a clickable suggestion to replace the “wrong Bob.”

Both of these features will roll out over the next few days across all Gmail accounts.