Interview: Sébastien Laudenbach and The Girl Without Hands | The Mary Sue

Interview: Sébastien Laudenbach Improvised the Entirety of The Girl Without Hands and Created an Animated Masterpiece 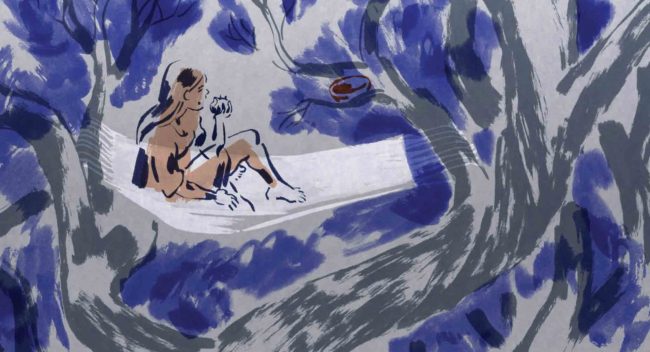 The Girl Without Hands (La Jeune Fille sans mains) is a French animated movie that comes to life in front of you, highly expressive with minimal strokes. This adaptation of a Grimm fairy tale is told almost single handedly by director Sébastien Laudenbach, who animated the film and improved much of it along the way. You can read my review of the film here.

While it’s incredibly impressive when animated films achieve a hyper-realistic look or meticulously plan a story from beginning to end, Girl Without Hand is a gorgeous tale that captures the spirit of a fairy tale. It many ways, it’s the visual equivalent of having a story told to you in person, with your mind sketching out particular details and puzzling over magical elements. Laudenbach is not only a lovely story, it’s told in a refreshingly different way that will enthrall and fascinate.

I had a chance to talk to Laudenback over email about why he chose this particular story to adapt, and the joy he found in being so creatively free with the process.

The Mary Sue (Charline): What was it about this particular fairy tale that appealed to you?

Sébastien Laudenbach: When I read it, I immediately found it modern. I liked the path of the girl, who has to leave a men’s world; her father first, then her prince. She has to be alone. Growing up, she needs time to be herself; to be entirely whole. And when she is ready, she can then come back to the world. This is very important for me. I think that it was the first time I read a fairytale which tells such a kind of story; a fairytale where being a princess is not the end, a tale which shows that it is better to be a woman than a princess!

It seemed universal to me. And it made me think about some parts of my youth. This is a story of a woman, but also the story of a man, the prince, who has to go away, to fight in far wars and come back. Also for him, it is better to be a man than a prince! And this man is not a superman, he is not a superhero. He is a man with his weakness. But as a simple man, he can be loved.

TMS: In the U.S. at least, there seems to be a tendency to make fairy tales less mature and for animation be to somewhat childish, but Girl Without Hands doesn’t do that. Can you talk a bit about the vividness of the film?

Laudenbach: I think there is a strong relationship between tales and animation. Because in both there is a distance from the reality. Both take the essence of life and creates poetry. Both are for everyone; age doesn’t matter. In France, we recommended the film for an 8 year old audience. When I made the movie, I didn’t think about a specific target audience demo. The tale is cruel and this violence is important. If you cancel it, you cancel the strength of the story!

This physical violence, in the story, is the metaphor of psychological violence. I wanted to affirm this cruelty. But in the same breath, I wanted to tell it with beautiful shapes and colors. The graphic design is soft. The story is rough. It creates a dynamic movement that interests me.

TMS: I read that the animation of the film was your work, and improvised in many ways. Can you tell me more about that process, and what you think that style gives the story?

Laudenbach: There was a previous version of the project. The story was the same, but the design was completely different as well as the mise en scene. But, we didn’t reach the financial amount. Additionally, the project was abandoned in 2008. Fast forward to 2012. My wife got the opportunity to go to the famous french artistic residency at the Villa Medici in Rome. Because of that, we moved to Rome for one year and it was the first time in my life I was able to do everything and anything I wanted to… creatively. So, I decided to make this feature! Problem was I had no producer, no money, no studio. I was totally alone.

So, I didn’t use the script or the storyboard I made for the previous version. Actually, I improvised the film from the beginning to the end, following the canvas of the fairytale, as a jazzman. I was able to draw 3 or 4 shots a day so it was quite fast. I was totally emerged into the story; so much I could feel my character’s emotions. It was amazing!! And most of the time, the movie was stronger than me and guided me in the right way. Doing it like that, everything was always open: story, rhythm, colors, movements, and so on… To add, I was able to use all the palettes, animation and drawing technique could provide. I felt so free!

TMS: Did you have any artistic influences when you were making Girl Without Hands?

Laudenbach: The most important influence was certainly Norman McLaren, especially with his short “Blinkity Blank” which works on intermittent pictures. Half of the film is black. The brain and the eyes has to complete the movement. It is so nice. It works on the essence of cinema and moving pictures… I love this film as well as other McLaren’s films. An other important movie was [Jerzy] Skolimowski’s “Essential Killing”. It begins as a chase movie and ends as a tale.

Isao Takahata’s work is also important for me. He is a researcher. Each movie is different than the others…

A lot of people ask me about Matisse for the colors. More than Matisse or Dufy, I thought about Maurice Denis’ usage of greens and pinks. The colors feel so spiritual.

TMS: Do you have a favorite moment in the film?

Laudenbach: I like when the prince is coming back to the mill. This sequence is not in the tale. But as I made a water-mill, I wanted to use the river to reach the girl. The river is the still the same. The girl at the source, the mill at the end.

So when the prince is there, for me the purpose was to find the golden hands into the river, so the prince could think that by following the river he would reach his wife. But when I saw the prince in the mill, I remembered the two cut hands of the girl and thought to myself that it remained something of them. And it was incredible because is was like I saw the prince moving by itself, approaching the cut hands and eating a little bone. It was not written! It was stronger than me, stronger than him.

And I said Why? Why are you doing that? It is so strange…” I was strange but meant something to me so I decided to keep that sequence. That’s what like so much about that part of the film; because I didn’t control it. And I also like the sound. The princess’ poem he remembers: “At my father’s mill…”

TMS: The design of the devil is a fascinating one, can you tell me more about how you designed him and how other characters shapes seemed to even change at times in his presence?

Laudenbach: In the Grimm’s tale there is the devil. But there are also other versions without a devil and without an angel. I wanted to render the story more paganic, closer to Mother Nature. That’s why the devil could be in each creature, he could take every shape he wants. The devil is the evil. And evil could possibly be everywhere. One day he is an old wiseman, another day a child… Generally, the character design is moving. I didn’t use model sheets. Each character has a color and a voice, but his shape can change following the situations.

TMS: How did you decide which moments should differ from the original tale, and what parts should stay the same?

Laudenbach: I didn’t decide anything. The movie decided for me! I knew the tale, but above all, I knew was it moved me in that story and what I wanted to tell with it. So I followed a path; sort of like a destiny. And as the girl, I myself had to find out how to reach my own garden.

The Girl Without Hand here premieres in NYC July 21st, and then expands to theaters around the U.S. You can check out the upcoming screenings .