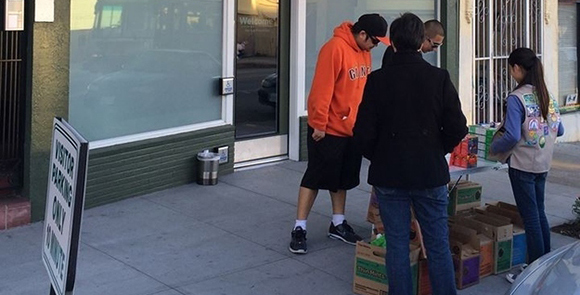 Watch out, world. Danielle Lei, future CEO, coming through. The only bad part about this story is that she’s 13 years old, which, if Wikipedia serves me right, would make her a Cadette. The universe doesn’t want me to be able to use a “pot Brownie” headline for this post.

Lei, with her mother Carol’s help, set up shop on Monday outside The Green Cross medical marijuana dispensary in San Francisco. She proceeded to sell 117 boxes in two hours, 37 less than she sold the following day when she unfolded her trestle table at a normal, non-pot-selling Safeway.

Taking advantage of marijuana users’ inherent fondness for munchables isn’t considered kosher by whatever severely unchill Girl Scout exec Tweeted this in response to a (Photoshopped) pic of a similar situation that made the rounds a few weeks back:

If you are wondering, we don’t allow our Girl Scouts to sell cookies in front of marijuana shops or liquor stores/bars.

And another Tweet, in response to being asked “Why the negativity, man?”

@ManOfEast It is not something we advocate for our youth to be involved in. — Girl Scouts of Colo. (@GSColo) February 20, 2014

Chill out, brah. Have a Tagalong. Enjoy life.

According to Carol, their choice of venue wasn’t just about raking in the most dough. Via Mashable, she

figured this might be a good way to start a conversation about drugs and how some use marijuana as medicine while others just get high.

“You put it in terms that they may understand,” Carol said. “I’m not condoning it, I’m not saying go out in the streets and take marijuana […] It also adds a little bit of cool factor. I can be a cool parent for a little bit.”

“Girls are selling cookies, and they and their parents pick out places where they can make good sales. The mom decided this was a place she was comfortable with her daughter being at… We’re not telling people where they can and can’t go if it’s a legitimate business.”

The Green Cross isn’t quite ready to let go; they write on their Facebook page that the cookies will be on sale again tomorrow, February 22nd, from 4-6 pm, with half the proceeds going toward “Alzheimer’s related charitable causes. Cookies, cannabis, and charities, what more can you ask for!?”

(via Neatorama, BuzzFeed, picture via The Green Cross)