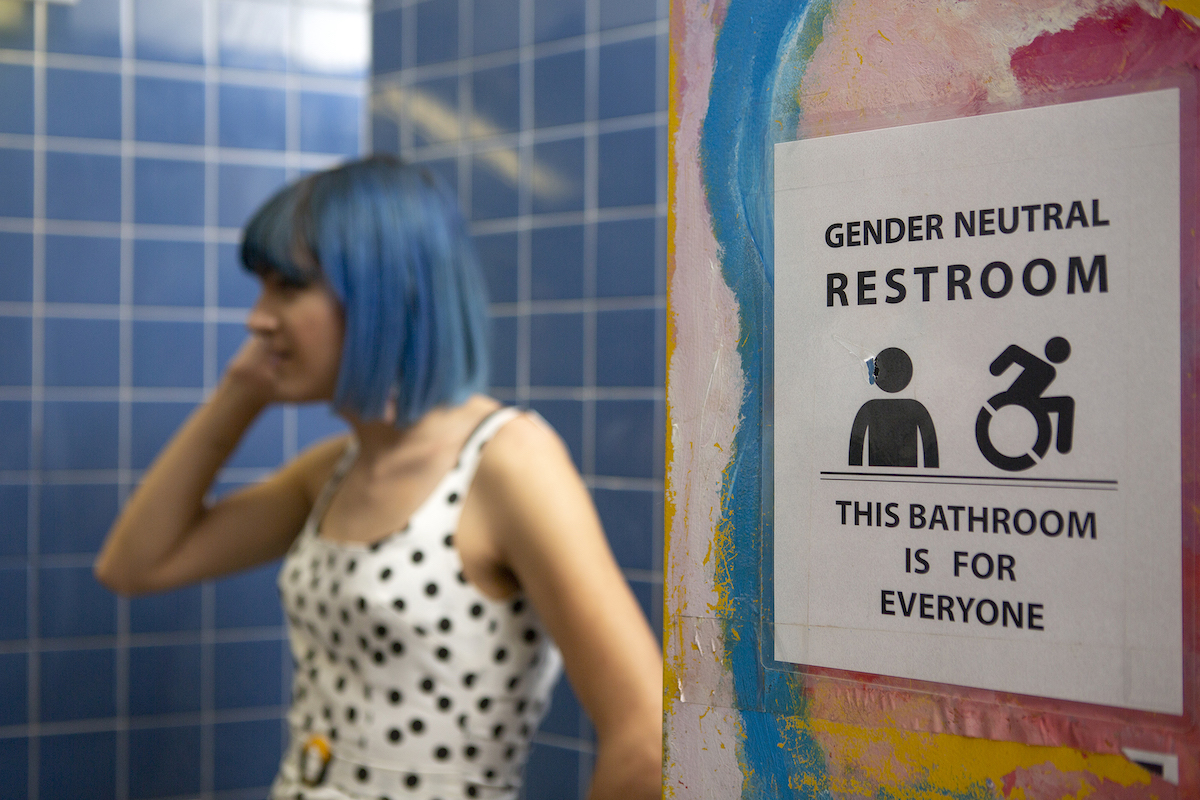 At a high school in Alaska, a female student has been expelled for defending herself against a group of boys who had cornered her in a girl’s bathroom.

According to the Washington Post, the boys entered the girl’s restroom with the intention of taking a selfie for Snapchat as a “form of protest” against a male transgender student using the boys’ bathroom. So already they’re off to a pretty despicable start. That student wasn’t involved in the incident but a female student was in the girls’ restroom when the boys came in.

The boys reportedly blocked her from exiting, at which point she kneed one of them in the crotch. Apparently, there was a Title IX investigation into the incident and according to School District Superintendent Karen Gaborik, there was “not evidence that the boys were threatening any student or using any type of force toward students.” Except the mere presence of a group of boys in a girl’s bathroom sounds incredibly threatening. I can’t even imagine what sort of aggressive energy they might have been putting out, hyped up on their anti-trans “protest” plans, but even without that speculation, I can’t doubt that this girl seriously felt she was acting in preemptive self-defense.

Alaskan state representative Tammie Wilson brought up the incident in a recent news conference and while there reportedly may have been some misinformation in the details of what she said, she made it clear that she supports the girls and other girls who might find themselves in a similar situation. “If you ever feel threatened for your safety, whatever force you think you have to give, I will stand behind you,” she said.

In an interview with the Fairbanks Daily News-Miner, Wilson said she’d spoken with the girl’s family. “I said, ‘Good for her,’” Wilson said. “I would have taught my daughter to do the same.”

“Was she supposed to not protect herself?” Wilson said. “She was where she belonged. They were not.”

I’m glad this girl is getting such wide attention and support. But the issue of the boys “protesting” a transgender student’s rights also deserve that much attention and support. The boys appear to have organized the incident over Snapchat, where they misgendered the student and demonstrated a fundamental misunderstanding of gender identity. There is an incredible amount of hypocrisy on display when a group of cis boys appear threatening to a cis girl in a women’s restroom and the girl ends up expelled.

So…after all the bullshit bathroom panic bills about trans kids, when a group of cis boys actually harass girls in a bathroom the girls are punished for defending themselves? https://t.co/gObwwWO2z2