Girls Like Comics That Are Good | The Mary Sue 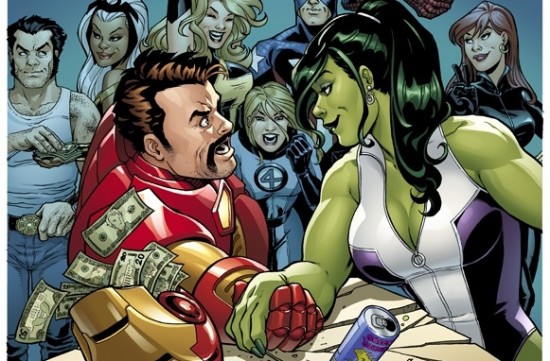 In any industry there is big money in cornering a new market for your product, and American comics are no exception.  Kids, they’ve got a handle on.  They are also pretty in tune with the adult male, after all, the American comics industry is run by adult males. But women and young girls… well.  I mean that’s some enigmatic shit right there.  We’re mysterious.  Who knows what women like.

Female comic creator Hope Larson did her own survey of about 200 female comic readers who started reading in their teens, and has reported her findings.  The results are shocking.  She summarized the answers to her third question, “what comics were your favorites as a teen/tween?” as follows.

Superhero comics were the most popular category of comic, closely followed by manga. Goth/horror and webcomics were also popular.

Considering that this survey was of women who are no longer teens and who started reading between the ages of 8 and 13, we’re looking at people who started reading comics in the late nineties or earlier.  I’m pretty sure the ’90s X-Men are very fondly remembered, Sandman is perennial, Alan Moore has written some of the best comics in history.  The late nineties were also when Batman: The 10¢ Adventure kicked off Bruce Wayne: Murderer?, and when Hush started to come out, a couple of big Batman events that have not been surpassed in the ten years since.

In answer to “what appealed to you about your favorite comic?”

The thing that drew most respondents to their favorite comics was the characters: Either relatable, realistic characters (like the misfit X-Men) or “kick-ass” wish-fulfillment characters.

A compelling story and strong artwork were of nearly equal importance to teen readers, with the story being slightly more important.

Newsflash, everybody.  If you make a good product, people will buy it.  Women don’t need a comic book equivalent of the Lifetime Channel, and DC and Marvel are really not equipped to provide it.