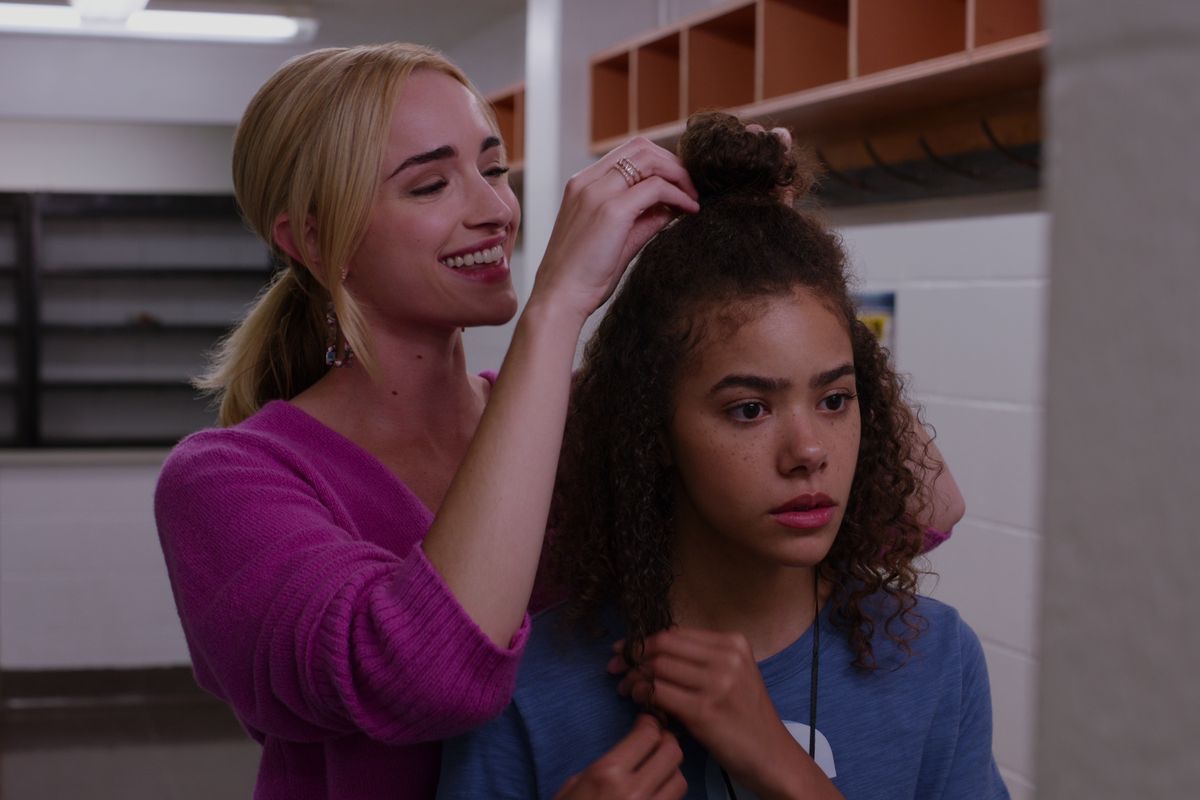 Last year, the Netflix series Ginny & Georgia was released. It did not have much in the way of big marketing, but it did have a viral moment when a super cringe clip was shared between two characters, one half-Asian and one half-Black, engaging in what felt like Oppression Olympics, as written by Twitter. Then finally, on a recent trip at the recommendation of a friend, I decided to check it out and see what exactly it was all about.

Created by Sarah Lampert the series is essentially Gilmore Girls meets Pretty Little Liars, with a little bit of Desperate Housewives. Our titular ladies, Ginny (Antonia Gentry) and Georgia Miller (Brianne Howey), are a mother and daughter duo. Ginny is Georgia’s oldest daughter and half-Black, but they also have little Austin Miller, Georgia’s youngest child and Ginny’s half-brother. After the death of her step-father, the family moves to the New England town of Wellsbury in order to start a new life.

Oh, and Georgia murdered her ex-husband after seeing him act inappropriately with Ginny, and that is only one of the criminal activities in her long, decorated past.

While Ginny & Georgia is very cringe in some ways, especially when it incorporates Twitter-lingo into its dialogue, at the heart of it is one of the few shows that deals with what it is like to be one of the few non-white people in a mostly white small town. From the first episode, Ginny is forced to confront her teacher, Mr. Gitten, who assumes she is not going to be able to keep up with AP English. Yet, there is also an interesting examination of what it is like for Ginny, who was primarily raised by her white mother, to connect with Black people versus non-Black people.

The first friend she makes there is Max (Sara Waisglass), a white lesbian character, and she gets brought into that friend group made up of Abby (Katie Douglas) and Norah (Chelsea Clark). Norah is an Asian adoptee of a white family and as dark as that friend group gets. This isn’t to say that there isn’t some diversity there, but none of them understand her Blackness.

During one episode where there is a sophomore sleepover, all the girls want to get ponytails and tell Ginny to get one, but there are no brushes that can work with Ginny’s texture, making her look ridiculous. Throughout the first season, there is a dark-skinned Black character named Bracia who invites Ginny to stuff, but Ginny keeps her somewhat at a distance.

Then, in episode 10, “The Worst Betrayal Since Jordyn and Kylie,” (yes, I know, I rolled my eyes, too) during AP English class, they read from Virginia Woolf, and Mr. Gitten takes a brief pause to explain that Woolf uses the “N-word” in a passage and explains that it is a “problematic word in today’s context—unless, of course you’re listening to a rap song.” It is a very cringe moment, and it is topped off into further microaggression when, at the end of his statement, he singles out Ginny by name—the only Black person in the class.

I felt this scene.

I’ve been Ginny in this situation, with the pressure of so many white eyes looking at you to respond in some way. In that moment, the only person who shows empathy to her is her Asian ex-boyfriend, and she ends up running to the bathroom and runs into Bracia, and they talk about the Black issues at the school. However, it goes even deeper and Bracia explains that the reason she is a little distant from Ginny is because of the colorism that allows Ginny to navigate the white spaces in a way she does indulge in.

It’s a good conversation, and that level of complexity is part of why, despite its CW drama, I really liked Ginny and Georgia. Even the “Oppression Olympics” scene is a lot more complicated than the framing shows.

Ginny has straightened her hair, seemingly to make her feel more grown-up and fit in, and realizes she is behind on the college extracurricular hustle and tries to catch up by doing this essay contest. After going to a spoken word event with her father Zion, she finds herself wanting to connect more to that side of herself and writes her essay like a spoken work piece. She doesn’t win, but her boyfriend, the half-white, half-Asian Hunter Chen, does. They get into an argument because of this, and it turns into the Oppression Olympics clip that went viral.

The scene isn’t perfect, but in the context of the larger story, it is much more narratively relevant than what happens if you distill it to a clip on Twitter.

Emily VanDerWerff put it well in her review on Vox: “… its charms are considerable, and it riffs on Gilmore Girls without being beholden to it. It made me nostalgic for the heyday of the WB.”

The show is silly, but it has heart and charm, and the kind of over the top-ness that has made Riverdale keep surviving. I am glad I gave it a chance because yes, sometimes a show does need space to actually grow into what it wants to be.