The Mandalorian actress doubles down on her bad pronoun joke. 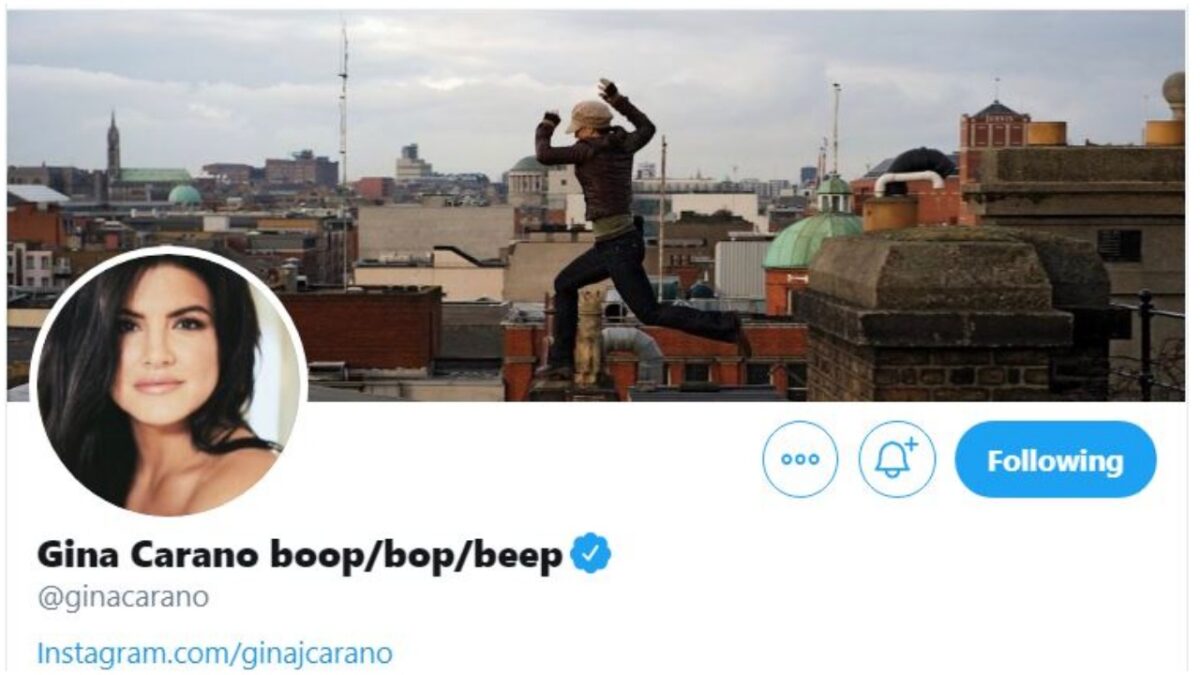 The Mandalorian star Gina Carano has come under fire for mocking the usage of pronouns in her Twitter bio. The former MMA fighter added “boop/bop/beep” to her name in a poorly conceived joke on people sharing their preferred pronouns. And when called out for it, Carano claimed she supported trans people, but refused to change her bio.

Carano is not alone in questioning why people are including their pronouns in their bios, their email signatures, and their introductions. We do so because when cis people share their pronouns, it hopefully makes it easier for trans, non-binary, and gender non-conforming folks to do the same. In GLAAD’s “Tips for Allies” guide, they encourage folks to share their pronouns because “This sends the message that you are not making assumptions about anyone’s gender, and that people are free to self-identify.”

“Sharing your own pronouns is a great idea, but it isn’t requisite. Keep in mind, however, that there is a privilege of appearing in a way that fits both your gender and the pronouns that many people associate with your gender. In other words, if people’s assumptions are correct, never having to name those assumptions begins to normalize the very process of making assumptions (which for others may be incorrect). Thus, sharing pronouns is a great way to disrupt the normalization and privilege of assumption.”

Is Gina Carano, or anyone, required to share their pronouns? Of course not. And if she posted the joke out of ignorance, out of not understanding why pronouns matter, that would be one thing. But Carano admitted that her co-star Pedro Pascal had explained why pronouns matter. Carano wrote, “I didn’t know before, but I do now. I won’t be putting them in my bio but good for all you who choose to. I stand against bullying, especially the most vulnerable & freedom to choose.”

Look, we’ve all said and/or done offensive things. We’ve all had moments of ignorance, cruelty, and lapses in compassion. But hopefully we learn from them and we grow and we do better. But while she claimed to understand the meaning of pronoun usage, she refused to change her message. While she doesn’t have to post her pronouns, she also doesn’t have to mock others who are. That’s when ignorance turns into transphobia and cruelty.

So, Gina Carano spoke to Pedro Pascal who explained pronouns and why people have them in their names and Gina decided to mock that. She really is trash. pic.twitter.com/giQ9agx8Oq

It’s ok. You deleted it. But I saved it. I’ll block out your handle because I don’t encourage bullying. See how that works. pic.twitter.com/6hpODBTYKW

But Carano is no stranger to internet controversy. She was recently criticized for posting anti-Black Lives Matter messages, objecting to face masks, and dismissing concerns about the coronavirus:

The world IS open but no one is allowed to work. Working is a right you, as an American have. It gives us purpose, focus, pride and most importantly a way to support the ones we love. People are dropping like flies from depression and suicide, overdoses, MURDER. Enough already.

Many took to social media to call out Carano for her transphobic profile:

“I❤️don’t❤️encourage❤️bullying❤️” says @ginacarano while she dismisses the bullying that trans people face and refuses to call out her supporters who send death threats to minors.

What Gina Carano is doing with her platform, which includes mocking trans folks, spreading lies about masks, and coyly disparaging BLM, is wrong.

This isn’t a matter of “let her have an opinion.” These are harmful ideas, exponentially so when spoken from such a platform as hers.

The bar is in hell, Cmon Gina Carano, it costs zero dollars and about 3 seconds of thought to not mock trans people. Transphobia isn’t funny and even the smallest show of support can mean the world. https://t.co/ZIctbUdfBj

Anyways @ginacarano you’re not going to see this because you blocked me, but your words and actions are hurting people. To everyone else, continue to wear a mask and putting your pronouns in bio because it’s the right thing to do ❤️

if you didn’t want to add pronouns to your bio that’s FINE you don’t have to but why then go out of your way to add fake ones? that just comes off as needlessly cruel

gina carano can be openly hateful and transphobic but john boyega has to be afraid of being fired for going to a black lives matter protest. what is wrong with this picture?!

Pedro Pascal and Gina Carano are two perfect examples of being privileged vs being marginalized.
Pedro was born in Chile, his family fled a dictatorship, he is a refugee. He also respects and fights for others rights.
Gina is a white woman born in the US. pic.twitter.com/FJtji7Cl1d

gina carano now lying. people were angry because she supported mocking users for having pronouns in their bios by calling us weirdos and freaks. and now she pulls the beep/bop/boop crap pic.twitter.com/6MB6bJJ8b0

I have ascended to new Twitter heights, Gina Carano, who plays the badass Cara in #TheMandalorian, blocked me for pointing out the fact that masks are not a matter of choice out in public. I’m sure she’s a lovely person irl, but her comments are founded on ignorance. Oh well pic.twitter.com/ASHJYBL4Fv

What’s all the more frustrating is that Carano is playing the victim here. Girl, you started it by doubling down on mocking trans people! You’re well within your rights to post offensive and ignorant stuff, but you can’t act shocked when people call you out for it.

Gina Carano saying stuff like “don’t judge” and “don’t harrass” then literally mocks an act that is done to support transgender people….. the transphobia is strong in this one.

— someone put a bounty on me so mando can come here (@bodhisoftrook) September 13, 2020

This just … sucks. I liked Gina Carano. I really liked Cara Dune, and was excited to see her have more of a presence in season 2 of The Mandalorian. Thanks to the smash hit series, Carano now has an ever-growing platform and a fan base for which she could model compassionate behavior. She could set a positive example, but she chooses not to.