How does this still have to be said? 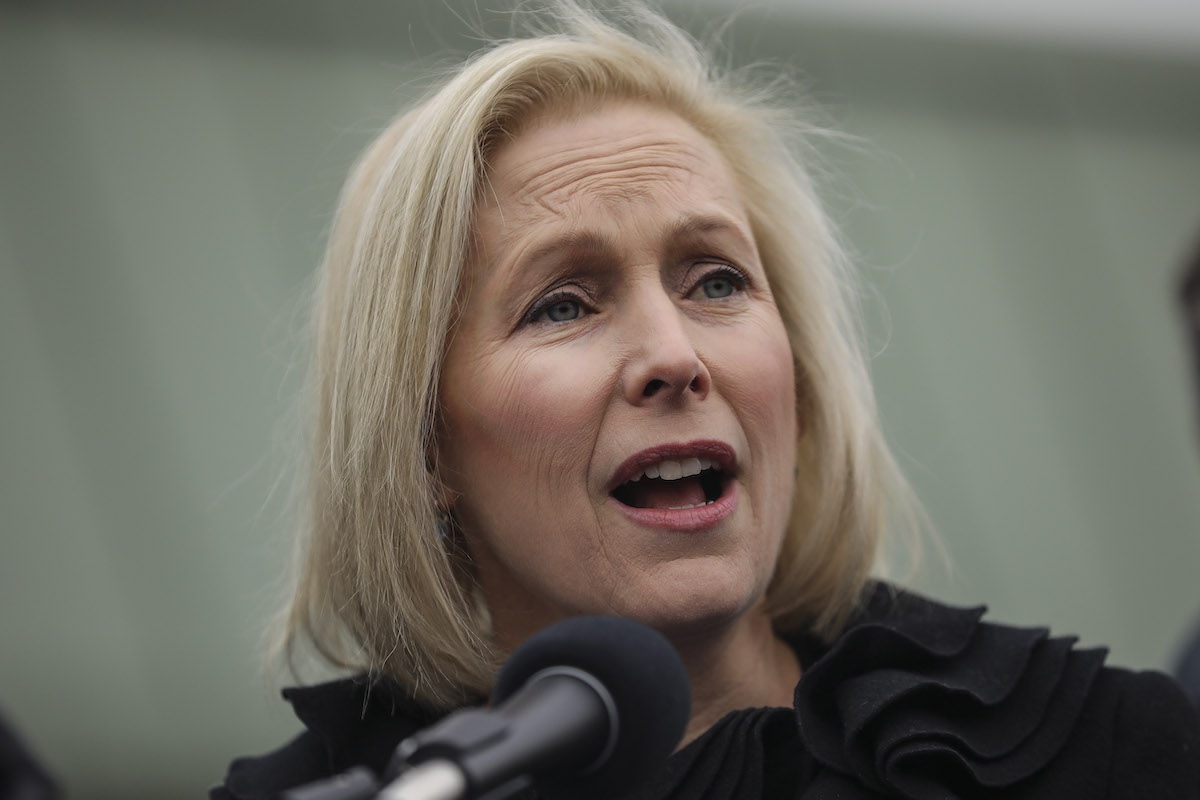 Last night, New York Senator Kirsten Gillibrand announced on Stephen Colbert’s Late Show her plans to run for President in 2020. She laid out her platform, telling Colbert that she planned to “fight for other people’s kids as hard as I would fight for my own.” She cited healthcare as a human right, better public schools, and access to job training as a path to economic advancement as her top priorities.

“But you are never going to accomplish any of these things if you don’t take on the systems of power that make all of that impossible,” she continued, “which is taking on institutional racism, it’s taking on the corruption and greed in Washington, taking on the special interests that write legislation in the dead of night. And I know that I have the compassion, the courage, and the fearless determination to get that done.”

A visit with @stephenathome is always good for a few laughs. Last night, I shared some news, too. pic.twitter.com/RiTzsyQyEu

Unfortunately, a lot of people didn’t care about her ambitious declarations, as shortly after her announcement, not just her name began trending online, but also Al Franken’s. Replies to her announcement video were filled with people saying they’d never vote for her because she “betrayed” Franken, “threw him under the bus,” or some other variation of accusing her of ruining his career.

Similarly, a new batch of articles are being run that say Democratic donors are privately hesitant to back her for the same reasons. (Articles like these have been coming out about Gillibrand for months.)

As with any presidential candidate, there are valid reasons why one might not support Gillibrand. But standing by her convictions and speaking out against Franken isn’t one of them. Because that’s what she did—she spoke out. She did not force him out. And she certainly wasn’t the only member of Congress to do so.

Kirsten Gillibrand was the first person to say she thought Franken should resign, but ultimately, she was one of more than 30 Senate Democrats to do so. And while she was the first to speak publically, Senate Minority Leader Chuck Schumer urged Franken to resign through multiple phone calls and a personal meeting with both Franken and his wife at Schumer’s apartment.

None of this was sudden and none of it was because of Gillibrand, at least not because of her alone, or even primarily. Democrats had been reportedly trying to figure out what to do with Franken “for a while,” before all the allegations against him were made public.

A lot of people are upset that Franken didn’t get an ethics investigation. But again, that was his choice. Gillibrand wrote in a Facebook post at the time, “While Senator Franken is entitled to have the Ethics Committee conclude its review, I believe it would be better for our country if he sent a clear message that any kind of mistreatment of women in our society isn’t acceptable by stepping aside to let someone else serve.”

Many are upset over the double standard of Trump being in office while Franken resigned. Gillibrand also addressed that, and how we cannot allow Republicans to set the bar for our own standards of integrity.

“In the wake of the election of President Trump,” she wrote, “in just the last few months, our society is changing, and I encourage women and men to keep speaking up to continue this progress. At this moment, we need to speak hard truths or lose our chance to make lasting change.”

Kirsten Gillibrand had already long established herself as an advocate for women’s rights. Were people expecting her to be able or even eager to set that aside? Would they have been happier if her beliefs had been superficial enough for her to do so?

Again, regardless of what you think of her candidacy, Gillibrand is a leading voice on sexual assault. Her call for Al Franken to resign was entirely consistent with her principles. You say you want principled leaders, but then you vilify Gillibrand for being too principled. 7/

Again, Al Franken chose to resign. His colleagues were encouraging him to do so but he had the option to let the Ethics Committee do their investigation. There are so many people bemoaning Franken’s lack of “due process,” but why do they insist on blaming Gillibrand for essentially robbing him of that right rather than question why Franken would choose to forego it?

And for those who don’t think the allegations against Al Franken (by 8 different women) were credible: Why are you lashing out at Kirsten Gillibrand? Why aren’t you angry at Al Franken for resigning before an investigation? Perhaps because you know he resigned for good reason. 8/

We can be angry about Franken’s resignation from the Senate. He was a strong voice in the fight against the Trump administration’s oppression and corruption (as Gillibrand continues to be). But the person to be angry with is Franken himself. There is only one reason why he’s no longer serving in the Senate and that is his own actions—actions which include the decision to resign.

We can acknowledge the role Gillibrand played in the timeline of his resignation, but it’s entirely unfair to create a narrative that doesn’t include the influence of the Senate Minority leader and 30 other senators. And it’s definitely unfair to treat Franken himself as a tragic victim in his own story. Franken admitted his behavior “crossed a line.”

As writer Caroline Orr, whose tweets are embedded above, said later in her insightful thread, “Kirsten Gillibrand is receiving more anger for saying his behavior was wrong than the man who said it himself. If you don’t see a problem with that, well, maybe that’s because you’re part of it.”

Blaming Gillibrand for Franken’s actions is not only unfair to Gillibrand, but it sends a message to all victims of sexual harassment as well as their advocates that they can only expect support if their expected allies have nothing to lose from seeing the harasser lose his status. If that man is beneficial to them or to a cause, then they are expected to keep quiet and vilified if they don’t.

The message is that a woman’s safety and wellbeing is never as important as a man’s career. Gillibrand refused to send that message and she should absolutely not be punished for it.