Ghostbusters Review: I Ain’t Afraid of No Women Being Excellent 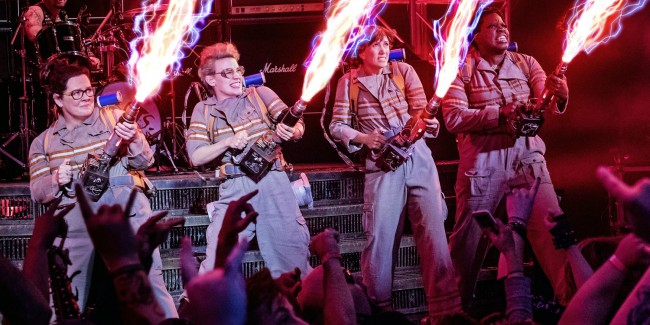 Ghostbusters surpassed my expectations in every way. It was funny throughout, well paced, with no huge downswing. If I have one criticism about the movie’s structure, it’s that the ending falls slightly flatter than the rest; but as a huge fan of the 1984 Ghostbusters (it holds special childhood movie status with me), I have to say the 2016 movie is just as good as the 1984 movie. Sony has a hit on its hands.

The movie’s villain, Rowan (Neil Casey) is a disgruntled asshat who thinks he’s had it hard all his life. To get revenge against his bullies, Rowan stirs up trouble in Manhattan. He aims to command a ghost army by placing devices around the city that break ghosts into the human world. Abby Yates (Melissa McCarthy) and nuclear engineer Jillian Holtzmann (Kate McKinnon) are working on ways to defend against and capture ghosts. Erin Gilbert (Kristen Wiig) later joins them, followed by MTA subway worker Patty Tolan (Leslie Jones). Together the Ghostbusters fight back against ever-increasing odds to save the city.

Stand out characters include Chris Hemsworth’s Kevin, who has awesome comedic timing. Kevin is a brilliantly simple and a fun role, essentially the eye candy/ puppy dog that the women love and look after. I think some of the men in the audience may cringe, but guys – women have had this done to us in thousands of movies. This one character doesn’t even begin to rebalance those scales.

The movie’s absolute standout is Kate McKinnon’s Holtzmann. She’s the inventor of the Ghostbusters’ gadgets, and she’s so delightfully over the top. She’s damn hot and you’re going to see her cosplayed everywhere.

One justified criticism from the first trailer was the portrayal of Leslie Jones’ character, Patty. The trailer was put together in a way that emphasized that she was the only non-scientist and it made the movie look flat-out racist. Jones took to Twitter to provide some perspective to her character that we couldn’t have had before the movie came out. Patty may not be a scientist in Ghostbusters, but she’s smart in a number of ways and provides the team direction and information at critical points. In the end she makes the decisive call that leads to the resolution and she’s exactly what the team needed. It’s a shame she’s the only non-scientist but it’s not as bad as the trailer made out when you have the context of the rest of the movie.

I know Ghostbusters 1984 is problematic but it’s still something of a fave of mine. As a long time fan, with my own uniform and props, I feel well placed to say that Ghostbusters 2016 is as good as Ghostbusters 1984. The original has an amazing first half but the second half falls away slightly. Ghostbusters 2 is a pretty terrible movie, it hits the odd high note but generally it’s like watching your dad try to rap; it really isn’t how you want to spend your time. Ghostbusters 2016 doesn’t quite reach the highs of the first half of the original but it never sinks to the lows of that movie either.

The movie is very safe for kids as young as 8 or so as it does have a couple spooky ghosts and a few jump scares. If those don’t bother your kid then it’s fine for the younger ones, too. Girls are going to love having an action movie where they can see themselves on screen. This really is a first and it’s worth celebrating. Make sure you stay to the end of the credits as there is an extra scene that hints to where the sequel might go. This is easy to do as the credits themselves are fun with Chris Hemsworth dancing through them.

Paul Feig’s Ghostbusters is straight up fun that you can’t miss. Go bust some ghosts.