Why Is Patty the Non-Scientist Ghostbuster? | The Mary Sue

So … Why Is Patty the Only Non-Scientist in the New Ghostbusters? 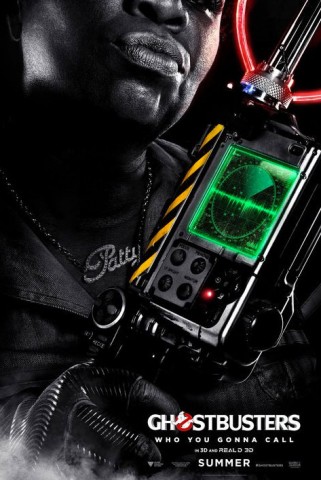 We all love the new trailer for Paul Feig’s upcoming Ghostbusters movie. But there’s one aspect that stuck out to every single one of us here on staff at The Mary Sue: why is Leslie Jones’ character the only non-scientist in the group? Why is she getting framed as the “street smart” character — the one who supposedly doesn’t have as much technological know-how as the other three women on the team? In other words, why is the 2016 Ghostbusters rehashing the exact same tropes as the original Ghostbusters did with Ernie Hudson’s character?

Now, we could be wrong — perhaps that’s not the direction that the movie’s heading. After all, this is only a trailer. Perhaps Patty will turn out to have a PhD as well, like the rest of the other female characters. (Her character has been referred to as a “municipal historian” in previous marketing.) That said, it’s worth noting that all three of the white protagonists in the film have higher degrees, whereas the one black character does not. Or, at least, if she does, it’s not mentioned in the trailer at all — unlike with the other characters, whose institutional accolades do get mentioned.

It’s worth revisiting Ernie Hudson’s own experience with earning the role of Winston in the first Ghostbusters; in the original script, Hudon’s character had a different role. Hudson explained to EW,

When I originally got the script, the character of Winston was amazing and I thought it would be career-changing. The character came in right at the very beginning of the movie and had an elaborate background: he was an Air Force major something, a demolitions guy. It was great.

Now I’ve heard, over the years, that the part had been written for Eddie Murphy—all of which Ivan Reitman says is not true. But it was a bigger part, and Winston was there all the way through the movie …

The night before filming begins, however, I get this new script and it was shocking.

The character was gone. Instead of coming in at the very beginning of the movie, like page 8, the character came in on page 68 after the Ghostbusters were established. His elaborate background was all gone, replaced by me walking in and saying, “If there’s a steady paycheck in it, I’ll believe anything you say.” So that was pretty devastating …

30 years later, I look back at the movie and it works very well the way it is. I think the character works with what he has to work with. But I’ve always felt like, “Man, if I could’ve played that original character…”

Ernie Husdon goes on to elaborate that his character was often left out of press coverage about the movie, and that his character seemed to end up framed as “sort of the Everyman, he’s kind of the guy who helps the audience understand.” Hudson now has “kind of a love/hate” relationship with the changes to the character; although he does still emphasize that he feels honored to have been part of the film, he still feels understandable disappointment about the changes to the character.

In the later animated version of Ghostbusters (which doesn’t necessarily obey the same canon as the movies, but that’s an argument for another day), the character of Winston is stipulated to not have a PhD at all. There’s even one episode, titled “Mr. Sandman, Dream Me a Dream,” in which Winston gets insecure about the fact that “unlike his three colleagues, he is not a scientist, causing him to doubt his ability to resolve a crisis.”

Many people might justify Ernie Hudson’s experience as a product of the distant past — the racism of Hollywood 30 years ago. But 30 years wasn’t actually that long ago, and now that we’re looking at the new Ghostbusters trailer, it’s clear that these same patterns have stuck around. For example, Leslie Jones’ character even provides the car — just as Ernie Hudson was nearly always the driver in the original movies and cartoon. Let’s run down the stereotypes here: there’s the “black chauffeur” stereotype, along with the stereotype of the black characters being religious and/or superstitious — as Ernie Hudson’s character was and as Leslie Jones’ character appears to be in the new trailer. Lastly, there’s the over-arching idea of a black character providing the means to “help the audience understand” the techno-babble of the scientist white characters, presumably by translating into “Everyman” language (as Ernie Hudson explained). The unfortunate implication is that audiences wouldn’t buy it if a black actor played “the smart one” and got to have actual technical expertise (unless that’s made into the joke, rather than set forth as realistic).

These are exactly the types of simplistic tropes that should not continue to happen in movies today. This new movie is going to get remembered forever as “the gender-swapped Ghostbusters,” for better or for worse — but it would have been nice to see the film try to fix some of the other problems with the original Ghostbusters as well, beyond just swapping the genders and leaving the rest as-is.