Come, Overanalyze the First Look at Ghostbusters’ Female Slimer With Me 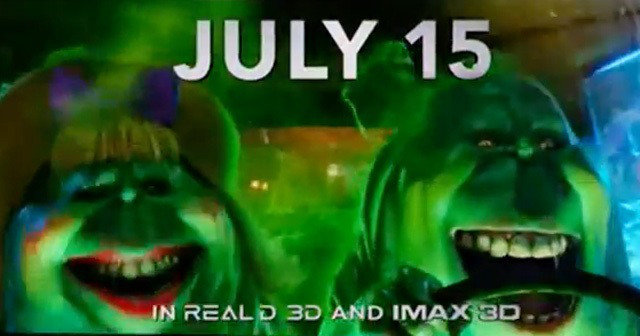 Apparently there’s a female Slimer in the new Ghostbusters, so that’s fun and cool! You can see her above, driving in a ghost car with original Slimer, in a still from a new Ghostbusters TV spot.

For me, the humor in that bit came from the sincerity with which Kevin felt he had to add something extra to a drawing of a ghost—essentially just a floating sheet!—in order to convince his audience of the logo’s womanhood.

The conviction with which he added boobs, long eyelashes, and ghost-lipstick seemed to me like a reminder of men’s tendency to presume male as default. In other words, if Kevin were to see a formless character (like a sheet ghost) he would automatically assume they’re a man, even if they’re not male-coded; but he only believes a sheet-ghost is female when she’s female-coded. Women are an afterthought.

Judging from this first glimpse of female Slimer, I wonder if her look will be a commentary on that tendency as well. (Am I reading too much into things? Possibly. I have to pass the time between now and Ghostbusters‘ release on the 15th somehow!)

It’s just interesting to me that, while male Slimer gets to be an amorphous blob of ectoplasm whose gender isn’t suggested by clothing or cosmetic choices, female Slimer has long hair, lipstick, and an itty-bitty hat. Gender is performance, but female characters have to perform much more than their male counterparts.

Regardless, it’ll be interesting to see how the Slimers interact in the movie. Are they a married couple? Related? Friends? Slime will tell.

What do you think of New Slimer? Will she ruin any childhoods?