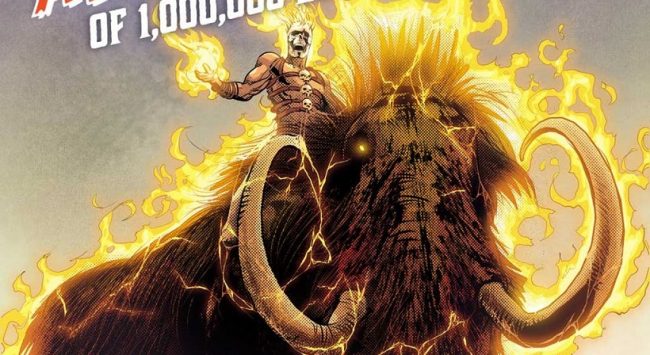 [Update: Multiple readers reached out to say this is more likely a woolly mammoth than a mastodon, due to the curving tusks. I’ve therefore changed the wording, but “flaming mastodon” is still available for your roller derby rosters and rock band names.]

Marvel has released Mike Deodato Jr.’s character designs for The Avengers of 1,000,000 BC, a new one-shot that imagines the prehistoric versions of Agamotto, Black Panther, Ghost Rider, Iron Fist, Odin, the Phoenix Force, and Star Brand. And while I was curious how Ghost Rider, so associated with the modern motorcycle, could possibly be reimagined for prehistoric times, I have not been disappointed. 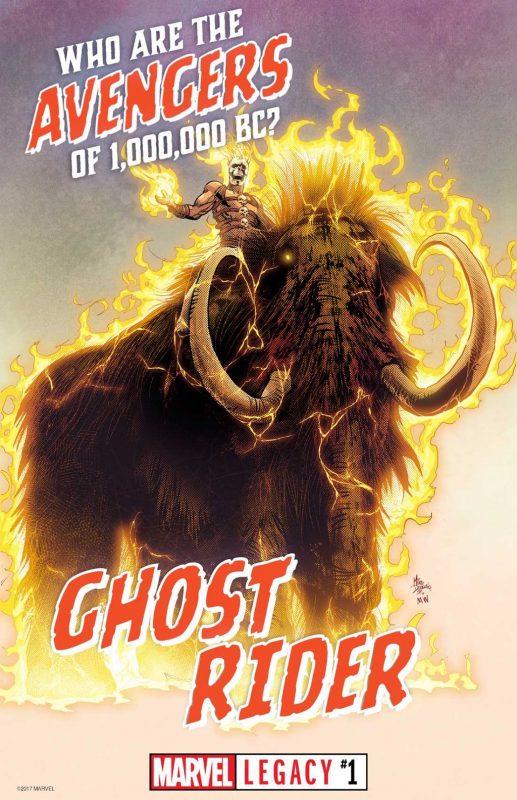 While some of the other designs were frustratingly midriff-y, this version of Ghost Rider is a home run. I love how the mammoth’s tusks remind me of motorcycle’s handlebars, and I love that Marvel embraced the batshit potential of designing a ride for a character who’s literally a flaming skull.

(Dearest and most problematic Marvel, please note that is an excellent example of how I’d like my classic characters reimagined: riding magnificent Hellfire steeds from another time. Not as retconned Nazis. Cool? Cool.)

The Avengers of 1,000,000 B.C. will arrive in comic book shops on September 27, 2017, as part of a 50-page one-shot from Jason Aaron and Esad Ribic. The one-shot will tell the “startling origin of the Marvel Universe” and kick off the Marvel Legacy event. Legacy itself, according to Marvel Editor-in-Chief Axel Alonso, “will unearth gems from Marvel’s rich history, remind readers of connections between characters, and usher in the return of some major characters who’ve been missed.”

(Via io9 and CBR; image via Marvel Comics)