Today’s Google Doodle honors horticulturist and garden designer Gertrude Jekyll who was born in London on this day in 1843. Jekyll, whose name you might recognize as her brother’s friendship with Robert Louis Stevenson led him to borrow their surname for Dr. Jekyll and Mr. Hyde, created landscapes and garden designs that had lasting influence due to her work in color schemes, textures, and other kinds of composition that offered, “unexpected views and pictorial surprises.” It is her 174th birthday.

Though many of her gardens no longer exist, their influence in both the UK and in America is prominent, as more designs moved away from the traditional Victorian garden for “more freedom in planting and a wider choice of plants.” This article from Susan E. Schnare and Rudy J. Favretti in The Garden History Society states the “theories and principles that she developed…have come to constitute part of the backbone of modern landscape design.” The Google Doodle description writes:

“A woman of innumerable talents, Jekyll was also an accomplished musician, composer, woodworker, metalworker, and botanist. Her foundation as a budding artist greatly influenced her breathtaking creations. As a student, she took inspiration from the landscapes of English Romantic painter J.M.W. Turner, capturing the seasons, the light, the textures, and the hues of every growing thing on her canvases. Jekyll brought that painterly sensibility to her life’s work, designing about 400 gardens in the United Kingdom, Europe, and the U.S., which were documented in photographs, over a dozen books, and thousands of magazine articles.”

The Doodle by British artist Ben Giles “unites the hot and cool colors the horticulturist favored to create a lush and brilliant garden collage” with Jekyll in the corner. Images of Giles’ process show a different drafts of this montage of cut-outs, bursting with color and life. No doubt, it’s something Jekyll would’ve approved of. 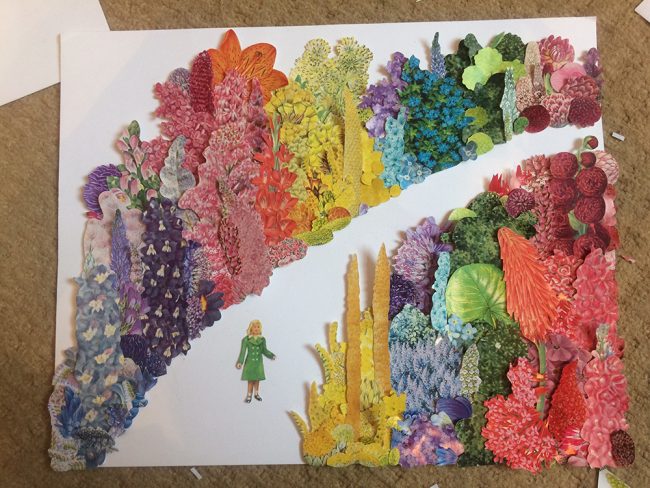