Germany Plans to Shut Down All Nuclear Reactors by 2022 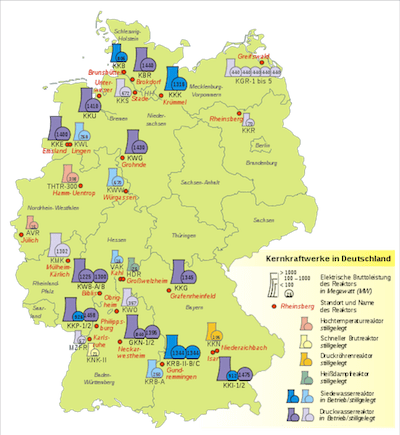 The German ruling coalition led by Chancellor Angela Merkel has announced its intent to shut down all nuclear reactors in Germany by 2022, a major decision for a country that as of last year obtained 23% of its electricity from nuclear plants.

While this policy decision was precipitated by the nuclear meltdown at Fukushima following the tsunami and earthquake in March, it’s long been the subject of political struggle in Germany, with the country’s left-wing and environmentalist parties pushing for a nuclear phaseout well before Fukushima.

To accompany the nuclear exit, Germany plans to cut electricity usage by 10 percent by 2020 and double the share of renewable energy sources to 35 percent over the same period, according to a government paper seen by Reuters.

Merkel did not outline further details of the plan but the government paper said Germany’s goal of reducing greenhouse gas emissions by 40 percent by 2020 remained in place.

In 2010 around 23% of German electricity output was produced in nuclear plants. The BDEW–the country’s main energy lobby group–said Germany has gone from being a net exporter of electricity to an importer, with nuclear-generated power from France and the Czech Republic plugging the gap caused by the shut down of Germany’s seven oldest reactors after March’s nuclear accidents in Japan.

Renewable energy currently accounts for about 16% of Germany’s electricity; compare to 11% for the U.S. and 7% for the United Kingdom.