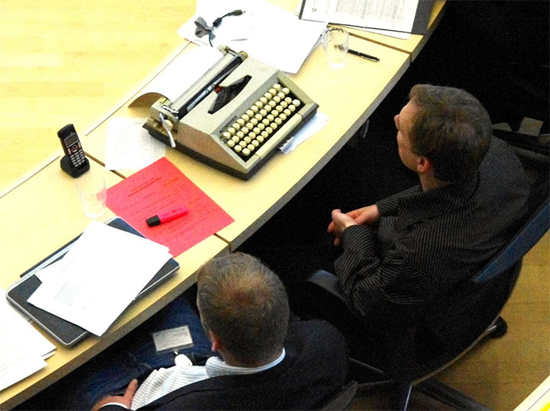 We can all agree that, at times, the incessant clicking of keyboards can be a noise issue. If you’re in the library, and folks are elaborately typing away to either side of you, it’s certainly a situation worthy of a sigh or two. This is also how the German parliament feels, as they’re now wanting to officially ban laptops from their meetings. In protest of this proposed action, Patrick Breyer and Torge Schmidt apparently showed up to today’s meeting with a typewriter.

The typewriter is obviously a stunt to remind the parliament officials of a noisier time while also, technically, following the letter of the law if not the intention. In all fairness, though, some groups in parliament actually want the government to provide them with tablets to compensate the lack of laptops, according to Breyer:

The other groups want to buy at the expense of the highly indebted country tablet computers for all Members, as existing laptops should be banned and a “uniform appearance” is to be created.

It’s almost like someone there really wanted an iPad, then figured this convoluted government manipulation was the best way to get one. Also, it’s worth nothing that while we believe the two pictured are Breyer and Schmidt, that’s going off a translated tweet, so, grain of salt and all that.