Kelly Loeffler Has One Facial Expression & One Talking Point, Plus Other Takeaways From the Georgia Runoff Debates 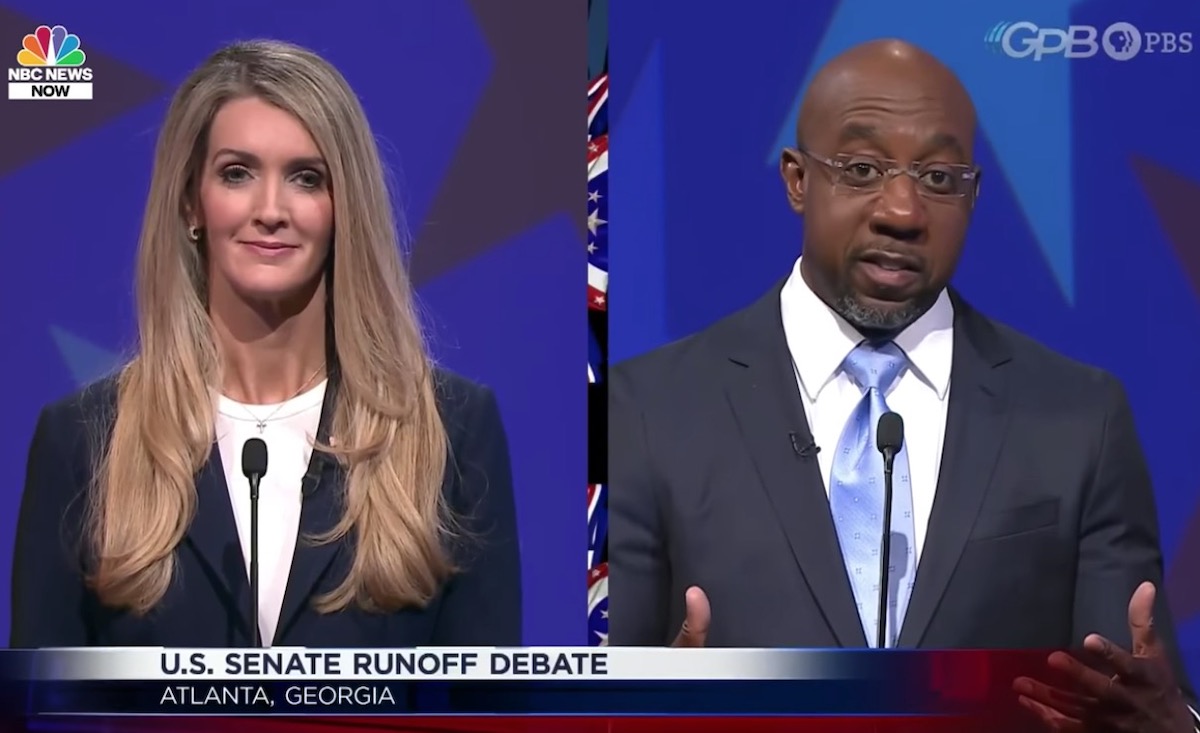 The candidates in Georgia’s Senate race participated (or were at least invited to participate) in their first and possibly only runoff debates before the election of January 5th.

Republican incumbent David Perdue refused to even show up, leaving Democrat Jon Ossoff to talk to an empty podium.

Kelly Loeffler showed up physically to debate Rev. Raphael Warnock, but as the Washington Post so perfectly described, she “was not emotionally present.” She spoke in flat notes and seemed to have a handful of set responses that she mixed and matched with every question that arose. Her face framed by her thick blond hair, Loeffler spoke directly into the camera, but she might as well have been speaking from behind a brick wall.”

For nearly the entirety of the hour-long debate, Loeffler spoke rigidly and maintained the exact same tight-lipped, dead-eyed facial expression. She was radiating a desire to be literally anywhere else.

Loeffler had one expression at this debate and basically only one talking point: that Rev. Warnock is a “radical liberal” and that that’s a bad thing. She used that phrase 14 times over the course of the hour.

“My opponent: radical liberal Rafael Warnock” – a phrase Loeffler has used in virtually every answer of the debate

Loeffler used the moniker as a deflection against pretty much every question she was asked. She wouldn’t answer whether she thought the presidential election was “rigged” as Donald Trump continues to say and she wouldn’t say if she thought Trump won the election.

Instead, she tried to have it both ways, talking about the need to obtain a Senate majority in order to keep Democrats from gaining the ability to enact legislation, while also refusing to concede that Joe Biden won the presidency.

She wouldn’t answer questions about her alleged insider trading during the COVID-19 pandemic.

After Warnock grills Loeffler about her alleged insider trading, Loeffler fires back by asking Warnock to renounce socialism pic.twitter.com/9grIsFZJfX

She also deflected a question about Black Lives Matter to say … this:

Feels like we could workshop this down to a tight three-word slogan. https://t.co/y5CvkLK1qs

Neither candidate really deviated much from their stump scripts but at least Rev. Warnock talked about who he is and how much he cares about Georgians, not just about how much he hates his opponent.

A reminder that if you live in Georgia and aren’t yet registered to vote, the deadline to do that in order to participate in the January 5th runoff is TODAY!