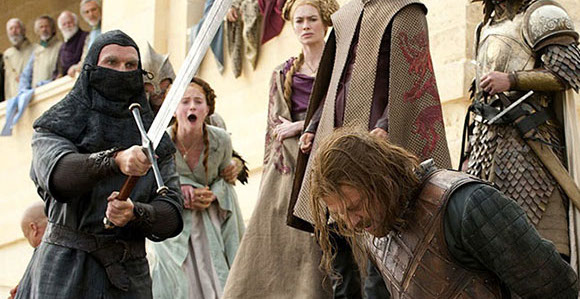 George R.R. Martin may delight in killing off beloved fictional characters, but he has a soft spot in his gleefully sadistic heart for wolves. To that end, he’s ponying up the best crowdfunding perk ever for a campaign to benefit The Wild Spirit Wolf Sanctuary in his home state of New Mexico. Commence hunting through couch cushions.

Two “Martyr”s—one male, one female—will get the chance to see themselves meet a gruesome end in “a future A Song of Ice and Fire novel” (however many of those there end up being). Via the crowdfunding page: “You can choose your character’s station in the world (lordling, knight, peasant, whore, lady, maester, septon, anything) and you will certainly meet a grisly death!” I trust you, George.

Other, lesser rewards offered are the chance to have breakfast with Martin (for $15,000), a pair of tickets to the season 5 premiere ($7,500), a “thank you e-card” (for my fellow poor folks at the $25 range)… and “George R.R. Martin’s worn hat” for $7,500. What about the fire suspenders, George?! The campaign will also benefit The Food Depot, “an amazing local charity that helps the tens of thousands of people in North New Mexico.”

Donate any money at all and you’ll be entered to win a special prize:

You and a friend will be flown out (from wherever you are in the world) to meet me in Santa Fé, where we’ll share a helicopter ride to the Wild Spirit Wolf Sanctuary.

In addition to touring the Sanctuary together, we’ll also have plenty of time to discuss the show, A Song of Ice and Fire, direwolves – and if there’s anything you have ever wanted to ask me, here’s your chance!

Now I’m just imagining poor Martin being trapped in a helicopter for hours with someone who keeps trying to trick him into admitting whether R+L=J is true (it so is). Whoever wins, be polite about it. Represent your fellow nerds well.

Which prize would you rather have, if money were no object: The helicopter ride with George, or the personalized death scene? I’d go with the latter, m’self. Hmm… I think I’d be Lady Rybeccah, and I’d be trampled to death by a herd of murderous goats. How ’bout you? Best answer gets a spot in our weekly favorite comments roundup, going up later today, because that’s the sort of perk we can provide.