WITNESS THE COMPLETE LACK OF MISOGYNY. 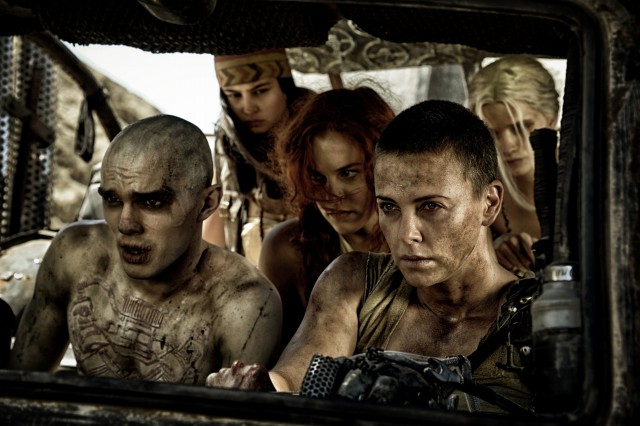 Calling it “feminist propaganda,” Men’s Rights Activists boycotted the latest Mad Max installment in advance of its film release, citing Furiosa’s apparent “replacement” of Max in his own franchise as enough justification to use the word propaganda as a descriptor for a summer blockbuster. According to early reviews, Fury Road is a near-perfect film, celebrated for its special effects, stunts, and performances (not only from Charlize Theron, but from Tom Hardy as well). So why is the MRAs’ reaction to Fury Road so strong – and negative?

George Miller has often stated that the strength of Mad Max: Fury Road’s female characters has stemmed directly from the necessity of the plot. After years of germinating script ideas, one storyline struck him as the particularly substantial: the escape of a harem from their captor King Immortan Joe – all in one single chase scene or “road war.” 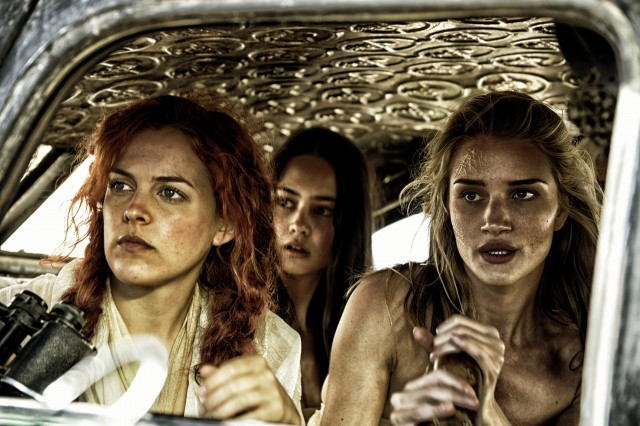 The “Wives,” coddled since infancy and raised to breed, would not have the worldly skills to escape alone. This led to the creation of a female Road Warrior – Theron’s Imperator Furiosa – in order to avoid the very different connotations that would come along with a male Road Warrior stealing Immortan Joe’s Wives.

Out of nothing more than necessity, George created a female-led Mad Max film, but – hey, wait a second, isn’t Mad Max a dude? 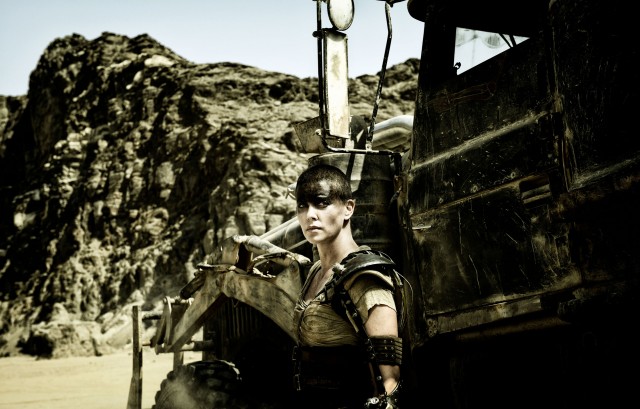 This resulting feminism isn’t accidental, of course. It’s a deliberate choice made by Miller, and he did bring in Eve Ensler, the playwright behind the Vagina Monologues, to work with the actresses on their characters. But what’s interesting about Fury Road is that its feminism isn’t pulling focus. It’s not saying, “Hey! Look at this Strong Female Character!” The film’s feminism is a utilitarian result of the plot’s mechanics. Furiosa leads the charge in Fury Road, and the narrative arc is hers, not Max’s. She is our protagonist. These are facts, not arguments. 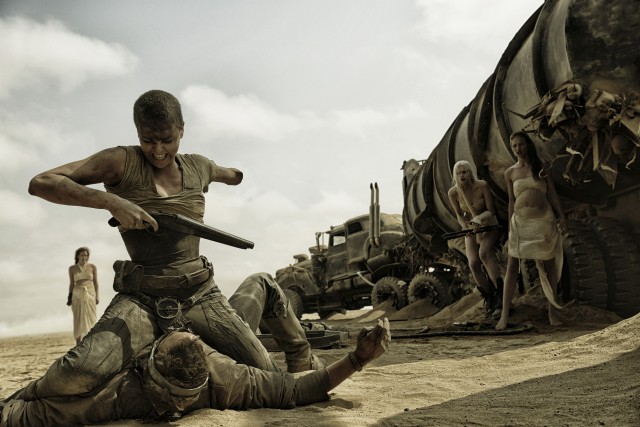 Recently, there has been an influx of female-led blockbusters, but more often than not, these films are intentionally gendered. Even though films like The Hunger Games or Divergent enjoy mass appeal, these YA franchises are still crafted and marketed specifically for young women.

Furiosa and Fury Road are such rarities because we have a female protagonist in an action film that is not targeted specifically toward women – if anything, it’s marketed to men.

Alien’s Ripley and Sarah Connor in the latter Terminator films do come to mind as other examples of this phenomenon, though their journeys are different, and arguments can be made both for and against their mirroring of Furiosa. You’re welcome to list as many heroines as possible in the comments, but the reality is that though the female-led, male-marketed action film isn’t a singular event, it’s still very much a rare one. Compound this rarity with a pre-established male-dominated cinematic universe, and Fury Road becomes a somewhat unique scenario.

Mad Max, Road Warrior, and Beyond Thunderdome are populated by men and women surviving the Wastes to the best of their ability, but with the exception of Tina Turner’s Aunty Entity, there is no focus on female agency – especially in regard to heroism. We’re three films in, and the franchise is defiantly male – created by, marketed to, and populated by men. The Mad Max franchise, therefore, is very much established as a male narrative; This is a story about the loss of Max’s family and his hard-won survival. The audience has already bought into this, and after three films, a precedent has been set. 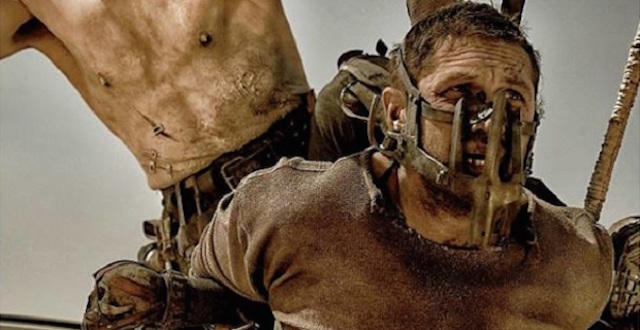 With Fury Road, however, this precedent of a masculine monopoly on heroism has been pushed aside by George Miller. A privilege, which had been all but assumed, has disappeared. Unfortunately, a section of Mad Max’s established audience has not reacted well. The MRAs’ outrage at Furiosa’s prominence in Fury Road brings sharp relief to cultural assumptions of heroism in regard to gender, and belies the generally-accepted notion that male-led action franchises are gender-neutral.

Has Miller actually taken anything away? No. He has only allowed heroism in the Mad Max universe to be co-ed. 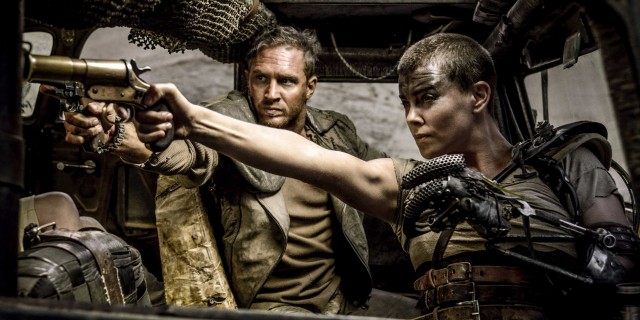 In the fourth installment of Mad Max, women are held to the same standard as the men – and that in itself is radical. As such, you can’t put a “no girls allowed” sign on Fury Road, but you can’t call it a “female film” or propaganda either.

Surprisingly, this is best explained not through the tough-as-nails Furiosa, but by its most overtly feminine character, Queen Angharad the Splendid, the most beloved of Immorten Joe’s wives.

Miller does not skirt around the sex of Splendid and the Wives. They are first unveiled to Max in a moment of vulnerability, as the Wives remove violent-looking chastity belts from their bodies. These fertile women – Splendid is pregnant – are suddenly real and present in a land plagued with drought, death, and violence.

Somewhere within the feature-length chase sequence, Splendid is nearly sideswiped by a rival vehicle, but she manages to avoid the attack, protecting herself amongst the machinery of Furiosa’s war-rig. Max, having seen that she survived, gives her an out-of-character (but still reserved) thumbs up. Splendid is obviously elated, incredibly proud of her own ingenuity.

That tiny blink-and-you’ll-miss-it moment is incredibly important to both Max as well as the audience. There is an expectation that Splendid, the film’s epitome of womanhood, isn’t well-equipped for survival. However, when she demonstrates that she can survive in the Wastes – thrive even – Max concedes that she and the Wives are worthy of Furiosa’s sacrifice and his continued support.

Untrained in the art of war, the Wives use their womanhood as tools for their own survival, weaponizing the stereotypes that would be conventionally used against them in a standard action film. For example, in another moment of bravery, Splendid transforms her body — the physical vessel for Immortan Joe’s son – into a shield for Max, Furiosa, and the Wives, recognizing her traditional role as a mother and actively using this to her benefit.

Max’s change of heart toward the Wives is not only essential to the narrative of the film, but it’s also a significant statement made by Miller himself. There are certain preconceptions that we bring with us to the theatre. As an audience well versed in the often-misogynistic tropes inherent in action films, we expect Splendid to be a “damsel in distress.” Miller, however, inverses our expectation, transforming her into an empowered survivor, and we’re both surprised by and proud of Splendid. There is recognition here that she lives up to Max and Furiosa’s endorsement, and that we should be reprimanded for not thinking more highly of her sooner. 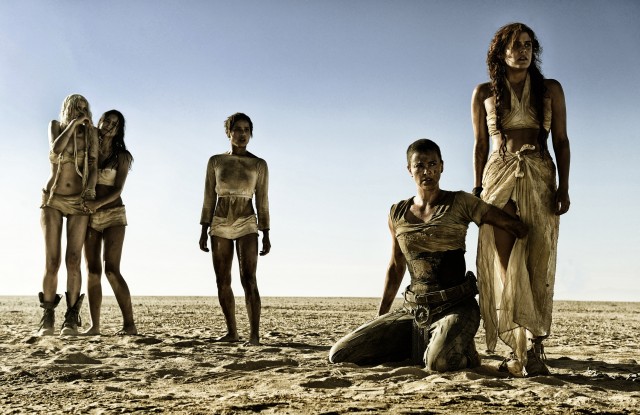 Fury Road is a feminist film because it’s not outright “feminist propaganda.” It uses gender and sex in a utilitarian, matter-of-fact manner, allowing its females to use their womanhood as a weapon against its universe’s established norms, but neither heroizing or demonizing that action. Fury Road radically allows its female characters to enact as much agency as its men. They are allowed to survive by whatever means are available to them.

Fury Road isn’t trying to say that Furiosa is better than Max or that female-led action films are the new status quo. Instead, George Miller’s fourth Mad Max film is a gentle reminder – amongst blood-lust and post-apocalyptic madness – that men and women are equal, and that we shouldn’t still have to make such a big f***ing deal about it.

TVO’s Saturday Night at the Movies said that “Sasha James is that really cool friend you hope likes the same movies you do because when that happens you are, if only for a moment, just as cool.” A film journalist and content producer, Sasha enjoys movies with murders and/or musical numbers. She lives in Toronto with the love of her life, her couch. Follow her on Twitter @ThatSashaJames.