By your powers combined... 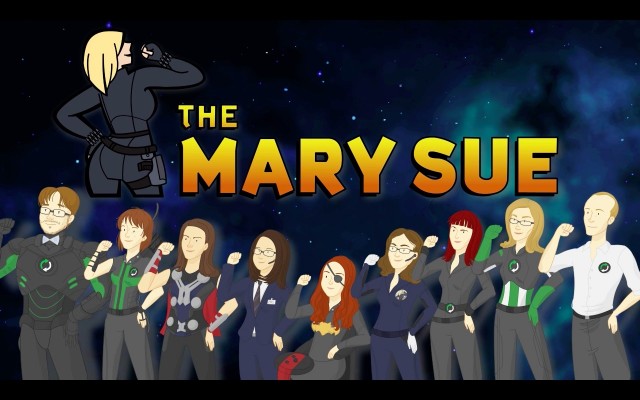 Geekosystem is teaming up with our sister site The Mary Sue effective tomorrow, Friday, June 13th. We’ll still be providing the same geeky content we always have, but by joining forces with our friends at The Mary Sue we’ll be able to bring you even greater articles, features, videos, podcasts, and more.

When Geekosystem was founded in 2010 it was with the intention to be a place for all geeks to gather. In 2011 former Geekosystem editor Susana Polo started The Mary Sue to showcase the voices of women in geek culture. We’ve both maintained small teams that have worked together closely for years. We already share a lot with The Mary Sue — including an office, pizzas, and many games of Dungeons & Dragons — so it makes sense that we combine our efforts for a better site than either of us have been able to create independently.

We think you’re going to love the new site because it’s going to be the best of Geekosystem and The Mary Sue in one site that is greater than the sum of its parts. We’ll still be focused on bringing you interesting science, space, and technology news and breaking it down for you in a fun and understandable way. The Mary Sue team will continue their great coverage of all the geeky entertainment news you care about, and there will also be some crossover. You can expect some new voices. The new site will keep with The Mary Sue’s focus of promoting diverse voices in geek culture, because it’s a concern we share.

Geekosystem will live on with The Geekosystem Podcast, which we’ll continue to produce weekly. It will be released on The Mary Sue and as part of the merger we’ll have some exciting announcements about that in the future as well. You can still expect to hear the four of us arguing over science, pop culture, and friendship every week.

The New Mary Sue will be a place to get all the geek news you’ll need, and also for stories and opinion you likely won’t see on most other sites. We’re moving over there as of tomorrow, and you’re certainly welcome to join us.

We’re excited about the merger, but we’re all really going to miss Geekosystem. Considering this is our final post we thought we’d include a fond farewell from the team that brings you Geekosystem before we move on to The Mary Sue.

I started writing for Geekosystem in 2012. I wasn’t familiar with the site before finding the job listing, but quickly fell in love with it even before I got the job. When I was a kid my parents would buy me these blank newspapers you could draw pictures and write on. I’d fill them with stories about superheroes, science, and space. The fact that that accurately describes my career now is incredible.

I’m proud that I’ve been a part of this site, and that as Senior Editor I’ve been able to help shape what the site has been. It’s without a doubt the greatest job I’ve ever had. That’s due in large part to the people I’ve had the pleasure of working with. Victoria, Dan, Carolyn, and Sam are the best thing going in geek journalism, and before them I got to work with Rollin Bishop and Ian Chant. They’ve both moved on, but were a joy to work with and learn from. Our lead developer Justin Oullette, also moving on, gave us all a great platform and I’ll miss working with him too.

Moving forward, I’ll certainly miss Geekosystem, but I’m also excited about what we’ll be doing with the new Mary Sue. It’s a chance to do something bigger, and I think the Geekosystem audience is going to like what we do there.

I really do love this site.

When I first started at Geekosystem a little over a year ago in 2013, I was the first female writer on staff they’d had in a while, as well as the first in a very long time (since Susana Polo, probably) with such an obviously feminine-sounding name that I could not be mistaken for a man. As such, I got some flack from commenters for the first couple of weeks, including one guy who very helpfully suggested that I “go back to the Mary Sue.”  We all had a good laugh at the time, but it’s weird—and exciting—to think that all of us here are Geekosystem are now doing just that.

Despite the occasional and inevitable Internet jerk, working here at Geekosystem has been an incredible privilege and I’ve enjoyed it immensely. Not only do I get to “make jokes about Batman for a living” (my go-to for explaining what I do to laymen), but I’ve also gotten to work with some of the best people ever. I’m so happy and grateful that I’ll get to continue writing about what I love alongside Glen, Dan, Carolyn, and Sam over at the Mary Sue.

You know how seeing a color in a certain context makes you associate it with that context forever, like seeing your school colors in the wild and remembering your college days? Geekosystem may be gone, but it’ll live on in my heart every time I see our special shade of neon green somewhere. So watch out, Gamora cosplayers. You are going to get cried on.

I’m excited to join The Mary Sue, so I’m going to try to channel any sadness over Geekosystem through pop culture references, which is kind of my job, anyway. Joining the staff at Geekosystem was a fresh start for me in a lot of ways, and along with working so closely with The Mary Sue, I found somewhere that I felt like I belonged. It has always reminded me of the end of Ocarina of Time, when Zelda says, “Now, go home, Link. Regain your lost time! Home… where you are supposed to be… the way you are supposed to be…”

I’m making up for lost geek-time, and this is where I am supposed to be. Every time I have found a story that I thought I could relate in an interesting way, that made me think of a funny headline, or that I just genuinely felt I needed to share with the world has been like a little gift. I greatly look forward to continuing that on The Mary Sue and focusing on topics I really have a lot to say about.

I’ve been reading Geekosystem since Glen joined the team in 2012, and I’m proud to be part of the new team with Glen, Victoria, Carolyn, and Sam driving it forward as we go into this merge with The Mary Sue, which is another team I’m grateful to be involved with. We’re mashing together like Station in Bill and Ted’s Bogus Journey (sorry for bringing that up) to form a better whole, and you can follow right along with us as we do. So while we don’t want to go, we’re regenerating, and everyone’s getting new kidneys! I hope you like the color.

Writing for Geekosystem has truly been a life-changing opportunity for me. I began my time here this January, and since then I’ve been humbled every day that, as a real-life job, I get to write about all the funny, weird, and awesome stuff I would have spent my time thinking about anyways. I’ve loved the chance to work with Dan, Victoria, Sam, and Glen (we make a pretty great team) but I’m beyond excited that our little group will now include the awe-inspiring ladies of The Mary Sue.

If you’re still reading then it’s safe to assume you’re a fairly regular Geekosystem visitor, in which case, thank you, and congratulations! You are the exact kind of reader our newborn super-blog was made for. We’ll see you there. In the meantime, friends, so long, and thanks for all the farts.

Hey all. Just wanted to pop in here real quick. I’m deep in the process of merging the two sites, making sure everything from Geekosystem is available and preserved in the new regime. I started here back in 2011, with big hopes and dreams for what the sites would eventually become. Over the years you’ve seen us grow and consolidate and grow again. This is definitely a big step towards the future, and I’m working to make sure it’s a smooth as possible. I’ll write a bunch more for you guys once it’s all said and done. Hold on to your butts.

Geekosystem! I’m going to miss this site and all of its readers kind of a lot. Weekend Editing for Geeko has made for one of the most rad years I could ever ask for as a writer. Where else would I have been able to spend my weekends making weird graphics of insect sex, or talking about NASA penis-sleeve sizes? Nowhere else, that’s where. To anyone who ever said something nice about one of my articles, you’re the best. To Glen, Victoria, Dan, and Carolyn, you’re the excellentest bunch of long-distance co-workers on the planet and I want to hug all of you in the face forever. It’s been a slice, Geeko. You’ve been great.

To oversimplify our feelings about our silly site, we’re excited about the future with The Mary Sue, but as for leaving Geekosystem behind honestly…