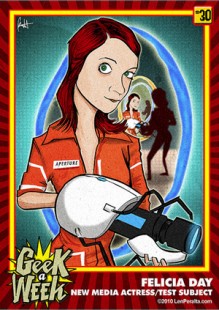 Las year, artist Len Peralta was working on a project in which he designed 52 trading cards featuring geek culture icons. These cards, dubbed Geek a Week, featured many mainstream and lesser-known geek icons, dressed up in other geek-related fashions, doubling the fangasm. I once thought Felicia Day and Portal only happened in my wistful dreams, yet Peralta made it somewhat closer to reality, dressing her up as Chell, Portal’s protagonist who is doomed to android hell. And look, because of the portal effect, there’s infinite Felicia Day, which is a pretty good amount of that. There’s also Weird Al, Penn & Teller, Jonathan Coulton, and Veronica Belmont dressed up as a blue Kratos (for some reason), and many other icons you probably follow on Twitter.

ThinkGeek has the exclusive rights at printing and selling the cards, so make sure to head over there and check them out. The sets are currently selling in packs of 8, which some may realize doesn’t evenly divide into 52, and no, it doesn’t seem the ThinkGeek product listing makes mention of what that last pack will contain. For now, there’s only one way to find out!