Geek but make it fabulous. 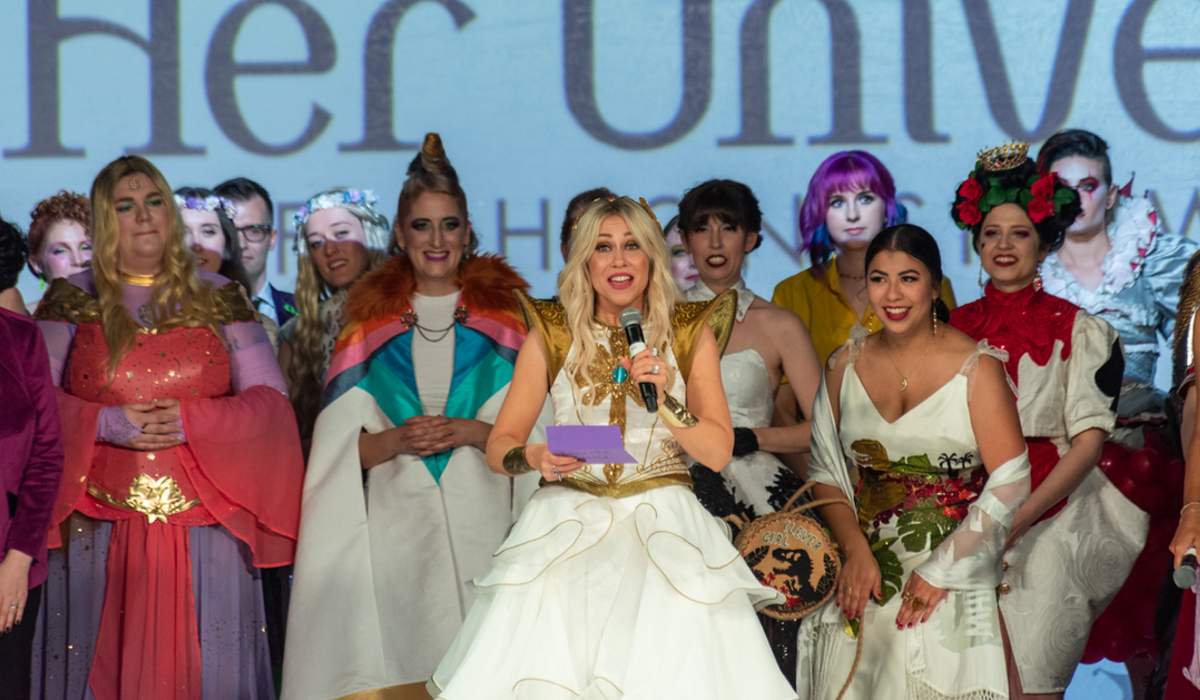 For more of our coverage directly from the floor of San Diego Comic-Con 2019, look here!

Transformations, sequins, and everyone’s favorite fandoms strutted their stuff on the runway at the Her Universe Fashion Show at San Diego Comic-Con 2019. The fashion show, now in its sixth year, celebrates the best of original “geek couture” designs from twenty-four designers competing to design a line for fashion brand Her Universe. Hosted by Her Universe founder Ashley Eckstein and cohosted by her friend, actress Tiffany Smith, the show was a celebration of the power of fashion, and also the power of friendship and connection.

Eckstein and Her Universe partnered with Netflix’s She-Ra and the Princesses of Power to bring the fashion show to Comic-Con. She opened the show in a gown that transformed from Adora’s red outfit to her white She-Ra gear. Eckstein announced at the show that she would be voicing a character in the upcoming season of the series. While the character is being kept under wraps, Eckstein, a lifelong She-Ra fan, was clearly thrilled to be part of the show’s world and celebrating it on the stage.

Other surprises included the announcement of a line for Hot Topic and Her Universe celebrating 50 years of Disney’s The Haunted Mansion ride, and the announcement that the winners of this year’s competition will be helping design a Wonder Woman 1984 collection for release next year.

Another moving part of the evening was Eckstein shining some light on the subject of mental illness awareness via both a new shirt, proceeds from which will be donated to helping fund children’s mental health studies, and by delivering a speech that was deeply inspiring.

In an interview given a week before the show, Eckstein said that, on her book tour last year, “I was meeting fans all over the nation and … they opened up to me about their mental health and living with depression or living with anxiety. I’ve heard story after story of people that have actually considered suicide and they shared with me how my character Ahsoka saved them or how Star Wars saved them or how our charity has saved them. And it was really eye opening.”

Her Universe has started doing weekly Mental Health Monday blog posts, in which Eckstein encourages fans to share their stories and get the help they deserve. Given Eckstein’s appeal to young women and men across the globe, encouraging fans to fight the stigma of mental illness is deeply important. Ahsoka Tano, Eckstein’s Star Wars character, is an inspiring figure, and Eckstein is channeling her character to fight the stigma of mental illness.

“Most people have symptoms young, especially young girls and young boys, and it goes undiagnosed. So it’s definitely important to have early early intervention. And so it’s hard to talk about mental health for all ages not just kids and teens,” Eckstein said. Given her appeal to younger Star Wars, fans as well as those of us who are young at heart, her discussion of early diagnosis and treatment could help children who’s illnesses manifest by age 14 not face the fight alone.

The show celebrated the power of togetherness, but also the power of fashion. “When I design an outfit for her universe, it’s almost like your daily armor,” Eckstein said, and the 24 outfits that walked the catwalk definitely were putting their best fandom face forward. From Star Wars gowns to My Hero Academia dresses, these designers brought their best looks to shine on the runway. 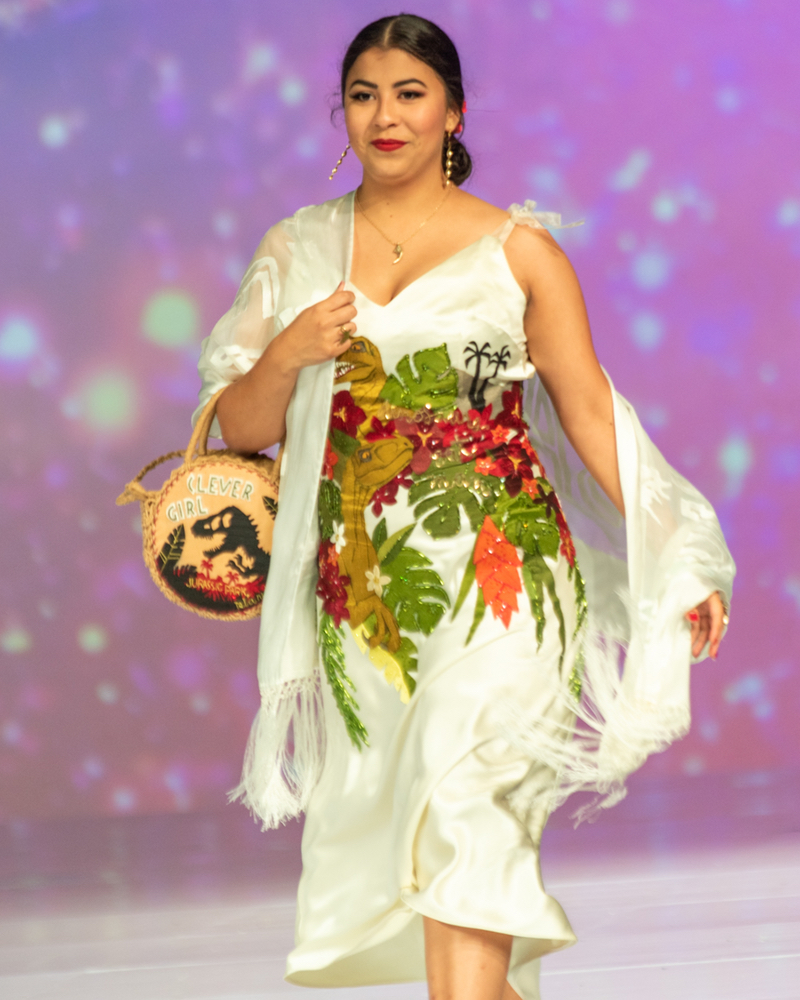 The Judge’s Choice winner was Adria Renee with her “Destination: Isla Nublar” dress. She wanted to bring the romance of travel to a rather rough and tumble park. Her shawl was a recreation of Jurassic Park’s “when dinosaurs ruled the Earth” banner, and she delighted audiences by recreating the famous “guy running away from pterodactyls with two margaritas” moment from Jurassic World before strutting her stuff down the runway. This is her fourth appearance in the Her Universe show. 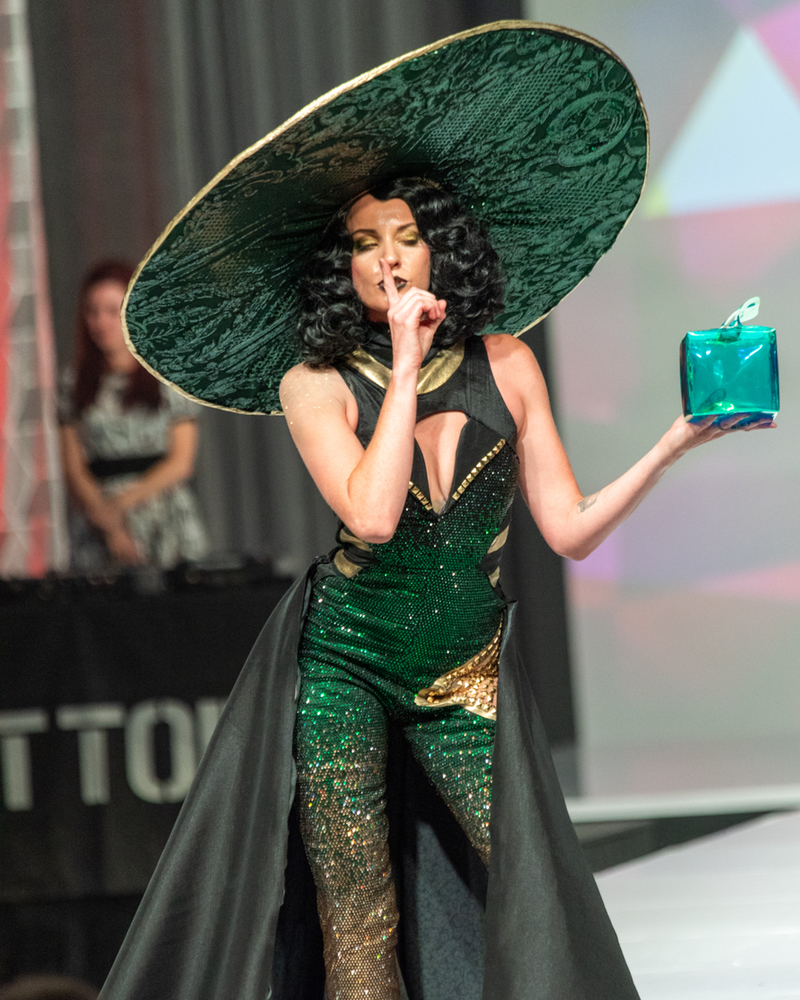 The Audience’s Choice winner was Sarah Hambly, who brought some Loki love to the runway. Her model channeled their inner trickster god with a glittering bodysuit, dramatic jacket, and a truly amazing hat. Hambly also participated in the show for four years prior.

Once again, the evening was a delight and a positive celebration of power: power of fashion, power of friendship, and power of fandom. We can’t wait to see what next year has in store for Her Universe. 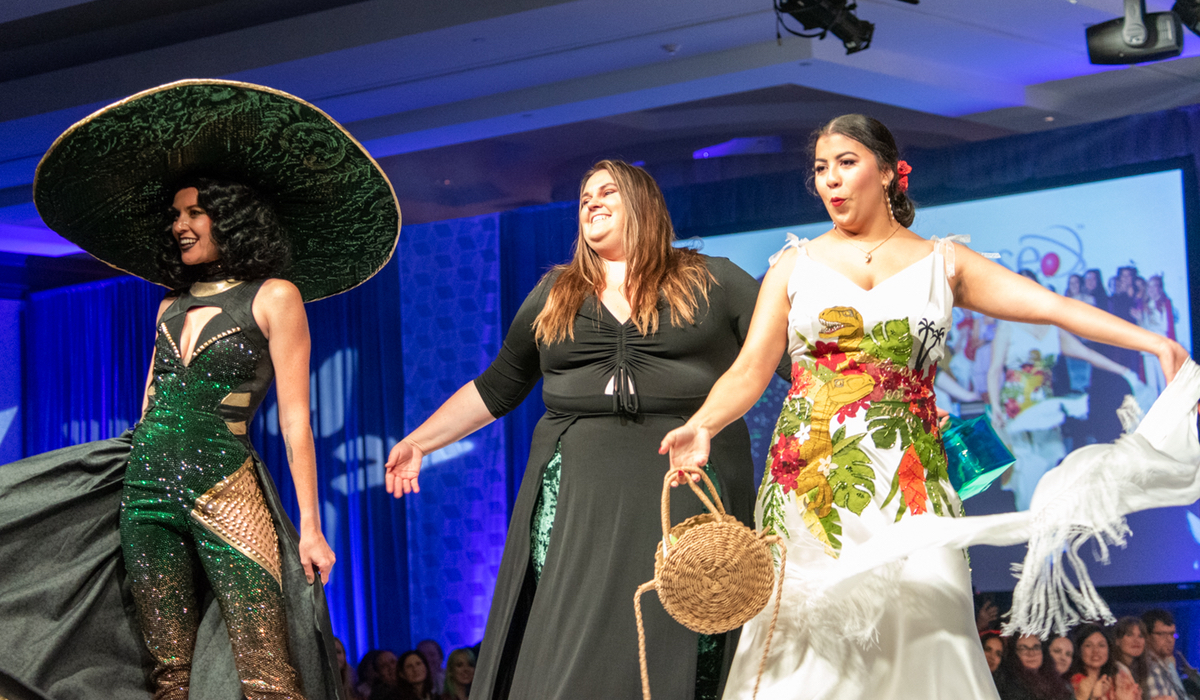