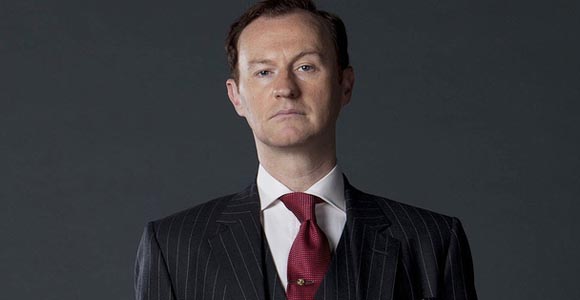 Wonder no more – Mark Gatiss‘ Game of Thrones character is…

“Who?” is what I said to myself upon reading the name. It certainly wasn’t one that left an impression but the character makes his first appearance in the fifth book of George R.R. Martin’s series, A Dance with Dragons. WinterIsComing.net gleaned the information from Gatiss’ CV.

When Entertainment Weekly broke the news of Gatiss’ casting but didn’t mention the specific role, we assumed it was secret for a reason. Our own Rebecca and others thought this could mean the actor was going to play Merrett Frey. Tycho Nestoris is a representative of the Iron Bank of Braavos, a group who may just collectively sit on the Iron Throne by the end of the series thanks to everyone owe them so much money.

But I digress. In the novel, Tycho heads to the Wall in order to collect a large sum from new visitor, King Stannis. He winds up negotiating with Jon Snow instead before continuing on to find Stannis. In the television series, we’re still a bit far off from that point in the story but we already know the creators have been altering the progress to suit the needs of their pacing.

There’s been a lot of confusing Game of Thrones casting information out there recently but I’m glad to know who Gatiss is playing, even if it’s not as excited as I thought. What do you think of him for this particular role?