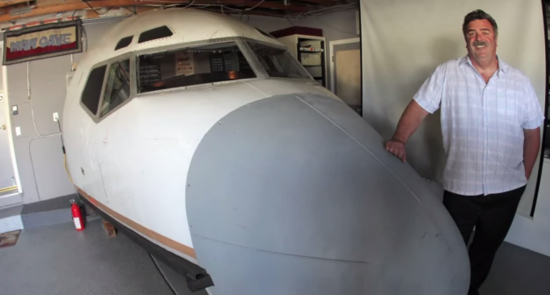 For most people who are into flight simulators, the desktop computer variety are usually enough to get the job done. If you’re more ambitious though, you might build a full-sized flight simulator in your garage out of the actual cockpit of a real 1969 Boeing 737. James Price did, and it only took him a little more than a decade. Who doesn’t have a decade to spare, right?

Price has been working at his hobby since 2000, or “since the beginning of the millenium” if a decade doesn’t seem epic enough for you. On top of getting his hands on a real cockpit and moving that sucker into his garage, Price took a hands-on approach to the software side too, writing all the simulation software himself. Being a private pilot and air traffic controller probably helped.

Of course, what good is all that if you can’t use the plane’s actual innards to play? Price took care of that too; Around 90% of the gauges, switches, knobs, widgets, gizmos, doohickeys, thingamajigs, whatsits, and whosits actually function. “I like the technical aspect of it,” Price says, “Not only flying the simulator, but building the systems, programing the software, making it all work.” Clearly he must, in order to embark on such a sophisticated undertaking. Too bad it’s not a mech simulator instead. That’s something I could really get behind.