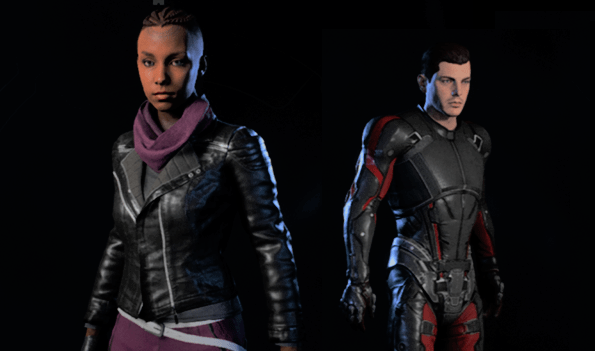 For RPG aficionados like myself, pulling up that character creation screen for the first time may be the most highly anticipated part of playing a new game. Though some of us like to create digital avatars that reflect our real-life selves as closely as possible, many of us use RPGs as an opportunity to act as characters that are completely different from us. Most of us fall somewhere in the middle, playing characters that are like us in some ways and unlike us in other ways. However, I don’t have the option to faithfully recreate myself in a game if I wanted to. My ability to digitally translate myself is taken away by that very first character creation option: Gender.

While I’ve been gaming since I was a child, I’ve been out as non-binary for only a few years; thanks in large part to lack of representation in the media, I didn’t realize being non-binary was even an option until recently. But when I started thinking that “non-binary” best explained my confusing feelings about myself and my body, my habit of always creating female protagonists made me take pause. My Commander Shepard, my Sole Survivor, my Dovahkiin—all women, without exception. Did that mean that I was deluding myself, that I wasn’t “really” trans? Was I actually just a confused butch lady?

But here’s the thing: my Commander Shepard and my Sole Survivor are black, while I’m white; my Dovahkiin is a cat-person, while I’m (as previously mentioned) 100% human. My characters already deviate from me in key ways—not even mentioning their fighting abilities far beyond what I have—and it doesn’t mean anything other than that I love Alfre Woodard’s character in Star Trek: First Contact and I also love cats. Furthermore, my brother, a cis man, also always creates female protagonists; if that doesn’t call his gender identity into question, it shouldn’t call mine into question either.

Besides simple habit, there’s another reason why I always create female protagonists, even now that I’m more secure in my non-binary identity. The media landscape is lousy with male protagonists—why would I want to experience yet another story about a gruff male space soldier saving the galaxy, or about a taciturn male warrior who’s the Chosen One? Been there, seen that over and over again. In Mass Effect: Andromeda, if I were to play as the Ryder brother, then the Ryder sister becomes a pretty typical damsel in distress. However, if I play as the Ryder sister then the roles are reversed. The physically smaller, nerdy sister is the one saving her military-trained brother; this story is much more interesting because it’s one I don’t see nearly as often.

Of course, if female protagonists are uncommon, then non-binary protagonists are even rarer. I can create an avatar that looks pretty much like me, but they will always be misgendered in dialog with NPCs and called either “she” or “he.” I get misgendered almost constantly in the real world; I’d love the ability to escape that drudgery in my hobby of choice, and I know that there are plenty of other non-binary gamers who feel the same. Further, the option to play as a non-binary protagonist would open new avenues for male and female gamers too. The stories they could experience would be fresh, new, and interesting, and, hopefully, help them gain a little bit of insight into what it’s like to be outside the gender binary. And having non-binary representation might help people who were like me a few years ago: confused and upset about something in themselves, but unsure how to articulate it.

I’m not a game designer, so I don’t know exactly what incorporating a non-binary character option into a game would require. However, I can see hints of what it might look like in some games already; in Fallout 4, any character can wear any article of clothing, regardless of “femininity” or “masculinity,” and Mass Effect: Andromeda recently updated their character creator so hairstyle is no longer restricted by gender. In the future, I hope game developers incorporate dialog that uses “they” instead of just “he” or “she” as well. Perhaps they could also introduce a third body archetype besides “male” and “female,” one that largely omits the secondary sex characteristics normally used to differentiate gender in characters.

Knowing what I know about the gaming community (hell, about society in general), I’m sure there will be lots of people who will think these changes will somehow degrade the game. But, perhaps, these people will eventually realize that providing more options for self-expression in video games benefits everyone.

Author Bio: Nat Morse-Noland is a long-time gamer and all-around geek currently residing in Chicago. They put their English degree to good use by over-analyzing video game and movie plots.