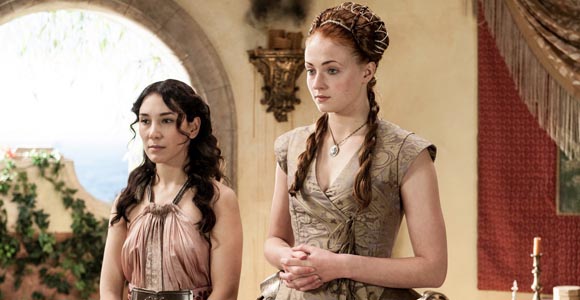 Sibel Kekilli plays Shae on HBO’s Game of Thrones. A character who, much like many of the women in Westeros, is in a difficult position. Working as a servant for your boyfriend’s wife doesn’t sound like fun but at least you weren’t a guest at the Red Wedding.

Speaking at a press junket, and reporter by Reveal.Co.Uk, the actress delved into her characters place in the hit series.

“I don’t think Shae is really a girly girl, I think she is a fighter and she’s acting like a man,” she said. “She feels responsible for girls like Sansa, like she’s a little sister and she wants to rescue her from the bad world around her. I love that about Shae. I think I’m a fighter too – I hope I’m not just a girly girl. And, like Shae, I’m patient and loyal.”

Kekilli feels Shae would actually go so far as to kill for Sansa and believes she’s genuinely in love with Tyrion, not just sticking around because he’s rich.

“The greatest challenge for me was to keep up with Peter Dinklage and all the actors,” she said. “I love to work with Peter. There are two sorts of actor. One is always there just acting for themselves and they don’t listen to you or really react when you act, but Peter is one of those rare actors. He isn’t vain. He acts with his eyes. It’s like ping pong with a ball, playing back and forth between us. He really listens to me and he really reacts when I act. I think that’s the secret of our good chemistry.”

The actress said she doesn’t refer to the books for information on her character because book Shae and TV Shae are a bit different but as a reader of the books I’m definitely anticipating her role in Season 4. Kekilli was also asked about the Red Wedding, this was her hilarious response [no spoilers], “I really just thought I’d wake up and it would be a dream like in Dallas. I really thought, ‘Oh my God!’ I had read it in the script but still said, ‘No, no, they are not doing that! The fans love those characters.’ I was really shocked, even when I first read the script.”