Game of Thrones Keeps Casting New Characters, One Of Them Is Not Arianne Martell 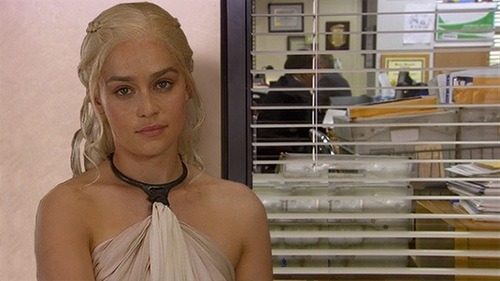 But one of them is being played by a fan-favorite actor from Lost, so that’s cool.

Buried in a casting announcement about the Dalton Trumbo biopic Trumbo, The Hollywood Reporter has announced that actor Adewale Akinnuoye-Agbaje (Thor: The Dark World, Oz), best known as Mr. Eko from Lost, will be joining season five of Game of Thrones, reportedly as a mystery character named “Malko.” If you’re scratching your head, you’re not alone–like Burn Gorman’s Karl Tanner, Malko isn’t a character from the books. I’d guess that he’s a part of either the Dorne or Meereen storylines, because they’re pretty much the only locations in Westeros that aren’t 99% white, but I’d be happy to be proven wrong.

Via WinterIsComing.net, two other small roles have been cast. One is Septa Unella, who’s involved in Cersei’s plotline; she’ll be played by Hannah Waddingham. The second is Clea, “a young prostitute who [will] have a conversation would Tyrion,” likely to be played by Welsh actress Gwyneth Keyworth. Misfits fans will recognize her as Marnie, the pregnant woman who falls for Nathan in the season two finale. Her childbirth scene had a decidedly Misfits spin. As WiC points out, Thrones actors Michelle Fairley, Iwan Rheon, Josef Altin, and Nathalie Emmanuel were all in Misfits as well. It’s like the Arrow–Spartacus connection all over again.

So what’s with me getting snarky about Arianne Martell in the headline? Here’s the tl;dr of what’s up with that, for those not in the know–Arianne Martell, in the books, is the eldest child and only daughter of Doran Martell, being played by Alexander Siddig. She’s a fairly big deal in the Dorne plotline, which we already know HBO is mixing up because otherwise Jaime wouldn’t be there. Another big part of the Dorne storyline is the way Dorne doesn’t follow primogeniture—basically, it’s the rule there that the eldest child inherits, not the eldest son. As that eldest child, all of Dorne’s messy inheritance drama (and there’s a fair bit of it) naturally focuses on Arianne. Except the official casting announcement for Arianne’s brother Trystane has him as the heir, leaving many fans to believe that Arianne has been cut from the show. Which people are upset about, because hey, an awesome female-friendly (by Westerosi standards, anyway) culture… not being so awesome and female-friendly.