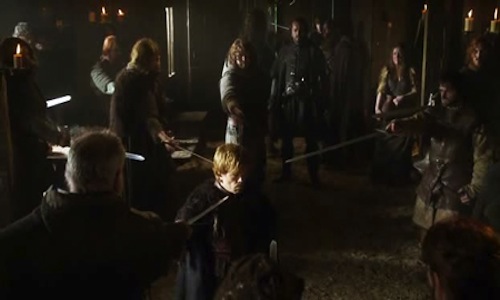 Game of Thrones: you win, or you die, or you talk about impending weather. Another week of not learning anyone’s name!

In the North of Convenient Amnesia, Bran is dreaming about following a crow. To make it clear that this is a dream, the camera pointedly focuses on Bran’s broken, enfeebled, shattered, useless legs. You’re a dick, camera. Incidentally, crows are a common symbol for thievery, metamorphosis, transitions and change, and death. The three eyes the crow has are a symbol for Blinky.

Tyrion pays Robb a visit to tell him what’s up, but fails to mention the ludicrous, 90s-esque extra b in his name. I choose to believe he connotes it in that trademark smirk, though. Tyrion questions Bran on his amnesia, then gives him a design for a handicapable saddle. Aww, I like Tyrion when he’s not contracting syphilis. Oh, I spoke too soon. Tyrion leaves for his favorite brothel, but not before insulting a few of the locals. Peter Dinklage is really so handsome. No snark.

In the Land of Winter Is Already Here, Jon Snow gets his very own bumbling Samwise Gamgee to take under his wing. And he’s even called Sam — now that’s servicey for your friendly neighborhood recapper.

Viserys takes the insubordination fairly well, as in the next scene he’s got Doreah about to ride stick in a hot tub. Viserys is totally the frat boy of Westeros. Fact: I once dated a guy who had a hot tub. He also had a shirt proclaiming to the uninformed that he had a hot tub. Important things to know about your recapper.

As Dick Cheney at This Recording points out (…just click), this scene is full of sexiness to calm the audience and reassure them they’re still watching Game of Thrones while feeding them some background myth. Viserys expounds on the relation of his bloodline to dragons (they rode them), but Doreah doesn’t seem to be listening so much as getting really turned on. Dragons: the number one aphrodisiac in Westeros, apparently. Viserys gets tired of all the mythiness and asks, roughly, what he bought her for. She hops on and gets to business. That looks like a yeast infection waiting to happen, young lady.

In the next scene between Sansa and her nurse, Sansa is feeling the pressure of carrying baby boys for the realm, worrying that everyone will hate her if she doesn’t give Joffrey an heir. The nurse says, “No one could ever hate you,” and I deem that to be a meta-chastisement to the haters.

Oh good, another scene about the financial debt of the kingdom. Ned seems to be under the impression that turning away thousands of tournament tourists from King’s Landing is an excellent PR move. The shadowy figures dissent, predictably enough. Weren’t they just deciding whether to have this tournament last episode? Far be it from me to shadowy figure, but isn’t the funding and schedule for the tournament decided somewhat prior to a few weeks before the event? Again, not a shadowy figure in control of the kingdom, but that seems like a scheduling issue. Money, Treasury, Ned Stark’s pouty face. Moving forward.

Ned decides to get CSI about Jon Arryn and asks some questions of Old Shadowy Figure. OSF leads him to the Restricted Section, where Jon Arryn checked out a tome that even OSF thinks is “ponderous.” Since I’m assuming OSF reads books on the historical intricacies of every past king’s favorite breakfast food in his spare time, that is truly a statement. OSF also tells Ned that Arryn’s last words were “The seed is strong.” I’m thinking that someone had just met Khal Drogo!

Ned comes up to Arya balancing on the stairs as part of her exercises. This reminds me of the part in Mystery Men where the Sphinx makes Ben Stiller balance a tack hammer on his head so he “will fend off foes with a balanced attack.” “But why am I wearing this watermelon on my head?” “I don’t recall asking you to do that.” Memories. Anyway, Arya’s super disappointed when Ned tells her that she’ll bear lots of babies one day. “That’s not me,” she says, and stalks away. She and Cersei, who gets precious little screen time this episode, are proving to be the most dynamic characters on the show.

Ned Stark seems to find bastards wherever he looks, and finds Jon Arryn’s in particular, who is busy forging swords and acting very sullen about the whole enterprise.

Jamie Lannister is chafing because he thinks King Robert purposely puts him on duty when he has prostitutes pay him a visit. I wouldn’t make it all about you, Jamie. I think this is probably an hourly occurrence. Worth a mention: Jamie’s morals are very pick-your-fave. The door opens and a few back-door-Sallys (per Catelyn Stark) trickle out. I hear something from King Robert that sounds like “I’ll make you smell my blackberry jam!” and that is what I choose to believe he says.

Jon Snow protects Samwise from the playground bullies with some rope and his runt Direwolf. (Who is all white and thus has the purest coat of all the Direwolves, by the way. SYMBOLISM.) Jon Snow and Samwise have a heart-to-heart about being virgins. Jon says he couldn’t get it on with Ros (who’s getting a lot of shout-outs this episode!) because he was afraid he’d knock her up and perpetuate the bastard Snow name. I refuse to believe Westeros does not have condoms, lambskin though they may be. It will be a terrible thing for this show’s ratings if those curls and that pout don’t get naked at some point.

The knight who’s been training them and has been particularly hard on Samwise steps in and lets them know he’s a straight up cannibal. All the old men need to relax on this show. Always telling people winter is coming and that they’re going to die like flies. Someone needs a hot tub.

In Xena Part Deux’s chambers, Viserys is invited to dinner. He’s been quite the restless Targaryen, not being able to command the Dothraki and forced to lay in wait for an army that doesn’t respect him. He tries to take it out on Dany, but she’s sick of his shit and smacks him one. Then she delivers the line of the episode, in my opinion: “The next time you lay a hand on me will be the last time you have hands.” I told you, Viserys. You don’t give the abused powers, because it usually ends badly for the abuser. For now, his shocked face is the crowning moment of Episode 4. 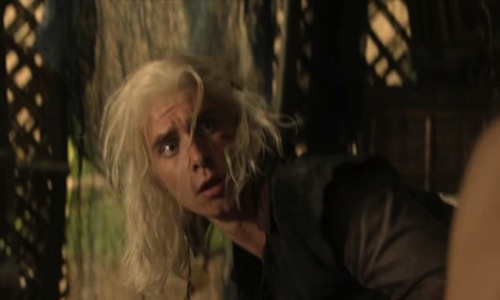 Next: at the Tournament of Empty Coffers! Sansa watches in horror as one of the jousters allows his cartoon blood to escape his body. Man, jousting is all fun and games til someone gets a spike through his neck. Carcetti (no, I don’t recognize that he has another name?) echoes what we’re all thinking as he smarms, “Wasn’t what you were expecting, eh?” Then he tells Sansa a pretty macabre story about how the Hound got all those scars on his face (hint: his older brother shoved him into a fire). Then, after telling her a story she didn’t want to hear in the first place, he warns her not to tell anyone else or she’ll be dispatched with. Carcetti is the worst storyteller ever.

Cersei shares the second most awesome scene of the episode with Ned as she meets him in the back rooms of the palace and they subtext subtext subtext. Basically, both of them know everything about each other. The interaction is coy and barbed — more scenes between these two, please. And if each scene could last more than a minute before transitions, that’d be great, too. It’s enough to give a girl whiplash.

Tyrion enters a local inn and wants a room for once, instead of his usual pig pen. He spots Catelyn in “disguise” and greets her in typical smirky Lannister fashion. Catelyn gets all “Come ye gods and unsex me here” and calls down favors from everyone in the inn’s tavern to apprehend Tyrion for trying to kill her son. Tyrion’s totally wishing he spent an extra day with Ros right about now.

Next week: How will Tyrion talk his way out of this one? How else can we humiliate Viserys? Will Doreah get that yeast infection? Only time will tell!

ETA 1:35 P.M: Ned found King Robert’s bastard son, not Jon Arryn’s. Although I’m sure Arryn’s got one poking around King’s Landing, too.