Game of Thrones Novice Recap: You Win or You Die 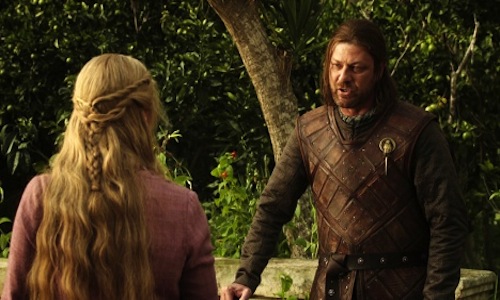 Welcome to our Game of Thrones recap from a viewer who hasn’t read the books. Enjoy the love and snark.

Herewith this week’s Game of Thrones, which gets as literal about the whole enterprise as one could have hoped. Smirking and scheming abound!

Jamie’s dad has chosen this particular moment to both gut an animal and lecture his son. He tells Jamie that he cares too much what people think of him. Jamie responds, “I could care less,” and the entire internet throws a shoe at him for a) poor grammar and b) poor anachronistic grammar. In a world where people actually say, “In the game of thrones, you win or you die”, you’d think Jamie could have come up with a better way to express his apathy.

Jamie also says he didn’t kill Ned in King’s Landing because it wouldn’t have been “clean.” I can’t help but think that the choice of words, given the entrails-heavy setting, is deliberate. His father gets super cheery on him, telling him all the Lannisters will eventually roll in the dirt, but the family name lives on. So they have to free Tyrion, or something.

The King’s Landing of Lol, No. Ned is blundering his way around, as usual, and decides to — wait for it — confront Cersei with everything he knows about her. For those of you also slapping your head, the internet is here for you with Stupid Ned Memes. Go, and be grateful. Cersei literally pauses for one second, then owns it. She’s even smizing a little. Fierce bitch. She gets very Wuthering Heights on Ned as she tells him Jamie and her were meant to be together. She does throw in a little nod to the fact she did once love Robert — but he loved Ned’s sister more than anyone else. She’s being pretty logical, all things considered; but I’m willing to admit she may just seem that way by comparison to every other nudnik in Westeros.

Ned tells her he’s going to tattletale to Robert and overplays it by telling her to run. She is amused, then tells him he should have taken the throne when he had the chance. YOU WIN OR YOU DIE THE GoT, NED.

After the exuberance of that scene must naturally come the pitfall of the next, so let’s just get this over with: there’s a five minute scene of Carcetti training Ros in his brothel to finger another prostitute. He gets very Patrick Bateman about the whole thing, so much so that I laughed out loud when he told Ros to “play with her ass.” It’s ridiculous and gratuitous, but Carcetti is doing some exposition about his history with Catelyn, so of course GoT would see fit to backdrop this important character development with some lesbian sex. Whatever, GoT. I’m just mad I had to rewind to catch his quiet Irish drift over all the hammy moaning. Anyway. Carcetti loved Catelyn, and then lost her to Ned’s brother, then to Ned. He realized he couldn’t win through force, so he had to win through fucking. WE GET IT, SHOW.

Next! Theon pays a visit to the new ruffian girl to make a new Ros out of her. She quickly becomes my new favorite character, rolling her eyes when Theon tells her to call him “lord”. She keeps Rumpelstilsken-ing up a pallet for herself, unperturbed, until a monk comes and shoos Theon’s penis away from her. She makes some overtures about the scary creatures north of the wall, and I continue to ignore everything until we finally get some payoff on the very first scene of this series.

Robert’s been injured and he’s still giving Joffrey shit on his deathbed. Ned comes in and Robert asks to be left alone with him, which makes Cersei’s eyes bug a little. But she goes, and Ned seems to have other things on his mind than telling Robert all his sons are a lie. (But, really? No one has ever pointed out that they’re all blond??) Robert draws up a will, being mindful of the audience’s attention span and skipping everyone’s proper titles. Ned plays it tricky for the first time in his presumably now-culminated life and alters his words from “rightful son Joffrey” to “rightful heir.”

Khal Drogo actually gets to talk a little bit in this episode, but none of what he’s saying is all that palatable. He does all right in this first scene with Dany, teaching her Dothraki words. She’s trying to get him to be her army, now, but he’s not interested in being her tool unless it’s in bed, so it seems. Her golden hopes are also dashed by Ser Jorah, who tells her to relax. But she’s got a taste for game of throning now and wants to win — instead almost dying when she falls for the old “poison wine barrel” trick. Has this chick never seen Snow White? Ser Jorah saves her from the assassination attempt, which was supposed to have been called off, as Robert had a change of heart on his deathbed. Westeros could really do with some email, folks.

The old dude in the North of Winter is Totally Here Already is giving the prospective troops a Buffy-esque pep talk before their graduation. Samwise tells Frodo he’ll accompany him to find his uncle Bilbo after Frodo is made Ranger. Only, Jon gets made a personal assistant steward instead! Any graciousness Jon showed Sam about stewardship before that announcement gets thrown out the window as Jon tantrums around, threatening to quit like I do every weekend at my bartending gig. It’s just as high-pitched and just as ineffectual when Jon does it. Sam shows some true Slytherin potential and tells Jon to stick around and get the inside scoop on Commander Guy. Then Sam says he wants to be a wizard and I look suspiciously around to make sure no one is snooping on my thoughts.

Some Brunette Guy approaches Ned and thrones at him for a while about how he’d make a good king. Ned is set on Stannis being king though, and I look blankly at the television until Some Brunette Guy tells me that is his older brother. Thanks, Some-Brunette-Guy-Now-Renly! You have truly earned your name in these halls.

Carcetti shows up to smarm at Ned. Ned immediately trusts him with everything that’s going on, because of course he does. Carcetti is very wise this episode, telling some people to play with others’ asses and other people that “we only make peace with our enemies.” So true! Both counts! But Ned wants to die and not win the game of thrones, so he does not accept Carcetti’s plan to make Joffrey king. So Carcetti offers to use his position as treasurer to secure Ned’s plan to power. Spoiler alert he does the opposite of this. It’s Westeros…no one lives forever.

Jon apparently gets to go on Ranger missions even though he’s a Steward. He exits the Wall fort with like four other dudes, who are all horseless. That seems…unwise. Sam and Jon approach the Shrine of the Bleeding Eyes, which looks like a :D face, and kneel before it. A crusty old dude tells them they’ve risen as men. Haha, okay, gramps. That guy is totally angling for his SAG card.

Khal Drogo is Not Pleased that someone tried to kill the “moon of his life” and storms around demonstrating said displeasure. He’s totally into storming the poison waters so that his son can have the throne (note that he does not say Dany should have the throne) and proclaims for a bit on what he’s going to do to all of Westeros. Hint: it involves raping all the women! Khal Drogo might need anger management classes, you guys! Let’s all look out for Khal Drogo during this trying time. Dany is apparently turned on by all this, which to me is one of the sadder signs of her Stockholm Syndrome, here. Although her face could be apprehensive, it’s unclear with Emilia Clarke’s passivity. Anyway, she’s wearing her excited face, which also passes for boredom, happiness, sadness, fright, &c.

Robert has died. So long, Robert, it has been nice Game of Throning with you. Cersei overlooked one of the options there, which is that you win AND you die. R.I.P. Robert, you are with the prostitutes in heaven now.

You might get whiplash from how fast Cersei moves to crown Joffrey as the next king. Bold, C. Bold. Ned is totally up in her grill about it, waving Robert’s will like it’s a shield. She tears that up pretty quick, and I think no one’s surprised on that front. Ned commands some people to seize Cersei! Cersei commands some people to seize Ned! Some people turn on some other people! It is the least clear ending ever, until Carcetti grabs Ned by the throat with his knife and it’s apparent that he pulled out his”Fuck them over” card. CREDITS.

But what about Bran? Is he still paralyzed? Missed you, three-eyed crow. Is Tyrion out wandering the Eyrie horseless? Was Robb off in search of more b’s? When will Westeros hit the industrial age and get the internet?? These ravens are really bringing down some people’s grooves!

In all seriousness, the action has been steadily climbing since eppy one, and we’re finally getting some of the fruits of that labor. (No one’s getting more of them than that dark haired prostitute, amirite?) I enjoyed the extra Cersei time, although bitch is crazy. She needs Jamie to come back and calm her down, stat. Dany’s crazy as a Targaryen is wont to be, too, but apparently the fandom just loves her. I still don’t get that dynamic, and probably never will. Everyone played the game of thrones this episode, and only Ned really mucked things up. That is no surprise. He is Ned. See you next week!