GoT News Roundup: Arya is “Not Arya Anymore,” Jon Snow Continues To Know Nothing

Probably no hugs for either of them, either. 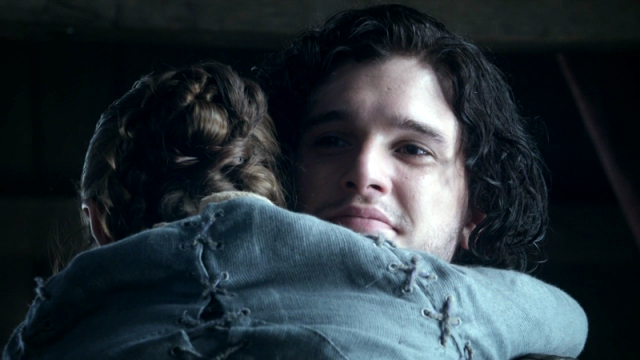 Season 4 is over, but Winter is always coming for Game of Thrones fans. Both Maisie Williams (Arya) and Kit Harrington (Jon now) were recently interviewed about what they think next season will bring for their characters once they start filming in July, and they’re pretty sure it’s going to be nothing good. Warning, spoilers for the series so far.

In an interview with The Daily Beast, actor Maisie Williams talked about the intense psychological trauma Arya’s been going through on her own and how it’s warped her as a person. On the subject of her leaving the Hound to die at the end of the season, she says:

It’s the same Arya we’ve seen all year, she’s just putting everything she’s learned into practice now. When she picks up the silver, it’s not a spiteful thing—she’s just doing what The Hound taught her, since he was the one who said, “Dead men don’t need silver.” And in her eyes, she thinks he’s dead. But the big change for Arya happened in Episode 1 when she kills Polliver, and people have loved their relationship this season, but he’s also been telling her constantly how she doesn’t know how to fight and reminding her that everyone’s dead. They seem like funny scenes when you turn a blind eye to the fact that this is a little girl who’s trying to stay alive in this very unforgiving world, so having someone tell you these things all the time isn’t helpful. She’s not Arya anymore; she’s not the girl who everyone thinks she is and likes to believe she is. If anyone is in that environment long enough, they’re not going to have their head screwed on perfectly.

Bolding above is ours. Don’t you just love it when an actor really gets the person they’re adapting? And Maisie definitely gets Arya, because she seems cautiously hopeful about what Braavos will bring her character in the future:

In that moment when she’s in the back of the ship sailing away, and looking out at Westeros and her previous life drifting away from her, and then she turns around, I feel it’s a huge breath of fresh air for her. She can go to a place where nobody knows who she is.

Winter is Coming has more about how Maisie sees Arya’s future unfolding, so go and check that out.

Speaking of nobody knowing things, however, let’s turn to our favorite of Ned Stark’s bastards, Jon Snow. Kit Harrington talked to Access Hollywood recently about the final episode of this season and whether or not he’s truly sided with Stannis Baratheon:

Of course, that’s probably not going to work out once Melisandre gets ahold of him — and judging from that scene by the fire, you know she’s going to. “She’s, for some reason, obsessed with bastard-born children – high-born children — and Jon doesn’t come any higher born or bastard, so I think there’s going to be a relationship there,” he added.

But as much as Harrington would love to speculated about Melisandre, there’s one thing he refuses to question: his character’s parentage. “I genuinely don’t want to know, whoever it is,” he told Vulture.

His logic? Because he wants to find out when Jon finds out, and he truly believes that Jon is meant to find out about his mother before he’s unceremoniously murdered like so many honorable Starks. Ohhh, my sweet summer child. Bless your adorable scruffy heart.