Hate Your Job? New Gallup Survey Says So Does Almost Everyone Else

Knowing you're not alone in hating your job probably won't hate your job any less, but maybe it will brighten your miserable day? 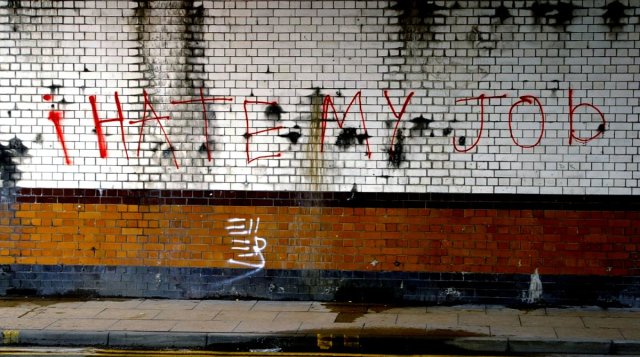 I really love my job here at Geekosystem, but it turns out I’m in the minority. According to a Gallup survey only 30% of the 100 million Americans with a full-time job are “actively engaged” at the workplace. Half the workforce is “not engaged,” and the remaining 20% are “actively disengaged,” meaning they straight up hate their job and, “roam the halls spreading discontent.”

The levels of how “engaged” workers are might sound a little vague, so to clear them up I’ll use examples of the last three jobs I’ve had. As I’ve said, I love my current job at Geekosystem. I’m what Gallup would call “actively engaged.” When I’m at work I actively try to help this site do better. I enjoy what I do, and the atmosphere in which I get to do it. Just 30% of the American workforce feels the way I do about their job.

Before coming to Geekosystem, I worked as a substitute teacher. I didn’t love teaching, but I certainly didn’t hate it. I wasn’t miserable at work, but I was far from “actively engaged.” I showed up. Reviewed the lesson plans, and just tried to get through the day so I could go home and take a nap. I was “not engaged.” 50% of workers in America feel that way about their job. It’s not the worst thing in their lives, but it’s not what they’re passionate about.

Before subbing, I worked as a waiter and bartender in a chain restaurant, and I hated it. I hated serving people. I hated the company I worked for. I hated the customers. I hated the food we offered. I hated most of the people I worked with. When my manager asked me what he could do to make me happy at work I said, “You could fire me,” and he did. I was as “actively disengaged,” as a person could get.

To the 20 million people who currently feel that way about their jobs:

These numbers are important because the commonly held belief is that an “engaged” workforce is more productive. It’s not just good for you to have a job you love. It also benefits the company you work for, and thus the economy.

(Gallup via The New York Times, image via mickyc82)