Gal Gadot Talks Feminism, Her Time in the Military, and the Real Key to Wonder Woman’s Strength 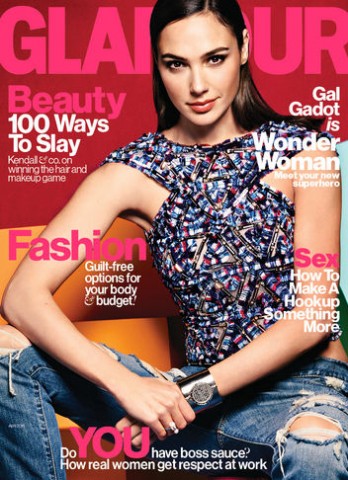 Gal Gadot graces the cover of April’s Glamour, and in an awesome interview she sheds some light on how she was cast as the most powerful woman in the DCU, where she thinks Wonder Woman’s true strength comes from, and how her time both in the military and as Miss Israel (not to mention her crazy stunts as Gisele in the Fast and the Furious franchise) prepared her to take on the iconic role.

Watch this on The Scene.

On her time in the military (like all Israeli citizens, Gadot served a couple of years in the Israeli Defense Forces) and how it led to Wonder Woman:

Let me start by saying, I wish no country had the need for an army. But in Israel serving is part of being an Israeli. You’ve got to give back to the state. You give two or three years, and it’s not about you. You give your freedom away. You learn discipline and respect. [After the army] I started studying law at university. While I was there, a casting director for Quantum of Solace saw my modeling card on my agency’s wall, and I auditioned to be a Bond Girl.

[The role] was always Olga [Kurylenko’s]. But I started going to an acting coach, then I got my first role, in an Israeli TV series. I had finished my first year in school, and I decided to stop working toward my degree when I got that project. Then that same Bond casting director cast me as Gisele in Fast & Furious—my first movie. Crazy! Whenever I met with producers, writers, or directors, I said I wanted to portray a strong, independent woman. Cut to Wonder Woman.

On what Gadot loves the most about Wonder Woman:

For BvS it was important for me that we show how independent she is. She is not relying on a man, and she’s not there because of a love story. She’s not there to serve someone else. She has so many strengths and powers, but at the end of the day she’s a woman with a lot of emotional intelligence. She’s loving.

[I]t’s all her heart—that’s her strength. I think women are amazing for being able to show what they feel. I admire women who do. I think it’s a mistake when women cover their emotions to look tough. I say let’s own who we are and use it as a strength.

On training to play Wonder Woman and how it’s affected her body:

Since I’ve started, I’ve gained about 17 pounds, and it’s all muscle. I feel so much better now. When you feel strong, it changes everything—your posture, the way you walk. I look at photos from five years ago and think, Whoa, I was too skinny. It’s not cool.

There are such misconceptions as to what a feminist is. Feminism is about equality. I want all people to have the same opportunities and to get the same salaries for the same jobs. I realize I’m doing what I want to do because of the women before me who laid the groundwork. Without them I wouldn’t be an educated working mother who is following her dreams; I wouldn’t be here.

You should definitely check out the rest of the interview over at Glamour! Are you excited to see Gadot’s first appearance as Wonder Woman in Batman v Superman? Let’s talk about the possibilities below!

(via The Hollywood Reporter, image via Glamour)