Gail Simone Will Make Sure Nightwing’s Butt Gets Featured In Her Convergence Miniseries, For Feminism 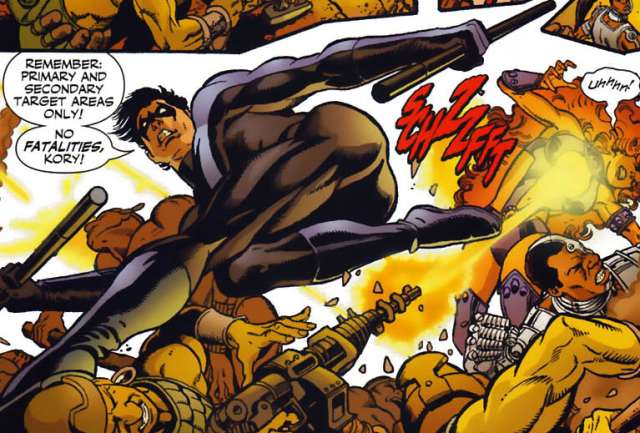 Secret Six and Red Sonja writer Gail Simone also spoke with Comics Alliance about the importance of diversity in comics, her own writing process, and her wonderful experiences working with artists and comic publishers. But c’mon. Like we’re not going to lead with butts.

In part two of Comics Alliance’s chat with Simone, interviewer and past TMS editor Janelle Asselin asked the comic book writer the most important question possible about her upcoming Nightwing/Oracle title: will there be Nightwing ass? After all, Simone’s books have a reputation for not shying away from male anatomy, and Nightwing in particular is pretty well known across the DC universe for.—and I’m quoting a Tumblr devoted to his butt, here—having “the most famous ass in comics.”

Her response, true to Gail Simone form, was both humorous and incredible poignant from a socially minded perspective:

I am writing it, of course there’s Nightwing ass! That’s a funny but true thing, I got a lot of crap in the early days for having beefcake in my books, people thinking it was me trying to put just what I like in comics. But it wasn’t that at all, it was just trying to open that door a little, to have sexy characters that might appeal to more people. It’s not enough to make comics women with similar tastes to mine might like, I want there to be characters for everyone. That’s my dream.

And it’s worth noting that some of the people doing that best are guys. It’s going to take all of us to pull the ship into this century.

Simone had other more serious things to say about the importance of research and listening to marginalized voices when creating diverse characters for comics, and specifically cited Alysia Yeoh, her transgender character for the New 52 Batgirl:

I once saw Brian Bendis give a lecture on writing to a packed house…[…] He said, no matter how much research he does, someone knows more than he does and he will get things wrong. That stuck with me, the goal is not perfection, that’s not attainable. The goal is the best truth you can achieve with your best efforts, and when you get something wrong, you own up to it and try harder next time.

Before creating Alysia I spoke with a lot of trans writers, brilliant people who were endlessly patient and helpful, it meant something to them and they wanted me to get it right. Alysia is a moment where I am very happy I worked at DC, because [DC Co-Publisher Dan DiDio]’s only concern when I brought up the idea of Babs’ roomie being trans was that it was handled with respect, and that it be meaningful in the story.

You can find the full interview, in which she discusses her newest Secret Six title and Dynamite’s role in helping her revamp Red Sonja’s problematic origin story, here at Comics Alliance. The first part, which deals with Simone’s time on Birds of Prey and her creation of the Woman in Refrigerators website, is also worth a read as well.