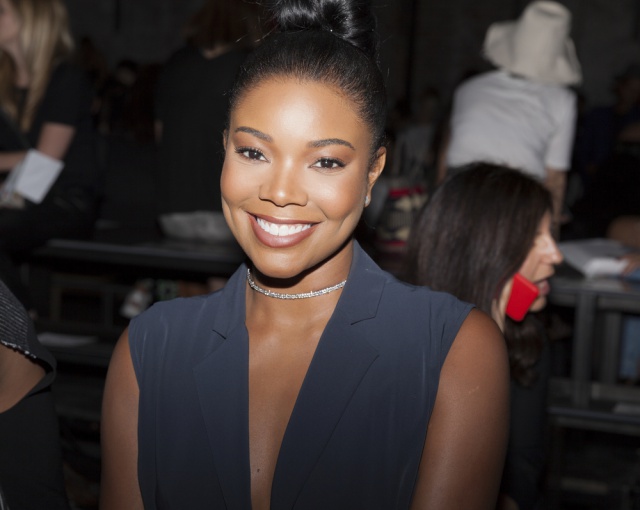 Gabrielle Union was interviewed by Lena Dunham for Lenny Letter and it was an interesting look at two women who have been extremely successful in their field and have been public figures for women’s right. With Union’s new memoir out, We’re Going to Need More Wine, where she talks about her life, her fertility hardships and career, Dunham uses the interview to give us a little more personal insight into Union.

Their friendship allows the interview to be very casual and Union proudly proclaims that she has learned not to give a fuck about what people think: “Fuck it” — that’s what I have to tell myself.”  The whole interview is certainly worth reading, but there were three sections that grabbed my interest most of all.

The first is Union talking about the responsibility that white actresses have to speak up not only for themselves, but also to be allies to women of color and other minority women by passing the mic to them.

LD: You’ve been a public figure, a successful actress, for a long time, and yet you’re still bumping up against the issue of being a woman in Hollywood, you’re bumping up against the issue of being a black woman in Hollywood — that sort of incipient struggle. I saw you talking about this with Oprah and Viola Davis, where you’re like, “There’s stuff that you are fighting for that a man in your position or a white woman in your position, who had done what you had done in the industry, would not still be fighting for.”

GU: Absolutely. That’s just what it is. It’s like, I wish I was in a place of a Jennifer Lawrence, where she’s talking about pay inequity with her white male peers. It’s like, “Hey, Jennifer, pass the mic back, ’cause the women of color behind you are making way less than you, who have ten, twenty, thirty years of a body of work, and we’re making pennies on the dollar of what you’re making.”

Union has been very candid, especially in the wake of the Harvey Weinstein allegations, about her being a raped as a teenager while she was working at a shoe store. For Union, it wasn’t just the trauma of the attack, but the stigma now put upon her that was damaging.

LD: You were one of the first female celebrities to ever come out and talk about the effects of rape and sexual assault and trauma on your life. Considering that you have always been a very measured and private person, how did you make the decision to come out about that, and what effect has it had on your life?

GU: When I was nineteen, when it happened, one of my biggest fears wasn’t so much that I was raped. It was that people would find out, and I would be an Other. You’re no longer the good kind of black girl, or the magical Negro. You become, in their minds, a stereotype. That something bad happened to me, after trying to live this perfect, completely assimilated life, that was terrifying.

I found that to be especially heartbreaking because even though we are slowly moving away from the rigid expectations of “lady-like” behavior in the mainstream media, in many communities there is still a lot of pressure to be preserved as a “good girl.”

The final part that I found interesting is when Dunham brings up the question of women of different races being pit against each other:

LD: The last question that I had wanted to ask you is about Hollywood and race. When I said my incredibly dumb shit, you were a friend. You were really straight with me, and you said, “Here are all the reasons why this was a problem.” Something you didn’t have to do but did out of love and kindness, and you did it with a firm, wise hand. You said publicly, “I’ve had some conversations with Lena Dunham about race. I wish I could talk to other white actresses.”

We had an honest conversation about the way that white women dominate the space in Hollywood, and then all the headlines were like, “Gabrielle Union shuts Lena Dunham down,” and I remember you texted me and you said, “I wish people could understand that it was possible for two women to have a conversation about the complexity of race. One could educate the other, and it wasn’t like WWF wrestling. It was a dialogue.”

I wondered how you felt about that. How do you feel about that Hollywood tendency to pit women against each other, especially women who come from different cultural backgrounds?

GU: It’s hard, because there are certain women who other groups of women have a very strong reaction to. Right? I feel like there is no amount of conversation that you could have with them for them to get it in any kind of meaningful way. Whether that’s true or not, that’s just what their perception is.

If we can have such personal conversations about our uteruses, where we’re sharing resources and information in a way that we can help each other, why isn’t our friendship big enough to have an honest conversation about race, culture, appropriation, privilege? I felt like if I can talk about my pussy with you, I can talk about race.

Now, I am not going to say anything about Union and Dunham’s friendship, because it is clear from the interview they both care about each other. However, in terms of the question itself, I don’t think it is as simple as pitting women against each other. As stated above, it is important for white women in power to use their voice to pass the mic alone. What is equally important is for white allies to understand that in the court of public opinion, their words will be judged even if they didn’t mean anything by it and sometimes you got to take the “L.”  No one is trying to pit them against each other, they are excited that someone (Union in this case) spoke up when dumb shit was said.

Regardless, it was an interesting interview, with both women’s personalities really shining throughout, and we love anything that shows what an awesome star Gabrielle Union is.