LARP Weapons Among Those Seized by Police at G20 Protests 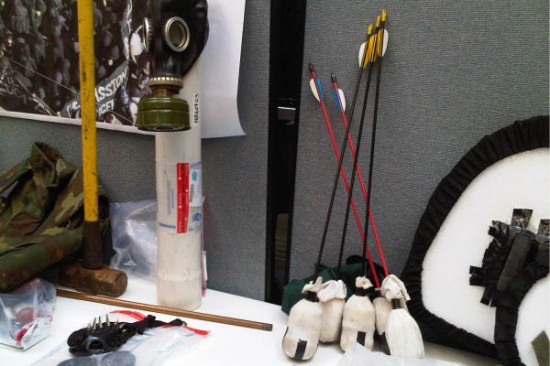 They say to never bring a knife to a gun fight. Well, Brian Barrett learned that you should also never bring blunt arrows, chainmail, plastic clubs, and foam shields anywhere near the G20 summit when protests are going on.

The Toronto Police Department is putting on a display showing the weapons seized in the arrests surrounding the G20 protests. Among these weapons are the above list of items that Barrett was carrying on his way to a live-action role-playing event. Police took the items, saying it was just a matter of him being in the wrong place at the wrong time. But that hardly makes them relevant to the display. Also shown were a chainsaw and crossbow taken on Friday in completely unrelated incidents that weren’t even near the summit.

Then some of the items taken from legitimate protesters weren’t even dangerous at all. Among them: A skateboard, some bicycle helmets, golf balls, tennis balls, goggles, and walkie-talkies. Oh, and bamboo poles. Unless the protesters were planning on performing some form of intricate fingernail torture, these hardly seem dangerous, though perhaps someone wielding them at a protest is worth arresting, just to be safe.

Needless to say, the display did not get the intended reception:

So hide your random, non-lethal objects Toronto natives, or they could end up part of the exposure of a giant, violent criminal conspiracy.

Also, they took bicycle helmets? I really hope they either took the bikes too or there were no bikes to begin with, because otherwise that’s just cruel.

(Via The Globe and Mail)