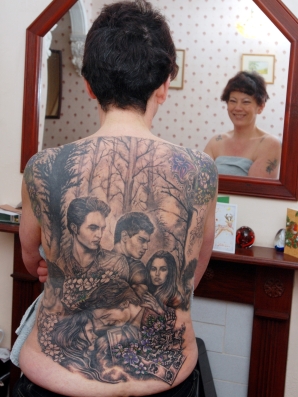 After a woman named Cathy Ward lost a huge amount of weight (14 dress sizes), she wanted to reward herself with something symbolizing what inspired her the most … The Biggest Loser. No! Twilight, obviously. She was inspired by Twilight. Ummm … congratulations?

Surely, there are mixed feelings to be had about this kind of tattoo. First, let’s assume that we all accept tattoos and don’t think they’re gross or immoral, that they’re mainstream and there are good and bad tattoos. Second, let’s pretend it’s not unusual to get a fan tattoo of any kind (sports, music, teenage vampire franchises, etc.), but not necessarily ones that cover entire portions of the body. (And yes, I realize that “entire portion” is an oxymoron.)

Now, on one hand, it’s wonderful that Ms. Ward took control of her life and lost weight the healthy way (eating right and working out). She absolutely deserves to reward herself for that kind of achievement. And is it weird that she, a middle-aged woman, was inspired by a mediocre series about celibate, vegetarian vampires? Well, as far as losing weight goes, they don’t really go together, but okay! Whatever floats your boat!

On the other hand, she’s covering her entire body with the Franchise of the Moment. A few years ago, no one was getting tattoos of “The Babysitters Club.” I mean, it would have been weird to permanently ink a bunch of teenagers on your person … and that’s pretty much exactly what Ms. Ward did. Eternally youthful teenagers on an aging body. Teenagers who will, in real life, also age, and will probably look back on this time as “when I was so nauseatingly overexposed that people went so far as to tattoo my image on their bodies.”

But on another hand, it’s not terrible work. I’ve seen some questionable portrait work, and this is actually a pretty good rendering. Kristen Stewart probably only wishes she were as pouty as she’s been depicted (she looks more like co-star Anna Kendrick in that piece), but Robert Pattison(s) and Taylor Lautner are definitely decent when compared to the reference material.

So, for this fan tattoo, while it’s rather huge (and according to Ms. Ward, unfinished), it’s better to have a huge piece of decent work than a huge piece of awful work.

(via Daily Mail via io9)