The Fuel Of The Future? Researchers Look To Aneutronic Fusion

When you’re talking about traveling through space, the less fuel you need to move a satellite or vehicle the better. Propulsion methods for objects in space need to deliver a large impact with just a little substance, which is difficult to achieve with current technology. But, a new propulsion method called aneutronic fusion may give scientists the bang for their buck they’ve been searching for.

Suggested at the IEEE Symposium on Fusion Engineering by John J. Chapman, a physicist and electronics engineer at NASA’s Langley Research Center in VA, aneutronic fusion could improve space propulsion significantly. The new propulsion method is based on boron fuel rather than deuterium and tritium, the typical fuel for nuclear fusion. With aneutronic fusion, neutrons represent less than 1 percent of the energy-charged particles that are created by the reaction, which makes it easier to manage. The new method would also only require just grams of fuel to far surpass current propulsion fuels in efficiency.

According to Chapman, fewer neutrons in the reaction is beneficial because they can be difficult to harness, and to use them you need a wall that can absorb and convert the kinetic energy from the particles into thermal energy. Chapman’s aneutronic fusion reactor uses a beam with energy on the order of 2 x 1018 watts per square centimeter, pulse frequencies up to 75 megahertz, and wavelengths between 1 and 10 micrometers which are directed at a two-layer target about 20 cm in diameter.

The first layer is a sheet of conductive metal foil about 5- to 10-µm-thick. This sheet responds to the teravolt-per-meter electric field created by the laser by acting as what Chapman calls a de facto proton accelerator. The electric field releases a shower of energetic electrons from the foil, which leave behind a net positive charge. This creates a self-repulsive force between the protons that causes the metal material to explode. The explosion accelerates protons toward the target’s second layer, which is a film of boron-11. 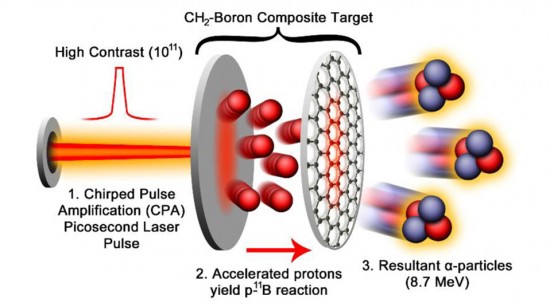 On the second layer, the protons strike boron nuclei, and form excited carbon nuclei. The carbons decay, each transforming into a helium-4 nucleus (which is an alpha particle) and a beryllium nucleus. Immediately, the beryllium nuclei decay, and each one breaks into two more alpha particles. Each proton-boron pair that reacts creates three alpha particles, each of which has a kinetic energy of 2.9 megaelectron volts. The last step is for the electromagnetic forces to push the target and the alpha particles in opposite directions. When the particles leave the spacecraft through a nozzle, that provides the vehicle’s thrust.

The aneutronic fusion system, would generate roughly 100,000 particles with each laser pulse, which makes it significantly powerful. This type of propulsion system could even be more useful because improvements in short-pulse laser technology could potentially make the thruster 40x more efficient than the ionic propulsion systems in use today. In this scenario, the boron fuel would be so powerful that a mole of it (11 grams) could yield approximately 300 megawatts of power.

According to Chapman another significant advantage to using aneutronic fusion for space propulsion is that some of the energy can be converted into electricity to power the spacecraft’s control systems. But while it seems that aneutronic fusion would be far superior there are some downsides to the idea.

One drawback is that losses from alpha particles striking the walls of the exhaust nozzle or even each other lower the output of power. Before this idea could be implemented researchers would need to figure out how to control the path of the particles. According to Chapman, perfecting a system like this for practical use propelling vehicles through space could take up to a decade of work. Still, the system presents an interesting idea that may get researchers thinking about new ways to power through space.

(via IEEE Spectrum, photos via NASA)